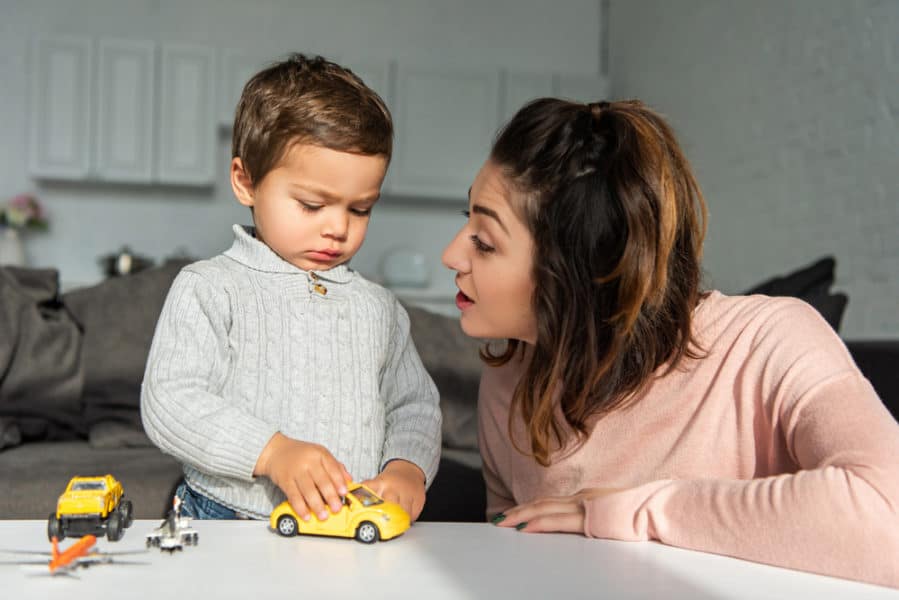 I have a 2 year old boy with a severe expressive speech delay (can complete 52% at the 3-6 month level and 47% at the 6-9 month level). He also has a lip tie (and possibly a tongue tie), which is being looked at by our dentist later this month. Comprehension wise he’s where he needs to be. He has already been assessed by a speech pathologist and is attending both public and private speech therapy sessions. He also just had a hearing test which showed fluid in both ears and low response to high/low tones. We are now waiting for a referral to an ENT for further assessment and another hearing test in a few months. So there are a lot of issues contributing to his speech delay. I should also note that he shows no signs of being on the ASD at this time as they did check that during his speech assessment.

My problem is anyone who asks why he isn’t talking (mostly MIL and her husband and FIL and his wife) listens to me tell them all these details and then says “oh, he will be fine”, “boys talk later”, “he will catch up eventually”, “enjoy the peace while you can because he won’t shut up once he learns to talk” or some variation of that.

It doesn’t help that his cousin is 6 weeks younger than him and has a large vocabulary that is growing daily, so they keep comparing the two of them. My older son had no speech issues and was singing songs by this age, so they compare to that as well. My parents are very understanding as they kept him for the first 10 months until he could get in to daycare. They worked with him while I was at work and used all the speech suggestions, etc to try to get him making sounds and talking. He gets easily frustrated since he can’t communicate and sometimes that is reflected in his behavior like grabbing and throwing toys. I am teaching him some sign language so he can at least communicate some basic needs, but people see the frustrated behaviors and think he is just a toddler with lots of tantrums and bad behavior.

How can I get the point across to the in laws (and others who ask) without screaming at them till I’m blue in the face that we are working with professionals about this and no it won’t just magically be fixed one morning and no he can’t talk as much as his cousin and that’s ok! Yes, I’m heartbroken that I have never heard him say “mama” or “dada” or anything besides “hi”, “yeah” and “no”, but we are working with the specialists he needs to get him the support he needs. They can’t seem to understand why we go to these appointments and keep saying that one day he will just start talking in full sentences. My hubby travels A LOT for work and doesn’t have to deal with his parents as much as I do, so any advice would be appreciated!

“Einstein didn’t talk until he was four!” and other assvice you’ll get

Ohhhhhh the flashbacks this letter triggered! The years (and years) of well-meaning but completely misguided words of “encouragement” and/or unsolicited advice. (Remember “assvice?” That word is way overdue for a comeback.) I can’t even fathom the number of times I was told, “Einstein didn’t talk until he was four!” or made to feel like some kind of perfectionist helicoptering headcase for taking my son for various evaluations and specialists and speech therapy.

(And then there was my MIL, who managed to play both sides, with the “oh, he’ll talk when he’s ready!” while ALSO constantly pushing dubious to downright snake-oil-y “cures” and “fixes” she read about online. Try this supplement and some essential oils! Why don’t you eliminate gluten?  Try feeding him more beets! You’re going to skip his vaccinations from now on, right?)

Coping ideas and advice for parents

1. It’s all absolutely maddening, and unfortunately, I never found a single set of magical Shut It All Down words. There was a lot of smiling and nodding in the moment (and then even more eye-rolling in the aftermath), and the occasional trying-to-sound-cheerful-but-probably-came-out-as-hugely-testy “thanks, but we’re going to follow the advice of the many specialists we’re extremely lucky to have in our lives right now.”

2. The important thing to really TRY to remember is that all those comments really do come from a place of good intentions. Your in-laws, like you, honestly want the best possible outcome for their grandson, and very likely raised their own children in a time and era before Early Intervention was a Thing. So if you can reframe their confusion over WHY you’re taking your son to all these appointments and specialists to be like any other generational parenting divide — like starting solids super early, or giving newborns extra water, etc. — that can help build a mental boundary around this topic so their words aren’t smacking extra hard against something you’re extra sensitive about.

Like, I learned early on that my MIL was a SUPER unreliable narrator when it came to her advice and recollections about breastfeeding and potty-training (SO EASY, both things! happens like magic, with no work or struggle at all! totally not sure what YOUR problem is, hahahaha!), and any input from her fell solidly in the “smile and nod, then change the subject immediately” category. The speech delay stuff might just be that category for you, for now.

3. Less is more with some people. I don’t know how much information you’re volunteering to them, but go ahead and…stop. Stop trying to get “the point” across. They don’t need to hear about every detail about every appointment or evaluation, beyond essential scheduling and babysitting needs. They don’t need to agree that all of this stuff is justified because it’s not their kid, not their call.

And in fact, because he’s NOT their kid, they’re probably always going to default to the boilerplate comments (“boys talk later! he’s fine!”) because…well, that’s easier and more encouraging-sounding than, “wow, yeah, this kid can’t talk and I’m actually really worried about him.”

(I was recently asked point-blank by an acquaintance if she should be worried about her son’s speech development and I straight-up panicked and babbled nonsense about kids all going at their own pace, blah blah blah. Meanwhile my brain was SCREAMING  that yeah, that kid needs an appointment with Infants & Toddlers and a developmental pediatrician ASAP.)

(I ended up sending an email later. It’s hard!)

4. Practice a boilerplate and simple explanation. I totally understand your (very real) need to talk to people openly and honestly about your concerns for your son, and all the work/appointments/stress/unknowns that you’re dealing with right now. Your in-laws and random parents on the playground probably aren’t those people. So try to be ready with a simple, cheerful “Bran has an appointment this Tuesday, can you watch Jon from 10:30 to about lunchtime?” or a “No, he’s not really talking much yet, but we’re working on it!” or even (if you can manage it without your head exploding) a “Yes, I’ve heard that fact about Einstein! I guess I’m raising a super-genius hahahaha!”

And then SUBJECT CHANGE. SO FAST.

5. It’s all a balancing act. When you’re parenting a special needs or atypically developing child, there’s a protective impulse to want to educate the world about them. You want the world to UNDERSTAND them, to love and accept them while ALSO understanding the unique challenges and hard work you face as their parent. It can be a balancing act then, between being open and honest about Everything and…well, avoiding the topic with certain people so you don’t blow a frustration gasket.

But! Here’s the really good part: My son talks now. He talks a LOT. He is excelling and thriving in just about every aspect of life, and still doing it all in his own exceedingly quirky and unique way.

And now my MIL tells everyone who will listen all about him, and about how hard we worked for him, how we never stopped fighting for the support and help he needed, and how much it really shows.