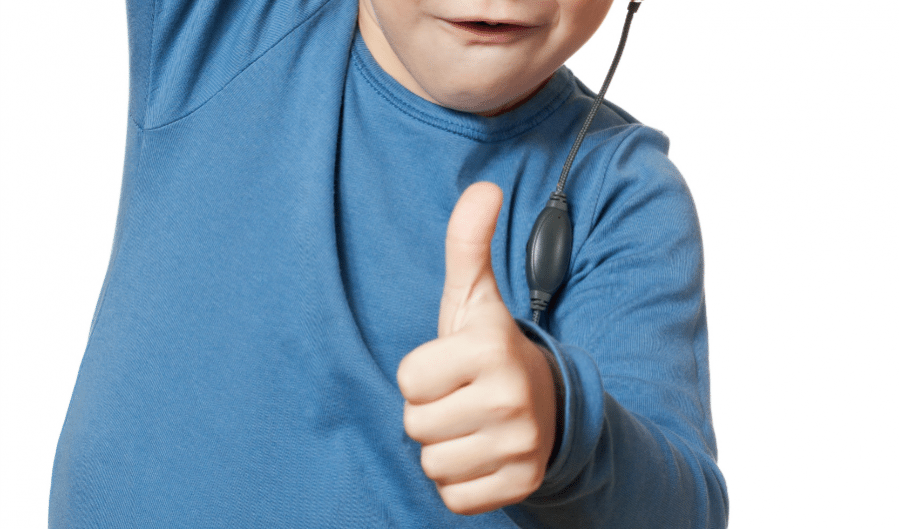 I have been reading your column since I first became pregnant, and have been following your advice since the birth of my daughter. She is a very happy, very easy kid, and we haven’t had problems with sleeping or eating (knock on wood). I’m not even sure we have a problem now, more of a question.

My daughter is now eighteen months old, and says zero words. Never a “dada” or a “mama.” I think she may have said “kitty” for a few days several months ago, but she called everything she wanted “kitty.” Since saying “kitty” didn’t get her what she wanted (including the cat, he doesn’t like her), she gave it up. She babbles in all sorts of vowel and consonant sounds, and makes “sentences” of babbles, but none if it is even close to a word.

She does communicate. She points to things she wants, waves hi and bye, shakes her head “no”, and she knows half a dozen signs. She will respond to my voice, so I don’t think there is an issue with her hearing. She can follow simple commands. Her daycare teachers say she is happy and social and on-track, but I’ve noticed that the other children in her class say “Hi” and “Bye” and even call her by name.

We just had her 18-month doctor’s appointment, and her pediatrician wants to send her to a speech therapist. The doctor has been concerned about her lack of words since the 9-month appointment. My mother didn’t talk until she was 3, and my mom says I talked late, so I wasn’t worried, but the doctor says things are different these days. Why? I thought kids developed at their own pace. I know delayed speech can sometimes be an indicator of autism, but she has none of the other autism red flags (she uses facial expressions, communicates with gestures, plays peek-a-boo, likes to hang out around other kids, plays pretend). I’m sure she will eventually say something, so why should we go to a speech therapist?

You should go to a speech therapist because your doctor thinks you should, and because you are not a speech therapist, and therefore aren’t technically qualified to be so “sure” she’ll eventually say something.  Let me be a little extra Smackdown-y blunt here: Your mother didn’t talk until she was three. Do you REALLY want to spend the next 18 months with a non-verbal child, watching her fall farther and farther behind her peers, as her frustration levels shoot through the roof? Especially since there might have been a REASON your mother spoke so late — a reason that “these days” is entirely correctable or treatable?

Speech delays can be caused by many, many things besides a child just “developing at their own pace.” And many, many things besides an early indicator of Autism. Just off the top of my head, my son attended group speech therapy as a toddler with kids with diagnoses ranging from apraxia, oral impairments of the tongue and/or palate, hearing issues, pervasive developmental delays, premature birth and probably just a few late bloomers who nonetheless qualified for Early Intervention and no doubt benefited from it anyway. (At this age, speech therapy is done through simple play and games…it’s really fun for them! And I learned so much!)

She should have her hearing checked, because again, responding to your voice is not enough alone to rule out hearing problems. She might be fine with you one-on-one in a quiet environment, but have issues in the noisy atmosphere of daycare, for example. She might have stealth chronic ear infections that she doesn’t complain about, or even just allergies causing fluid build-up. (Both fixable/treatable issues!) And since your pediatrician has been concerned about her communication development for awhile now (the doctor likely wasn’t worried about a lack of words at 9 months, but overall a delay in her sounds or other markers she may be developing, but developing consistently late), I don’t see ANY downside of heeding the advice to get a full and proper evaluation. (I should add that the gaining and then “losing” of words was a big factor in my son’s initial speech referral at 18 months as well.)

A full speech evaluation will give you a clear picture of:

The evaluation may very very well turn up nothing beyond “she’s developing expressive language at her own pace.”  Great! Now you know, and maybe you’ll come away from the appointment with some valuable tools and insight on how to better encourage your daughter to talk, maybe learn some more signs to stave off tantrums and frustration. And you can then tell your pediatrician that really, all is well, we’re just going to be patient.

But the reality is you just won’t know unless you get her evaluated, and this is so not something worth being all stubborn about because of how things “used” to be. Before Early Intervention, kids were allowed to fall needlessly behind, and kids with correctable language issues fell through the cracks. I can’t tell you the number of times my son’s very real speech delays were waved away by well-meaning friends and relatives with “Einstein didn’t talk until he was three, just relax, he’ll be fine.” And sure, I imagine at some point my son would have finally started talking.  But we chose to intervene and got him caught up sooner. Which was invaluable for our own sanity (seriously, the TERRIBLE TWO/THREE TANTRUMS ARE COMING) and preschool, and…well, for HIM, my child, who learned how to speak. The intervention wasn’t painful or pushy or took anything away from his unique special snowflakiness. It taught him to talk and communicate with the world around him, and that’s an awesome thing.