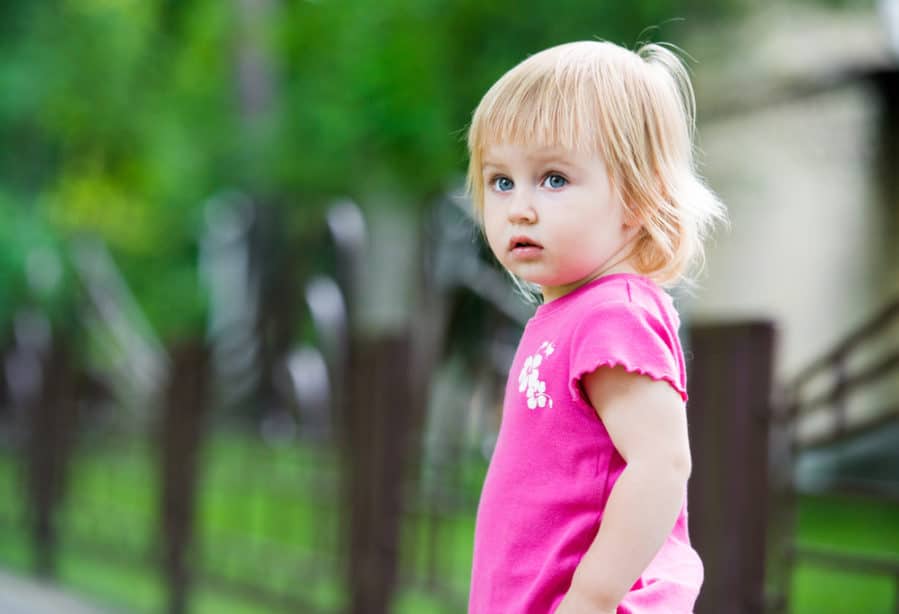 I have an 18-month-old daughter named Elle (name changed). She’s enrolled full-time at a home-based daycare in our neighborhood. There are lots of children there, and many are part-time, so it’s a little difficult to parse out the numbers, but my guess is that there are about 18 kids and 5 caretakers. Those caretakers, for the most part, speak exclusively Mandarin, so all our communication goes through one woman, Ava.

Yesterday, Ava texted all the parents asking them to pick up the kiddos at a local park, a few blocks away from the daycare. When my husband arrived he couldn’t find Elle. He noticed the Ava handing off another child to their parent, but our daughter was nowhere to be seen. He searched the playground for 30 seconds or so, then saw another daycare mother, Sarah, bringing Elle back into the playground. According to Sarah, Elle had wandered off, unnoticed, into the big kid’s playground around the corner (and down about five pretty big steps.) The parent of an older child noticed a toddler by herself and pointed her out to nearby parents. Sarah recognized Elle and brought her back. As far as I can tell all this happened over the course of 1-2 minutes.

When my husband asked Ava why Elle wasn’t being watched, she apologized and said that she (Ava) had seen him approaching and had told Elle her daddy was there. Elle got excited and wandered off to meet him, while Ava was distracted handing off another child to a parent.

Since then my husband has texted the daycare, reminding them that Elle is quick and quiet. When I dropped Elle off this morning Ava apologized again and assured me this had never happened before. I reminded her that Elle has a tendency to wander off and they need to keep that in mind, especially during outings. I accepted her apology and told her we could move past this.

The thing is… I’m not sure if I can move on. When I think about her wandering off and no one noticing I feel sick to my stomach. And Elle doesn’t technically need to be in daycare. She started 6 months ago so I could go back to work full time, but that job didn’t work out. For the past month, I’ve been trying to get a freelance writing career off the ground, but I’m not currently making any money from that. I could very easily pack it in for now and pull Elle from daycare. But, apart from this one instance, both Elle and I are happier when she’s in daycare. She has fun and learns, and I find the time we spend together in the evenings and weekends is so much more fulfilling than when we were together 24/7. I do have a lot of guilt about not wanting to be home with her full time, but I have been trying to work through that. This experience has made that guilt flare up big time.

My husband thinks we should let it go, but I am not sure if that’s irresponsible of us. Thoughts?

I would also have a very, VERY hard time moving past something like this. I mean, toddlers wander, mistakes happen, nobody’s perfect, but…

There are a couple other things jumping out here that give me additional pause about this particular daycare setup. First, the fact that you aren’t 100% sure of the kid-to-caretaker ratio at all times. The actual laws vary by state, but here’s a general overview on ratios and group sizes from ChildCare.gov. 18 kids and five adults is a perfectly fine ratio, provided that’s actually what’s happening throughout the day when the part-time kids circle in and out. But I don’t think this is something you should have to guess at or estimate! The daycare should be upfront and transparent about it!

And obviously I don’t have all the details about the kids’ ages, groupings and the daycare’s facilities, but 18 kids in a single home-based daycare is…a lot. (Most home-based group care is limited to 12 children and two caretakers.) This sounds more like a larger commercial daycare setup, which makes me wonder if it’s being operated 100% on the level and within the limits of its home-based license. (And whether all those caretakers are being paid fairly and above board.)

So, I personally wouldn’t be able to move forward without a deep dive into the center’s licensing and a clearer sense of the child/caretaker ratio.

But if you’ve done all that and everything IS kosher from a licensing/insurance/enrollment standpoint, there’s still the issue of what happened on that playground. I don’t care that it has “never happened before,” because…well, it happened, it happened to YOUR 18-MONTH-OLD CHILD. And no offense: Elle is hardly a wildly special unique little snowflake when it comes to wandering off. They ALL do it.

I’m wondering about the timeline here — 30 seconds, one or two minutes, etc. Our human brains are actually pretty terrible at judging short passages of time, so what might have FELT like one or two minutes to Ava was likely…a lot more.

So her version: She saw your husband approaching, said something to Elle, and then presumably assumed your husband would have a visual on his child while she handled the other handoff. But….Elle was already long gone by the time your husband finished his approach, and went somewhere completely different from where he was (so not sure about the “Elle got excited and wandered off to meet him” bit of toddler blaming). This means an 18-month-old was able 1) walk to the edge of one playground, 2) get down five big steps, 3) wander onto a different playground around a corner, 4) be there alone long enough to attract attention from a stranger, 5) get then recognized and handed off to someone else…all in “one or two minutes?”

Dunno. Your toddler may be fast but that’s like, Dash Incredible.

I think it’s more likely that she saw the other playground and wandered off to play on it at some point, and nobody noticed until your husband showed up. Whoever was tasked with supervising her dropped the ball, and Ava, when questioned, tried to downplay the situation as much as she could…and everybody is incredibly lucky that Elle didn’t get hurt and that another mother was paying attention. Or not, and the story you got from Ava actually did happen and the window of time was, in fact, just a minute or two. Either way, hopefully lessons were learned and outings to the park will be handled differently and with much more care going forward.

So while no, I don’t think you’re overreacting here — this was a really big screw up and I’m not convinced they’re being 100% straight with you on the specifics — but I also totally understand that if your interactions and experiences with this daycare have been universally positive and great, it might be worth moving past and putting it behind you. (AFTER doing some due diligence on the enrollment/ratio/licensing stuff.) But personally, I’d probably explore other daycare/childcare options before doing that, if only to ease that bad feeling in the pit of your stomach.

And now on to that last paragraph: I’m sorry that your guilt over having your daughter in daycare at all is making an unfortunate situation even worse. But I don’t think you have to have an all-or-nothing reaction. If this particular daycare has lost your trust, you don’t need to take that as a Sign From Above that you are a selfish monster for putting her in daycare at all, or that this was somehow your fault because she technically doesn’t “have” to be there, and your penance must be to be a full-time SAHM while simultaneously trying to launch a freelance career and likely feeling like a miserable failure at both.

Take a look around. See what other toddler programs are available. Drop her down to part-time at the current center (maybe to a shift/schedule that doesn’t involve a lot of offsite outings), or look into a nanny or mother’s helper. You can be unhappy with this daycare without feeling like you have to justify using a daycare at all.

1. Daycare Drama: When To Call It Quits
2. When to Pull the Plug on Your Daycare
3. Picking Your Daycare Battles