Twitter Facebook Pin It Email Article
Prev Homemade Baby Food When You’re Away From Home Next The Non-Joys of Breastfeeding, Part One: THRUSH
Baby

What To Do When You Suspect Your Child Is Speech Delayed 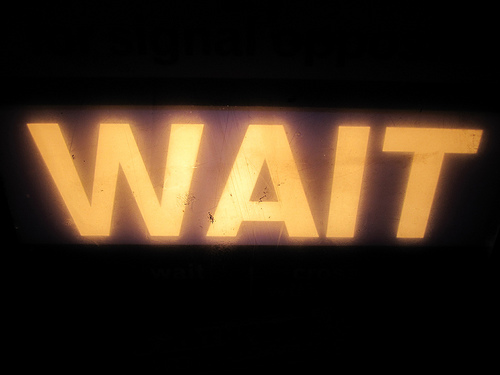 I have read your blogs for months, and I find them to be spectacularly hilarious and full of good advice. I wuv yoo! Anywhoodles, here’s my question…I have a daughter who is 13 months old. While other babies can at least say Mama and Dada, she can’t. She babbles away constantly, and has seemed to master the word “YAH!”. (Which, I’ll admit comes in handy if I want my SO to agree with me. I just ask if she thinks it’s a good idea, and she says “Yah.” From the mouths of babes….) Problem is…That’s the only word she knows, (except for mimicking Mommy’s use of the “F” word…) and she can’t associate words with people or actions. I’ve tried asking, “Up? You want up? UP?!” when she’s holding her arms out, but she doesn’t seem to get it. She can’t associate the two. While most toddlers can at least say Mama & Dada and associate their parents with the words, she can’t. My SO and I talk to her constantly, even if it’s explaining that I’m chopping vegetables for dinner. Point it, we talk to her all the time. I read somewhere to say the words she says back to her, and say things like, “Oh really? That’s so interesting, what else?” And we do that, but she’s just not getting it.

Thank you, O Wise One of the Internets, One that I worship.

Sincerely,
Freaked The F Out

“Is there a way to tell if your child is definitely speech delayed?” At 13 months? No. I do not think so. 13 months is entirely too young, too early. We did not get our first red flag for speech until Noah’s 18-month visit, and that’s because he just barely failed the five-to-10 word marker. (He said Mama, Dada, aball, anana and that was it. And he was DEFINITELY not saying those by 13 months, either.) And we were still told to give it another three months and come back if we didn’t see an improvement. And…okay, we didn’t see an improvement, and we went back, and were referred to Early Intervention. Who were extremely impressed, actually, that our pediatrician referred us so early. Most doctors will indeed wait much, much longer to bring up the possibility of a speech delay to parents. Late bloomers, late talkers, etc. This isn’t to say that’s a GOOD thing, the waiting-until-two-years-old-or-maybe-three, but…13 months? Oh, honey, don’t freak out just yet. Really.

The best, best, BEST book I have ever read on early speech development is “It Takes Two To Talk: A Practical Guide For Parents of Children With Language Delays”. Not a cheap book, no. $50. Textbook pricing. I borrowed a copy (deposit required!) from our county’s Early Intervention program while taking the accompanying Hanen program through them; you may be able to track down a secondhand copy online or through your library or pediatrician. But if you really, really want to understand how language develops and learn exactly how you “should” be talking to your child to help with that development — in super-breezy, easy-to-read terms — this book is amazing. (And amazingly simple, to the point of slapping your head after realizing that all you had to do is *tweak* your conversations with your child in the slightest way to maximize their expressive language responses.) You’ll also be able to pinpoint exactly where your child is in their language development and figure out whether your expectations are actually reasonable, and how best to help them move into the next stage of language use.

At 13 months, your child really (REALLY) doesn’t need to have a ton of vocabulary. Some kids do, and that’s fan-freaking-tastic for them. Some kids don’t. A lot of ’em, I’d wager. (Like I said, I was all kinds of blissfully ignorant at that age, when we didn’t even have YAH.) (Which is ADORABLE!) You mentioned your daughter will hold her arms out when she wants “up.” That! Right there! Big! Awesome! Expressive gestures ARE language: pointing, waving, clapping, etc. And here’s the thing: some kids don’t mimic. They aren’t going to parrot back whatever you say. Your daughter puts her arms out, you say UP, she thinks, “Yeah. Up. That’s what I want.” You’ve already gone and said the word/concept that she wants, so why in the world would she say it now? UP, WOMAN. WHAT YOU JUST SAID. GOD.

The Hanen book uses this dumb little acronym. O.W.L. Observe. Wait. Listen. You see your daughter with her arms out, or contemplating a ball, or pointing at the milk carton on the counter. You DON’T supply the word. You DON’T say “UP” or “BALL” or “Milk? You want milk? Milk? MILK MILK SAY MILK MMMMMMILK.” Instead, you say nothing. You wait. Waaaait. Maybe you gesture back. Point back. Let her (yeah, I know) get a little upset. Let her really understand why expressive language is important.

And then you listen. Maybe she’ll say, “Uh! Uh!” instead of “Up! Up!” Or some long mmmm sound instead of milk or SOME kind of verbal cue to express what she wants. After she makes an attempt at a sound, you can THEN supply the word and a heapload of praise and an immediate granting of her desire. Up. Milk. Juice. Whatever.

And oh, simplify. I was super guilty of this. She’s not ready for sentences yet — and she’s not going to get much from “Oh really? That’s so interesting, what else?” Hell, my almost-four-year-old still doesn’t know what to do with vague, open-ended questions like that. Strip your language down to simple, single words and ESPECIALLY sound effects. I’ll never forget after our first speech therapy session, the therapist told me to take Noah outside and blow bubbles some time that week, and spend the entire time focused on three words/sounds. 1) An exaggerated blowing sound, in hopes that Noah would mimic the puckering/blowing and work his mouth muscles, 2) The word “POP,” whenever the bubbles…you know, POPPED, and 3) the sign and word “MORE.” I felt like an IDIOT. I mean, Noah and I blew bubbles all the time! Are you telling me I was doing it WRONG, or something?

Well. I guess I was. I said nothing else besides POP and MORE, and it took exactly 15 minutes before my child popped a bubble, looked at me expectantly, and then when I failed to say what he was waiting for, said, “POP!” all by himself. Within 20 minutes he was signing for “MORE” after I put the wand back in the bottle and stared at him, pretending to have no idea what in the world he wanted. Give everything a sound: pop, woof, choo choo, vroom, etc. These seem to be more attractive to little ears and mouths than the proper nouns, which: WHO CARES.

And speaking of sign language…yeah, I was one of those people who thought baby sign language was just for the neurotic child-prodigy set, for the parents who needed an activity in between Chinese Mandarin and Baby Mensa Playgroup. And then my kid didn’t ever talk, and my pediatrician recommended teaching him some signs to ease both of our frustrations with the situation. We used the Signing Time DVDs (now available for streaming on Amazon) and within two or three viewings, the light bulb went off over Noah’s head. He signed “milk” one morning and my lands, I have NEVER gotten milk into anyone’s hands so quickly. He stared at the cup for a minute and I swear you could see the wheels turning and the pieces coming together and the huh. If you notice that your daughter really doesn’t make any close approximations of sounds no matter how long you wait for them, sign language might be a more natural transition from gestures to language, at least for her. And, you know, hundreds and thousands of kids who develop at their own pace, march to their own drum.

Look, I’m the LAST person on earth who wants to pull the “whatever, don’t overreact, don’t compare her to other kids” crap. I knew — KNEW– something was going on with Noah just…what? five or six months past your daughter’s age. I didn’t know exactly what was going on — I once heard someone describe speech therapy as the “gateway drug” to all the other many wonders of Early Intervention and SID and ASD, and damn, if that ain’t the truth — but my gut knew, and thankfully our doctor didn’t sweep my concerns away with a dismissive wave. So…this is NOT a dismissive wave.

Get your hands on the Hanen book (I had to return mine to the county or I’d mail it to you in a second), or something that someone in the comments recommends (I read a few speech delay books, I admit, but just flat-out got the most from Hanen). If you really don’t believe that she connects “Mama” with you, I’m not going to tell you that oh, PISH, everything’s fine. (Though I admit that’s a hard one to test out, especially when Mama is right there — the little ones LOVE to take our existence and presence for granted. Maybe get some picture cards or toys and test out other words? Like dog or car or ball? She may not point, but she might give you some indication that she does indeed connect words with objects.) Try out some sign language. Tell your pediatrician that you’re concerned at her next visit. Don’t panic, don’t freak out. Listen to your gut…but also make sure your gut isn’t engaged in a game of oneupmanship with the mommy next door with the potty-trained one-year-old who speaks in complete sentences on-demand like a performing-monkey child.