Homemade Baby Food When You’re Away From Home 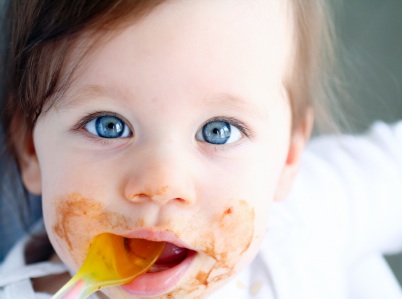 So after your little how to on making baby food, and my new son’s immediate interest in eating me out of house and home and funding Gerber’s next major jet purchase, I decided to take the plunge. Yay! Babyfood is easy and cheap and he likes it! Yay! Now here’s my problem. This August, I am going to go to the beach with my parents for 10 days. I am really looking forward to this considering the eldest boy has not seen the ocean yet and it will be 10 days of grandparents galore.

However, I am wondering what to do about the whole baby food issue. The baby will be about 8 months then, so I am hoping he will have some Cheerios and things like that in his diet but if not I am stuck with two choices: Either buy food (which I don’t think he’ll eat now to be honest), or spend time making food when I could be visiting and having fun. Also am not precisely sure of what I will have available to cook with in terms of pots and pans and the like. I know I will be bringing my own blender but the glass bakeware and steamer etc. seem like a lot to pack.

What do you think would be the best solution to this issue? I am writing you extra early in hopes that you get to this before I go!

Last week we went to the beach — not for quite as long as your trip, but it was my own personal test run of trying to pack enough food for an eight-month-old Godzilla baby, in a place with VERY limited freezer/refrigerator place and a kitchen that I REALLY didn’t want to be dirtying up with sweet potato skins and barley-caked pots. (Jason’s aunt and uncle are retired and live at the beach year-round, and have spent a good decade getting everything down to a perfect, organized system in a small condo — houseguests descending with bags of groceries mess up the system. As the niece-in-law, I DO NOT MESS WITH THE SYSTEM.)

You didn’t specify whether you’ll be driving or flying — if you’re driving, you’re golden. (More on flying in a bit.)
Everything I packed for Ezra fit into a single six-pack cooler (with room for ice packs and some water bottles for us). I brought two 8-ounce jelly jars filled with fresh fruit purees — apples and pears, made the day we left in a frantic oh-God-everything-is-gonna-go-bad-quick-USE-IT flurry of peeling and pureeing. Then another jar with leftover homemade Shepherd’s Pie that Jason and I had made for our own dinner but ended up being a HUGE hit with Ezra (hint: use a cauliflower puree instead of mashed potatoes on top.) These jars, plus one small carton of plain whole-milk yogurt and a small container of some ripe peach slices were the only non-frozen things I brought because of 1) limited fridge space, and 2) you really do need to use up fresh stuff within three or four days before freezing it anyway.

Everything else I brought was frozen in convenient ice-cube-sized portions and placed in plastic freezer bags. I placed as many cubes in each bag as I could — mixed veggies, blueberries, corn, sweet potatoes, lamb & lentil stew, barley & mushrooms, cauliflower, oh my! — and laid them flat in the cooler, layered between the ice packs. For five days, I brought two quart-sized bags and probably only used about half of the cubes I brought.

For dry ingredients, I brought a box of baby oatmeal cereal (for thickening his morning fruit-and-yogurt or any frozen purees that defrosted a bit on the watery side) and some baby finger snacks — Cheerios, Mum-Mums, fruit puffs. And that was it, plus a couple bottles, formula and mah boobs.

The good news is that by eight months old you have a LOT of table food options. Ezra gets something from our plates pretty much every meal these days in addition to his own purees and stews and baby snacks. Most of our meals contain SOMETHING that can be modified for him, either with a little extra cooking or chopping/blending or leaving certain ingredients out. If not, there are plenty of easy baby finger foods that don’t require a lot of extra special packing (provided you have at least a decent-ish stock of grown-up-human basics). Ezra’s already used to his food not being THAT different from what we eat, and (THANK GOD) will gamely try pretty much anything we put in front of him.

(Green bean salad was a big hit on the trip, as were Belgian waffles.)

(Though by this age Noah was already staunchly rejecting more foods than he was accepting — he’d touch foods to determine if they were a texture he preferred or if it “squished,” and would only try stuff that was bread or cracker-like. Sigh. Ezra is totally my do-over baby.)

Some stuff I did to stretch our food supply and minimize my time in the kitchen: Spread fruit puree on a piece of bread and cut into small squares rather than spoon-feeding an entire serving. Microwave one small portion of squash/broccoli/frozen peas in a small bowl with a teaspoon of water instead of trying to steam a whole fresh batch. Hell, Ezra ate torn-up bits of American cheese while I grilled a sandwich for his brother, and they shared bowls of Annie’s Mac & Cheese. As much as I enjoy creating and cooking special, custom dishes for Ezra, it’s REALLY REALLY NICE sometimes to not treat his mealtimes quite so preciously and hand over “real” food to try.

Now. This July I’ll be flying to BlogHer with Ezra in tow (that is, if he doesn’t wean between now and then, which sadly seems kind of likely, THANKS KID) (SOB), and that will be a whole other mess. A cooler is just NOT something I’ll feel like dragging along, and neither are bags of groceries or shoving mason jars of applesauce into our hotel’s minibar. Once again, I’ll be REALLY relying on the kindness of table food — scoping out the side dishes like mashed potatoes and steamed vegetables, plucking out pasta noodles and small bits of chicken, hoarding the fruit salad and mini-boxes of cereal — and likely just buying some additional supplies. (If you have access to a kitchen on a vacation AND time to scope out a decent grocery store, check out the places where you can buy Happy Baby’s line of frozen baby food, which I have not tried, but seems like it would be a bit more similar to homemade? Ehhh?)

No, since I’ll be traveling on my own and packing as lightly as possible, I’ll be trying out JetSetBabies.com (via a recommendation by CoolMomPicks). Place your order a couple weeks before your trip and your food and diapers and formula and anything else you need will be at your hotel at check-in time. Their food offerings are limited to Earth’s Best and Gerber (but also include Gerber’s Organics), which…yeah. Ezra’s gotten a tad snooty about the jarred food as well. He will, however, eat anything vaguely sweet, like fruits and sweet potatoes — provided I thicken up the watery texture with some dry cereal. He (surprise!) refuses most of the jarred green vegetables and makes terrible faces whenever I try the “fancy” stage three soups and stews, so I’m not even going to bother with those. We’re on vacation! If I get to live on room service desserts and swag-bag-junk-food and CHEESEBURGERS, I figure a couple days of nothing but applesauce and pears for him are FAR from the end of the world.

Anyone else have any travel-with-baby feeding advice? Pleeeease?