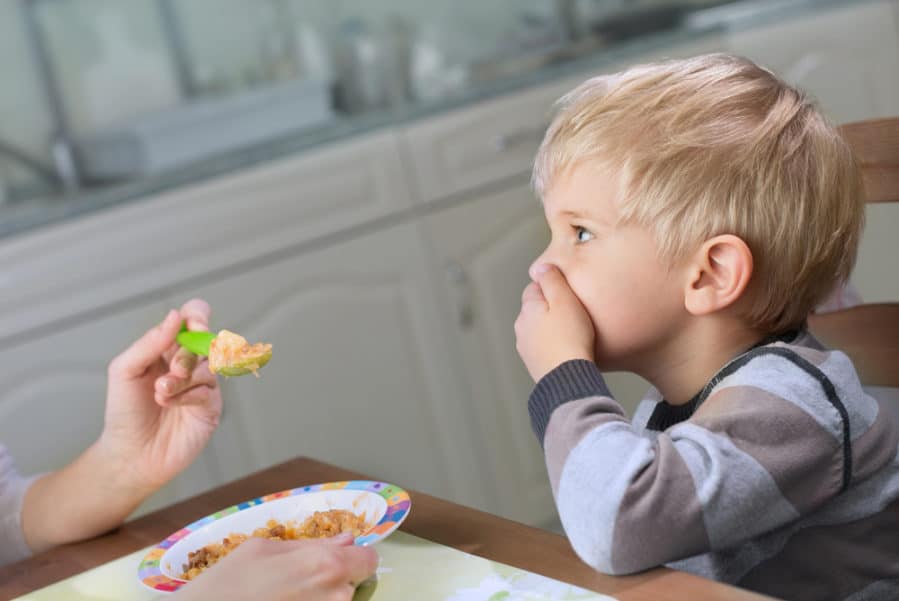 How To Stop the Picky Eating Monster

I have recently found Alpha Mom website while seeking advice on how to deal with my strong-willed 18-month-old daughter.

She’s been a great eater since the beginning. At 8 months she was already eating our exact same food and really enjoying it! She’s super independent so we encouraged her to feed herself and play and be messy with food.

However, things have drastically changed over the past 2 months. She first started refusing pasta with sauce, then lost all kind of interest in meat, poultry and fish (which she absolutely loved!). Suddenly she was requesting fruits and cheese for dinnertime, which we would only give her after she ate some of her food. It’s hard not to give her what she’s asking for since she’s doing such an effort to communicate and has learned so many words lately! But of course, we can’t let this situation go on much further.

During the day she stays at home with an incredible nanny who has tons of experience with babies. I know she behaves with her much better than with us and has always eaten brilliantly with her. The nanny prefers to spoon feed her while my daughter grabs some finger foods. You can’t imagine how many times the nanny and I have talked about how well she was eating and how curious she was about new foods.

After spending a couple of days reading your advice to other parents, I realize we have totally caved in and started preparing foods we think she might eat, instead of just thinking of nutritious meals for the whole family. Since she loves rice, we have been mixing it with eggs, veggies, fish, etc., so to make sure she’s eating a variety of foods. Because of this, her list of “acceptable foods” has decreased significantly.

On top of this picky phase, she has also started refusing to sit at her high chair. She was the kind of baby who would fight to get in at first, but then enjoyed finding news foods at her tray. This time it kind of feels like she’s fearing the chair. A couple of times we managed to get her in but she panicked, she basically stopped breathing! She’s been developing some fears lately… which I am afraid might be linked to having very loud noises in the building where we live (including the fire alarm).

Basically, we have gone from a child who would enjoy eating her foods at her highchair… to having her sitting on my lap (when she’s not running around), refusing food after food. We have tried a booster chair, and having her directly on a normal chair… but no, she has to be with mommy. The nanny says that she sits perfectly by herself when they are alone during the day.

I really don’t know what to do. The Satter method sounds fantastic and I have already ordered one of her books… But do you recommend starting at such an early age? Should I start by having her sit all by herself? I feel like first I need to read the book, explain it to my husband and nanny and then have all of us implement. But in the meantime, what do I do with her?

Yes, the Satter method is absolutely appropriate for an 18-month-old; in fact, I recommend parents buy the book as soon as solid foods are introduced! It’s such a sane, common-sense approach and can really, TRULY help avoid the common mistakes and pitfalls and anxiety-fueled freakouts we parents are all prone to when it comes to feeding our small, stubborn people.

Basic Feeding Pointers You Should Be Following NOW

And after reading your letter, I can condense it down to three main points:

So step one and two are pretty self-explanatory. She eats what you eat from now on, with only minor accommodations when necessary (like for chewing/swallowing safety, spice levels, etc.). If she refuses to eat that food, THAT IS FINE AND OKAY. She will not starve or lapse into a malnutrition coma because she skips a meal. Breakfast is right around the corner; she’ll survive until then.

She is likely getting PLENTY to eat during the day, given what your nanny is reporting. She is likely just…not hungry at dinnertime, or at least not hungry enough to try something new. (This is another point Ellyn Satter does an excellent job hammering home: toddlers and small children are actually very efficient at managing their own calorie intake and hunger signals –while we adults tend to have a super-skewed perception on how much food is “enough,” and like to eat for reasons that aren’t always 100% hunger/nutrition-related.) So your “job” at dinnertime is not to “make” her eat more. Your job is to make food available in case she is hungry, and to make mealtimes pleasant even if she’s not.

So by all means, stop cramming/forcing her into a high chair if it upsets her. Let her sit next to you on a regular chair. And then let her NOT EAT if she doesn’t want to! It’s really okay, and I’d go ahead and expect a few dinners to go by untouched while she adjusts to the new normal of 1) meals that don’t cater to her ever-shrinking circle of acceptable foods and 2) Mommy not giving her loads of extra attention via a lot of begging/cajoling and an endless smorgasbord of alternate food options.

(That you know she probably won’t eat anyway! So just go ahead and eliminate that stress from your meal AND hers.)

Note that I’d avoid letting her sit on your lap throughout the whole meal, however. She can sit on your lap once you’re done eating, but until then it’s okay to enforce the expectation that she can sit nicely at the table and color or play with a pop-up book or something. “You don’t have to eat, but please sit next to Mommy and keep me company while I eat.” Give her lots of positive attention and praise her (even if it’s just for sitting still for 30 seconds before running around again) and give her ZERO attention when she acts up or misbehaves. Keep eating, talk about how delicious everything is, and give her non-food-related reasons for wanting to come back to the table to bask in your attention once again.

So that’s phase one of the Satter Method: Eliminate the mealtime battles by refusing to fight them anymore. She doesn’t eat? FINE BY YOU. YOU DON’T EVEN CARE.

Of course, your brain will be SCREAMING at you the entire time that it’s not fine, and you do care, oh you care ever so desperately, so that’s where phase two comes in: How to reverse the vicious cycle of picky eating that the short-order cooking/catering to her preferences created. Again, the Satter book (that I assume you have by now) will give you excellent sample schedules for this age and how to space out meals and snacks so you’re set up for success — so she will actually show up to a meal made up of non-preferred foods and be hungry enough to give up her side of the battle and eat the stupid fish/chicken/vegetable.

(It took my preschool-aged son about three solid meals of Not Eating Anything — save for milk and some cereal at breakfast — before he caved and ate a plate of fish sticks. You have no idea how much of a Win those damn fish sticks were for us.)

You’ll want to enlist your nanny on this part — make sure your daughter is getting exposed to a wider variety of foods during the day, is not loading up on too many snacks, and ask her to please retire the spoonfeeding. An 18-month-old should be encouraged to feed herself with her own utensils and manage her own meal portions and calorie intake. (Because again, she can do that! We want her to do that!) If she eats — even it’s rice or fruit or crackers — and asks for more, great! Go get her some more! But try to avoid meal setups where she’s being pushed to clean her plate or accept “oh just one or two” more spoonfuls than she really wants. Take that “strong-willed” label and swap it out with “independent.” If she can feed herself independently, she will naturally grow to feel more in control and less fearful around mealtimes and new foods in general.

Empower your Young Ones

(This is another reason I’m a huge advocate for letting small children help with meal prep as soon as realistically possible!! Give them a sense of control in a world full of chaos.)

Because don’t get me wrong, the fear IS real at this age — of new foods, people, places, etc. Things are scary when you’re a very small human with very little agency in a VERY HUGE world, so toddlers will cling to the familiar and the routine with all of their tiny might. So instead of making dinnertime All About The Foods She Won’t Eat, make it pleasant and calm and a happy/warm/attention-filled time with you and her dad.  In the long run, that’s what you want her to remember anyway, rather than whether she ate the green beans or not.

More on Mealtime Battles and the Satter Method here: