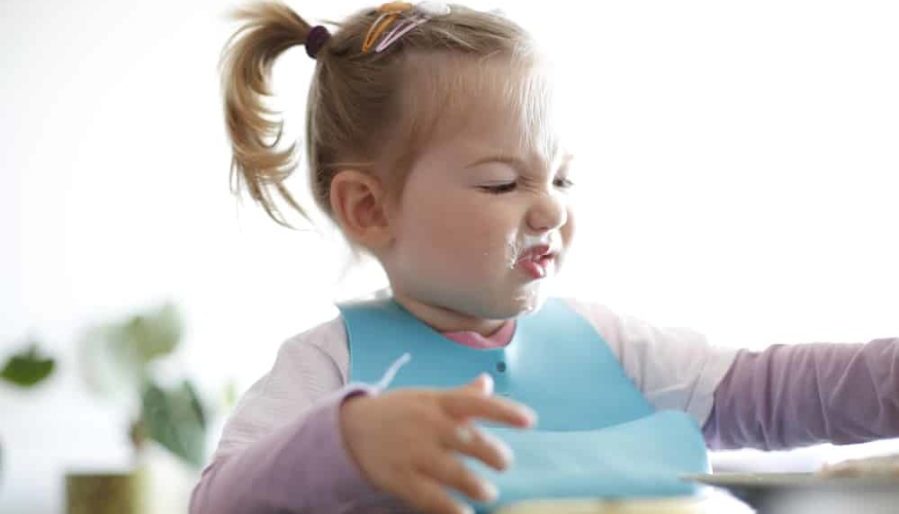 I’m afraid we’ve broken our previously “good eater.” Our daughter is 3 years old and has generally been a good eater since starting solids. She eats (or ate) a wide range of foods, including proteins, grains, vegetables, and fruit, although predicting what she’ll eat on any given day is difficult (and she definitely does not like leftovers). We’re stuck on a pretty early dinner schedule (dinner around 5:30) and we (usually one parent and the kids) get home around 5 at the earliest. So if it’s not in the slow cooker or leftovers, dinner is a bit difficult.

Add into the mix a new baby whose bedtime is ASAP after getting home due to poor naps at daycare (he’s 7 months now), and dinnertime gets crazy. We’ve slipped into preparing a separate dinner for the toddler most nights and if you’re preparing a special meal, you might as well make it one you know she’ll eat. Sometimes it’s sort of a snack tray – veggies of some sort, some cheese, crackers, fruit, etc. Or pasta and veggies.

But slowly we’ve noticed that she is less and less willing to eat or even try the main meal when we DO have dinner together. I try to have something on the table I know she’ll eat (like if I make some sort of stir fry or curry, I keep the rice separate because I know she’ll eat it). We try to at least roughly follow the division of labor in eating where we provide a balanced selection of food and she decides what to eat (although we strongly encourage that she at least tries everything on her plate and eats some veggies before getting seconds of her carbs).

Overall I think she eats pretty well, but I see us slipping down a slope. She used to eat chicken, tofu, lots of veggies, other meat, cooked beans, etc. and over the past year, I feel like it’s shrunk to a handful of items – especially in the protein department.

Is it normal for kids to become pickier over time (not just type of food but how it’s prepared)? Should I be worried? How can we encourage her to keep trying new foods and eating a well-rounded diet (while also having family meals that are interesting for us to eat. I love to cook but get frustrated thinking about meals to make that won’t be rejected sight unseen)?

Alas, you have stumbled onto the inevitable result short-order cooking for a toddler. As soon as those tricksy little humans latch onto the idea that meals can be made entirely to their (ever-shrinking and unpredictable) preferences, then SO SHALL IT BE FROM NOW ON.

I am not shaming you here though! You’re doing the best you can and DEAR GOD, I know how insanely frustrating it is to watch your child reject food outright and then behave like a pill at the table. I know how insanely difficult it is to balance multiple schedules and bedtimes and mealtimes. You have a 3-year-old and a baby! You are in the trenches, Mama, and I get that.

(Last night my husband and I had a date night and before we left I made two boxes of Target-brand mac-n-cheese, sliced up an oldish cucumber and ripped open a bag of baby carrots. Just sharing that in case anyone thinks I’m pretending to be some Absolutely Perfect Parent who never goes for the “Kids’ Dinner,” which is what my children call any meal they eat separately. Kids’ Dinners are of course their favorite and are always met with much rejoicing that they don’t have to eat the usual lovingly prepared-from-scratch-meals I make most nights. So. Yeah.)

(I also realized none of them had ever tried ranch dressing so I gave them some for veggie dipping. It went universally untouched and untasted. RANCH. DRESSING. IT’S LIKE WHITE KETCHUP.)

Strategies for your Picky Eater

ANYWAY. Is there any possible way for your daughter to eat the “main meal” with you more often? Could you give her a snack instead when you get home at 5 to hold her over? Even if it’s just a smaller portion of what you’re typically feeding her now (which is already pretty snack-y)? You didn’t mention if she also has a super-early bedtime so that might not work, but if you CAN, I’d do it. Three reasons:

(And since she’s had a snack around 5 p.m., you don’t really need to stress too much if she refuses to eat anything at 6:30 or 7. Try to suppress your silent scream of frustration over any food rejection and focus more on reason #3 instead.)

You don’t even have to nail the whole family sit-down dinner every night! Even just a couple nights a week, when you’ve got the slow cooker together or some leftovers. (And yeah, sorry, she can deal with being served leftovers just like the rest of us do.) Save your cooking efforts for the weekend and try to menu plan/prep when you can — think stews and curries pre-prepped in plastic bags that can be heated up quickly and only require a side of noodles or rice, frozen lasagnas or stuffed shells, etc. (The Internet is overflowing with ideas for dinners like this; maybe aim to try just one or two of them a week.)

Or look into a meal delivery service! We use Blue Apron (#notasponsoredshoutout) but there are others that focus even more on speed and zero prep that can get a complete meal of protein/vegetable/carb on your table in like, 15 minutes. I don’t think I’d enjoy the ones where you’re expected to microwave everything (like steaks?!), but there are others that come basically fully prepared yet still include some proper cooking. Again, if you can try for three weeknight dinners that involve you, your partner and your daughter eating together, I think you’ll really be able to get her out of this picky eating regression and back on track.

Manage Expectations of your toddler and of yourself

Since you mentioned the division of labor/responsibility, I assume you are familiar with Ellyn Satter’s books and method. Go re-read the chapter about toddlers jerking you around at the table before your first family dinner, take a deep breath, and prepare yourself for her to not eat a damn thing. At first, anyway! Once the new expectation that dinner will be more than cheese sticks and buttered pasta becomes more of a regular-ish thing for her, things should improve.

If eating together is 1,000% not a possibility during the week, then I’d suggest focusing all that meal-prep energy on making her meals ahead of time. Make her actual proper meals instead of glorified snack trays. A batch of chicken soup with noodles, a mild turkey chili with beans, some make-ahead ramen broth that you can microwave really quickly and then toss in some noodles and tofu. (Google “lunch box ramen” for really great ideas for that one. My kids LOVE it for lunch.) Make things in big batches and portion out, refrigerate, or freeze. Pre-make some mini meatballs that you can add to a plate of pasta.

And don’t look down on the glory of frozen convenience foods: I still keep frozen veggie burgers (usually the ones with Indian-style spices/flavors), those pre-grilled chicken tenders, and a million bags of frozen vegetables on hand for “Kids’ Dinners.”  I’ll make you some spaghetti, sure, but I’m going to add quick protein and vegetables to it, SORRY.

Will she eat it all? Probably not! But you can pack it all back up in some Gladware and try again another night.

And eat with her whenever possible.

You can do this! And so can she, however much of a fuss she kicks up at first.