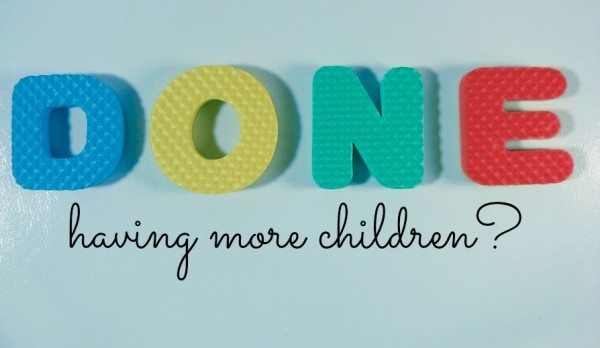 To Tubal Or Not To Tubal

I am almost halfway through my pregnancy with baby #4. My husband and I have always been on the same page, four kids are we are done. My husband is done done done. I feel the same, with a little less enthusiasm. We are both open to adoption or foster care in the future, so it makes the decision to do something permanent a little easier.

At my last OB appointment I discussed different options. I asked him what he would recommend, a tubal or a vasectomy. He said for a vaginal birth he recommends vasectomies and for C-sections a tubal. I will have a C-section. From everything I have read and talked about both options seem fine. I just keep picturing the end of my C-section with them handing me my baby and in the same minute I will also be permanently done with having kids. I’m afraid emotionally that will be hard. It would be silly to wait and have a tubal later. It is the easiest and most convenient option. My husband would be fine getting a vasectomy, it just seems like it would be much easier for me to get the tubal. I really don’t want to have to think about birth control again.

What do you think? Will it be too hard emotionally at the end? I don’t know anyone else who has been in this position that I can talk to. I have already had small moments of being sad that this is my last pregnancy (although very brief, because man I don’t enjoy being pregnant).

Any advice would be great.

Okay, so first of all, this is a very, very (veryveryvery) personal decision and situation, and what it is right for one person will be the exact opposite of right for another. But I think it’s a good thing for us all to talk about and share, and admit that there really isn’t anything “easy” about these sorts of decisions.

Personally, my experience is very colored by my mom’s. She was 36 when she had me (in the late 70s, when “older moms” were definitely not much of a “thing”), and she and my dad had SIX children between them from their previous marriages. She had a tubal the day I was born. She regretted it. A lot. Even though it technically made all the sense in the world — advanced maternal age! SEVEN children! on a high school teacher’s salary! etc.! — she and my dad ended up wishing they’d had just one more baby together. Ouch.

My OB/GYN also brought up this discussion during my pregnancy with Ike. Multiple times, actually. I was having a C-section so did I want a tubal? What about a tubal? He even asked one last time WHILE I WAS ON THE OPERATING TABLE. “Are we doing a tubal, you crazy baby-having person?”

My answer was always “no.” Like you, I just…I just couldn’t add that to my list of Things To Deal With While Newly Postpartum. I was probably just being a big chicken, but I was really, really scared of having it done and then immediately regretting it, and of not being able to look at Ike’s face without getting whalloped with the set-in-stone reminder that he would be My Last Baby Ever.

I told my OB/GYN that instead of permanent birth control, I would come in and get a copper IUD (Paraguard). That’s 10 years of not thinking about birth control (while also being hormone-free and safe for breastfeeding). But it’s also 10 years of knowing that I could change my mind at any time. 10 years would put me in my mid-40s, and I figured that by then, we’d either have decided to go nuts and have a fourth baby or actively decided against it, and Jason would get a vasectomy. (After three pregnancies and C-sections, I am all in favor of letting his parts bear the responsibility at that point.) I absolutely do not regret NOT getting the tubal when Ike was born. I am convinced it would have been the wrong call for me, at that exact moment.

And yet: the reality is that we are very probably likely done having children. Three children is…a lot, for us. It’s loud and complicated and draining and expensive and thoroughly, completely awesome. I am looking forward to the end of the baby/toddler phase. I am looking forward to life with three older children and trying not to freak out about the coming teenage years. I am giving away all our baby gear and clothing with wild abandon and dreaming of getting a tummy tuck. Maybe by now the tubal thing wouldn’t even faze me much at all.

(And yet: I still haven’t made that IUD appointment.)

Anyway, that’s MY story. It’s neurotic and probably not helpful, because your situation is yours and unique. Four children, possible plans to foster or adopt, a partner who is more emphatic on the DONE. Maybe an IUD would be a good compromise for you, rather than going straight to something permanent. And I don’t think there’s anything wrong with skipping the “convenience” of the C-section tubal if the decision isn’t sitting right with you for any reason or you’re worried about its impact on your postpartum emotions. (Which: Don’t mess with those bitches, no matter how many babies you’ve had. You know it’s always a slightly different set of loop-de-loops.) You’re having your fourth baby and that’s HUGE. There’s nothing irrational with putting a pin in another HUGE decision for a little bit, even if you’re just afraid of being a little tiny bit sad for awhile.

On the other hand, you might always be a little tiny bit sad, no matter when you make the decision. Totally normal. Maybe getting the tubal done at the birth might have the opposite effect — you’re too busy being in love with your newborn to give it much thought! You have a special bond with your youngest because you know to savor every single last “first” from the get-go! We’re done and it’s okay because LOOKIT THIS BABY.

Give it a little more thought and decide which scenario seems more likely for YOU, for YOUR unique situation. Don’t let yourself feel pressured for being “silly” or whatever. This is a decision that involves the heart (and let’s be honest, the HORMONES), and there’s nothing wrong with being a bit Scarlett O’Hara and saying “I’ll think about that tomorrow” instead.

(Just uh…be very careful and don’t rely on breastfeeding as birth control in the meantime.)