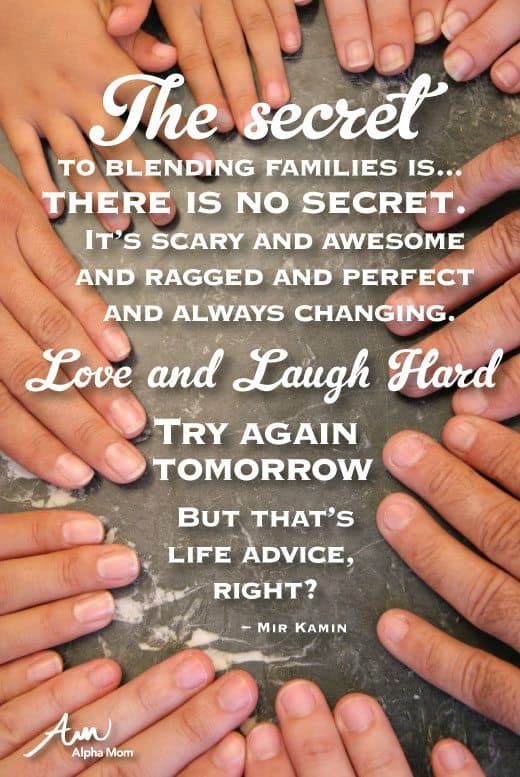 The Secret To Blending A Family

I feel like this one needs to start out with a disclaimer. A really lengthy disclaimer is needed; a “I am not a doctor or a therapist or even particularly good with people” sort of disclaimer, perhaps. Your mileage may vary! Caveat emptor!

With that said, you may have noticed that there are a million or so books out there to tell you how to blend a family harmoniously. This is unsurprising; recent statistics reveal that 40% of married couples with children in this country are stepfamilies. Math isn’t my strong suit, but given the rate of divorce in the U.S., and the number of single-parent households, I suspect that households in which parents are married and raising only the children they made or adopted together are now actually in the minority, or close to it. Chances are excellent that if you’re a parent, you are also a stepparent, or have a stepparent, or your spouse is a stepparent. And I don’t know if you know this, but stepparenting can be really hard and even more thankless than “regular” parenting.

When I started writing here at Alphamom, I asked folks to let me know what they wanted to hear about, and the immediate answer from multiple readers was “please talk about blending a family.” My out-loud response was, “Sure, I’d be happy to!” My only-inside-my-head response was, “Oh dear God, why does anyone think I have any idea how to do that?”

History of our blended family

I got divorced from my children’s father when they were 3 and 5. I read all of the books about co-parenting and dating and how to Do Things Right, and in general I think there are Rules Everyone Has Heard which make a lot of sense: 1) Never badmouth your kids’ parent. 2) Handle differences in discipline with a simple, “Well, in this house…” and without commentary on why the other way is wrong. 3) Dating with young kids is a special kind of torture designed to make you feel as unappealing and baggage-ridden as possible, but of course you don’t go introducing the kids and your paramour unless you think he’s going to be sticking around. It all made sense.

Four years after the divorce, I remarried. My now-husband is an old friend from college, which was very lucky, because “meeting new people” post-divorce really made me want to join a convent, plus there was no awkward, “Hey, kids, this is… ummm… my friend…” because they already knew him. Phew! Eventually, of course, we told them we were dating, and then he asked them for their permission before he proposed to me. We had a small wedding with the kids standing up with us as Girl Of Honor and Best Boy. My husband had never been married before, nor did he have kids, so all of the “blending” was between him and my children. I assumed this would go pretty smoothly because, hey, it’s not like we’re integrating kids on both sides. Plus, you know, I had read books.

Haaaaaaaahahahahaha. Go ahead, you can laugh at me. I deserve it.

Our situation was complicated by the fact that the kids and I moved 1,000 miles away from their dad shortly after the wedding, due to my husband’s job. This was (and still is) hard on their biological father, and although it’s not ideal and there’s a lot I could say about that aspect of our story, let’s just agree that that part is not entirely mine to tell. Fortunately the kids’ dad has the means and the motivation to stay involved in their lives despite the distance.

What to expect when you blend a family

But back to our new, blended family. We read! We got advice from people! Some of the advice was universal: Let the parent take the lead, with stepparent playing a supportive but non-disciplinary role, at first. Go slow. Don’t expect instant harmony, and don’t put pressure on the kids to accept the new status quo right away. True to their individual forms, my son launched himself onto my new husband with a bear-hug tackle to proclaim his love approximately 3.4 seconds after we were pronounced married, whereas my daughter—older, less demonstrative, and more guarded in general—waited a few months before the first time she fixed my husband with a defiant glare and a “you’re not the boss of me.”

My kids had to deal with a lot of change. They moved, came to a very different climate (both weather-wise and people-wise), switched schools, and suddenly had a second parent in-house. And my poor husband gave up the role of lifelong bachelor to embrace his new insta-family, which happened to include two very chatty, high-needs kids and their neurotic mother. Lucky him!

We did what the books suggested. He hung back for the first year, maybe even longer. I gave my daughter a copy of Help! A Girl’s Guide To Divorce And Stepfamilies and encouraged her to come talk to me about whatever she needed. We adults secretly celebrated it as a breakthrough on the day she brought the book down to the kitchen table to mock it during dinner.

He was just sitting there. Also? His name isn’t Doug. We all cracked up.

She then showed us a sidebar illustration of a cartoon girl with her hands out in a “stop” gesture where the perspective was such that the hands were the largest part of the drawing. I don’t remember the specific text, but for several years the universal diffuser of tension during family discussions became, “Stop! I have really big hands!”

Do I know how to successfully blend a family, six years into it?

I have no idea. We’re all still here, still married, and no one has gone to jail. My husband can (and does) discipline the kids, now, and I’m pretty sure no one has ever screeched, “You’re not my father! You don’t get to tell me what to do!” There’s a lot of love in our house. There has also been a lot of baptism by fire and more than our fair share of crisis and heartbreak and illness, I think, plus both kids are now teens (which is its own kind of crisis and heartbreak and illness).

The secret to blending families is…

…there is no secret. It’s scary and awesome and ragged and perfect and always changing. Love and laugh hard. Try again tomorrow. But that’s not blended family advice, that’s life advice, right? The one thing my husband started doing very early on which I do recommend to others is that he will tell a mouthy child, “Don’t talk to my wife that way, that’s disrespectful and it’s not okay in this house.” They’re good kids, but they’d never heard someone stand up for their mom like that, before. It makes an impression (in the best possible way). We do things as a family. My husband and I do things as a couple (not as often as I wish we could), too, because I think it’s important for us and also important for the kids to see. And he refers to them as “our kids” but always maintains a respectful boundary, reminding them that he would never try to (or want to) replace their dad.

It’s a work in progress, always. Isn’t every family?