Twitter Facebook Pin It Email Article
Prev One Room, Two Bedtimes: Update & What Worked! Next How to Keep Your Kids From Killing Each Other 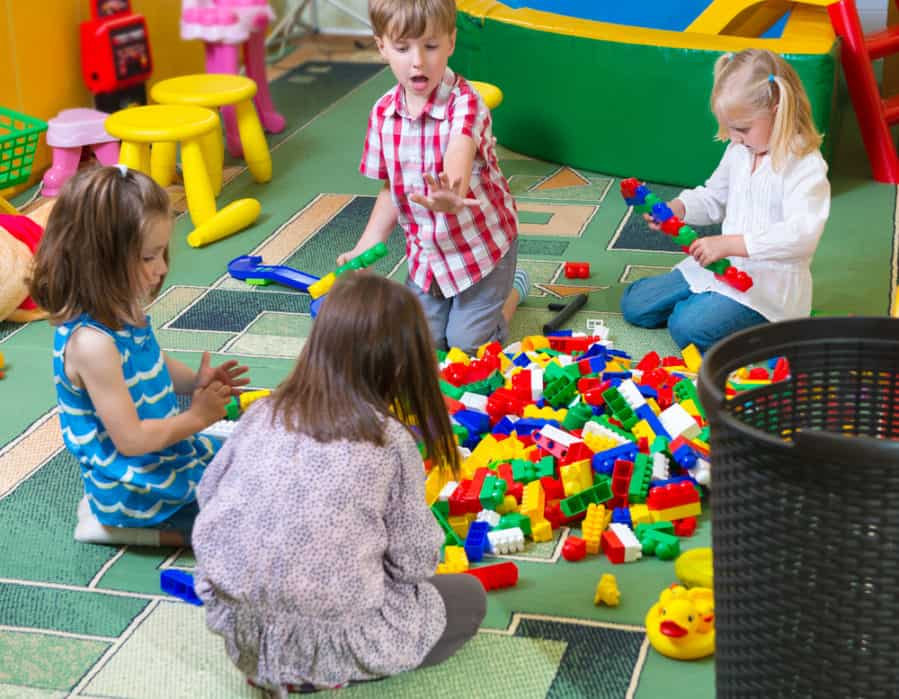 I am writing regarding a just-turned 4 year old who has been acting up at preschool. This is his third year at the center along with two full summer camps.

This all began from day one with his new room and teachers.

He will occasionally throw things at other children randomly and has thrown food at lunch. When sitting for a story, he will push his foot into the child in from of him or touch someone sitting next to him. When outside, he will not play broom ball or sport activities without having a problem. We forgot to bring his bunny to school for nap time, and he was restless and moving around.

The teachers are writing negative things everyday to send home. Where can we start? We talk about being good on the way to school and after receiving notes from school.

Any suggestions would help.
S

So while his behavior clearly isn’t IDEAL, it really does sound like it falls squarely in the realm of Not Hugely Unusual. Both due to his age — just-turned-four is still REALLY close to three, and three is The Worst, Just The Absolute Worst — and due to the whole room and teacher change. It doesn’t sound like he’s adjusting very well to this particular room and teacher dynamic, which is frustrating but certainly not unheard of.

And you know what? I might not totally blame him, because what I really don’t like in your letter ISN’T your descriptions of your son’s behavior. It’s the apparent lack of solutions, suggestions and support from the school and the teachers themselves. They should be your front line and top source of suggestions, not some advice columnist on the internet. (But please, continue to send me all your questions! I drink them up and savor them like wine on a playdate.)

I’m guessing school policy requires them to send home “negative” behavior reports regarding issues like throwing toys and food or kicking another child, but…what are they doing IN THAT MOMENT to correct or redirect him? I mean, you can talk and talk and plead and plead with him all you want at home and in the car on the way to school, but once he’s through those doors, your power to influence his behavior and help him cope with frustration/anger/hunger/boredom is pretty much nil.

Essentially, a young four-year-old child who is in the midst of a frustration-fueled meltdown over broom ball is almost wholly incapable of stopping in that moment and thinking, “Oh, but I promised Mother I’d be good in the car three hours ago! I shall take a deep breath and demonstrate good sportsmanship instead! For Mother!”

So you forgot his nap bunny one day and he didn’t take a nap. It happens! He’s four! And you’re a human with a human brain. Loveys and lunchboxes and spare changes of underpants get forgotten at home all the time. I’m really hoping that day’s report wasn’t among the “negative” ones…but because you felt compelled to mention it, maybe it was.  Of course, the teachers can say, matter-of-factly, “Young Hercules couldn’t nap without his bunny, please remember it tomorrow, thanks!!” But if they framed the oversight (and your son’s understandable restlessness and nap resistance) as some kind of Serious Behavior Problem…no.

A well-run preschool classroom has a plan for kids who have trouble napping — they can help the teachers prepare the afternoon craft or snack, or do a super-quiet activity (like a puzzle) out in the hall but still in the eye line of an adult. If there’s a super strict expectation that everybody MUST stay on their mat, napping or not, then it’s still ON THEM to figure out how to make that happen. Give him some books. Sit next to him and rub his back. Make a deal that he can do get a drink of water or pick out another soft toy from the classroom in exchange for lying down for the rest of quiet time. If they aren’t at least trying these things, yet expecting Total Authority Figure Obedience from a room of four-year-olds, well. That’s telling, and puts all those other “negative” things they’re sending home to you in a suspect light.

But maybe I’m assuming too much here! Maybe all the school reports are down-to-earth and matter-of-fact, but are still stressing you out and giving you OMG I’m-the-Bad-Mom-with-the-Bad-Kid vibes. The fact remains that correcting these behaviors and figuring out why he’s having issues adjusting this year (and only this year, and only this room) needs to be a collaborative team effort between you and the school.

How close are the children expected to sit together at storytime? Could he be given an assigned or preferential spot up close to the teacher, but also on a corner so he doesn’t feel so closed in? (Or tempted to bother multiple peers, if he’s only sitting next to one?) Is a chair an option instead of the floor? Could he carry a small fidget toy to keep his hands busy? Some kids this age can have real and honest sensory issues with the classic “everybody squish together on the circles on the carpet”  setup — maybe the carpet is scratchy or his back hurts or he’s just too close to everybody and is using his hands and feet to attempt to make a little more room.

Find out what happens in the moment when he touches another peer during storytime. Gently reminded and/or redirected by an aide? Moved to a new spot? Or is he scolded in front of the whole class? Which would again suggest these particular teachers have a Total Authority Figure Obedience teaching style that just might not be right for your son! He’s only four, but a good teacher still understands that you can’t just demand respect and compliance from small children without demonstrating some mutual respect and understanding of their little brains and big feelings.

The same goes for…pretty much all of it. The throwing toys and food and issues at recess. The next time you get a report full of negative things he did that day, ask immediately to talk through the day with the people who were there, and in an actual position to correct and redirect and to see what kind of strategies your son might actually respond to.  Maybe they have a one-size-fits-all approach to discipline and negative-attention seeking behaviors and you need to push them to I dunno, try something…else? Literally anything else?

(I just looked and Amazon currently sells 754 different books on the topic of “Four Year Old Behavior.” Believe me, no one has figured out the one magical solution that works for all of the four-year-olds, all of the time.)

If the teachers seem willing to work with you and brainstorm some strategies, great! Maybe they could have a quick conference with his former teachers and get a sense of what worked for them and/or what else has changed for him this year. Maybe he’s acting out because this class is bigger and he’s not getting enough positive, one-on-one attention. Maybe his own behavior chart/incentive system/visual schedule would help. Maybe he’s having a regular conflict with a specific peer. Maybe (after three years and two summer camps) not ENOUGH has changed for him and he’s…kinda bored with this center and the same daily structure, routine, recess games, etc. (I’d mark that one down as unlikely, since preschoolers IN GENERAL crave familiar structure and routine, but there’s always an outlier! You can write book #755 about him, then.)

But on the flip side, if the teachers seem unwilling to budge on their classroom-discipline approach or seem to expect that their responsibility ends with the problematic behavior reports…and that it’s entirely “on you/your job” to figure this out and solve the problem…from home…somehow…where you don’t see any of the same behavior…so? Yuck. I would definitely start looking for a new preschool setting and summer camp option for him. It sucks when a program you’ve been with long-term suddenly lets you down (and I’m assuming kindergarten is on your mind for next year), but don’t feel like you can’t make a last-minute change if you need to. If HE needs you to.

More on child behavior at preschool at Alpha Mom: