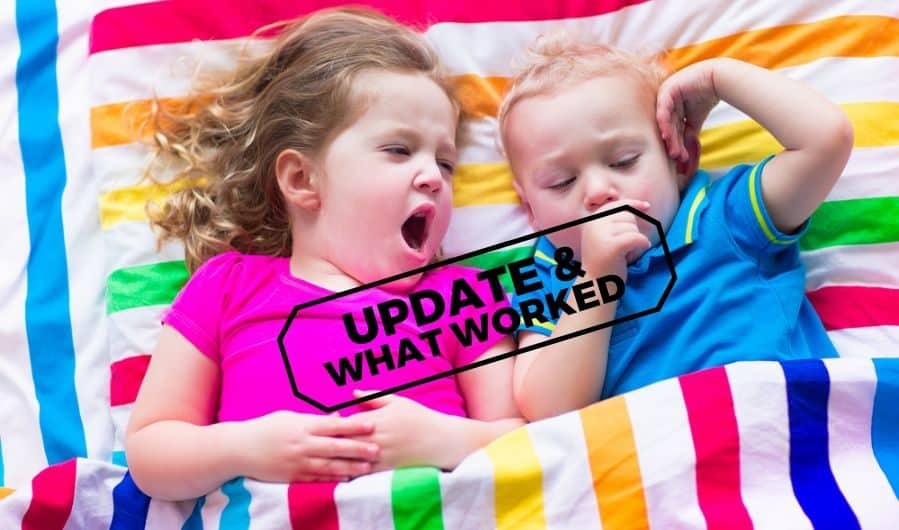 Remember the family that had two small children sharing a room, but operating on wildly different sleep schedules? And oh, had a brand-new baby on the way and really, really needed to get things settled sleep-wise ASAP? Here’s the update…

You were ABSOLUTELY RIGHT about needing to nip that shit in the bud, so thanks for the verbal kick!

1) We followed your advice about the wake-up clock and it has helped mornings SO MUCH – he now stays in bed until the star turns into a sun. The visual cue is so helpful!! That mostly fixed mornings.

2) We didn’t want to move my son back out of his room, since we wanted a routine (and every time he accepts a routine and we shift one part of it, he tests every boundary on the slightly-altered routine – a different bedroom would basically postpone the theatrics until the next time we tried putting him in his room). However, one of the commenters said something about shifting my daughter into our room (brilliant, and why didn’t I think of that in my sleep-deprived haze…)… and so: she got enough sleep, we could crack down on the ‘this is the routine, DEAL WITH IT’, he settled into it, and then we shifted her back.

3) We now get my daughter ready for bed before my son and that way she ‘gets to’ read extra books. They go to sleep at the same time, and he has learned to stay in bed, so everyone is getting more sleep and acting out less. FANTASTIC.

4) The baby was born during this entire debacle (of course) and so far is healthy (barring the heart issue – we’re waiting for surgery, and I’m anxious as hell, but he’s doing ok so far).

Thanks for the advice! between you and the commenters, we cobbled it together and it worked!

Hooray! We did it, Internet. Are the Wonder Pets still a thing? Are any other parents still incapable of saying the word “teamwork” without reflexively singing WHAT’S GONNA WORK?

I’m not sure why it didn’t occur to ME to suggest moving your daughter vs. your son — I think I got overly focused on her But It’s Not Faaaaaaair response to her earlier bedtime and assumed changing anything else up for her would also trigger the “THIS IS AN INJUSTICE” reaction. But I’m so glad that worked, along with the wake-up clock.

(Here’s some irony: I bought that clock for my oldest son, who was indulging in similar super-early-morning shenanigans as your son and at a similar age. It worked great! It kept him in bed, in his room, until a reasonable hour. He went on to use it as a regular ol’ alarm clock for many years. And then he turned into a teenager who now requires three separate alarms going off at top volume in order to wake up in the morning. Including one that called the “Sonic Bomb” that shakes his mattress while beeping so loudly it wakes me up from the other side of the house.)

(Guess who it doesn’t wake up? ANY OF MY CHILDREN.)

Anyway, I wish you continued good nights of sleep and for a quick and optimal outcome for your new baby.

More on Bedroom-Sharing From Alpha Mom: