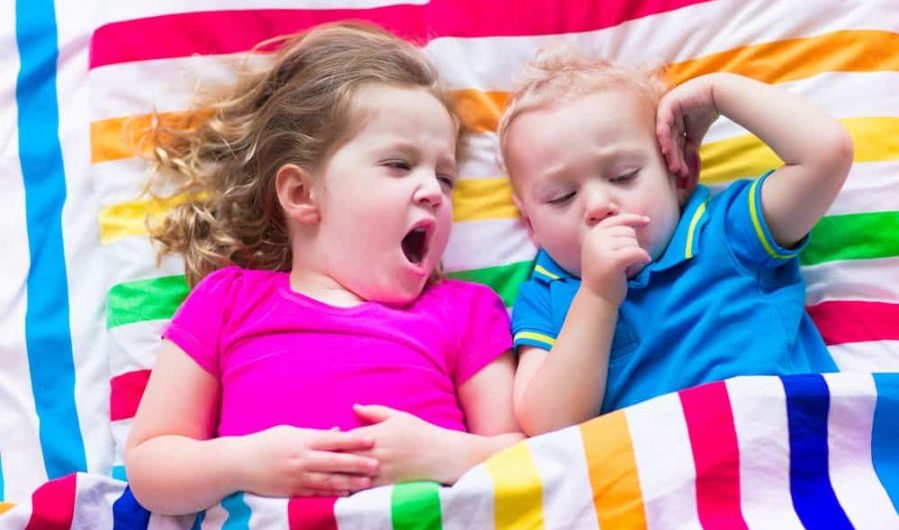 We are in a bit of a sleep-deprived bind.

In short: we’re expecting a 3rd child in 4 weeks. This child is set to be medically complicated (congenital heart issue requiring surgery, please god help my nerves and make this go ok). In practice, at the moment, that means I’m waking up 4-6 times a night to go to the bathroom, and my husband is handling all the night issues and most early mornings because I’m so exhausted (he was literally grey-tinged from exhaustion this morning. This promises well, with the new baby…)

Our 2 older children (2.5-year-old boy, 5.5-year-old girl) are currently sharing a bedroom, and LOVE IT – they get along really well and it works out, overall. However, their sleep needs aren’t in sync, and the start of school is highlighting this.

My daughter is meltdown-level exhausted by 7:15 every night; my son (who naps from 1-2:30 or so, and absolutely needs it – and it’s daycare-time, so we have limited influence on that) CAN go to sleep at that time, but really 8pm is better for him. Typically, that means that we put my daughter to bed and then take my son to our room or the living room for books until it’s around the time when he goes to bed. AND THEN. In the morning, he’s up… at 5:30, creeping to 5am, creeping to 4:30… If he stays in his room, he wakes his sister, who needs the sleep (desperately). If he comes to our room, he wakes US up, and we’re already tired and expecting a new baby and would very much like more sleep. And if he doesn’t go back to sleep until at least 5:30, he’s an absolute wreck by 11am, and the entire cycle repeats with exhausted child and crappy sleep with lots of wake-ups (not ideal). Same if we shorten or skip naps on weekends – we get a tired hobgoblin who won’t go to sleep and has 6 nightmares during the night, it isn’t an improvement.

So… do you have a magic trick for convincing a very bouncy and excited and AWAKE 2.5-year-old to freakin STAY IN BED and SHUSH until 5:30? (Note: he’s no longer in a crib, since he learned to fling himself out of it head-first, so he can get out easily). Or to get him the quantity of sleep he needs so he doesn’t turn into an overexhausted hobgoblin by 11am, exhausting the rest of the house in the process?

2nd question: my daughter is NOT PLEASED at going to bed before her brother, until we actually get to the point where she’s sobbing from exhaustion and passes out (… 7pm-7:15pm, which at least means she passes out when we can get her in bed). We can’t logistically put her in bed earlier, if she’s less exhausted she keeps herself awake (literally: pinches herself to stay awake via sheer stubbornness), and she can’t sleep in on weekdays and keeps herself awake through any attempted naps. I can give her the opportunity to sleep and explain why she needs it and should, but… any suggestions for what to tell her to smooth over the ‘yes, he’s littler, but he napped this afternoon and you didn’t so you need sleep more than he does right now’ injustice? Because I GET her wanting to stay up, but she physically needs the sleep, and she needs to get it without messing with her brother’s sleep any more than it is already a mess, and I’m at my wits end.

We’re all in need of sleep. And it’s gonna get worse before it gets better, so any improvement you can help with would be so appreciated!!!

So y’all know I’m a hugggggge fan of sibling room-sharing. To a point. It’s so wonderful to have your children happily bonding and learning co-exist in a shared space and all that, but I’d be straight-up lying if I didn’t include “BETTER SLEEP FOR MEEEEEEE” in our personal reasons for bunking our boys together. Because they did sleep better together, for many years, until they didn’t.

Once it was clear that their sleep needs and environment preferences were out of sync (one child would insist on turning every light and lamp on, the other needed complete darkness, they’d squabble over their bedtime music/storytime playlist, and generally stay up later and later to play/read/bother each other, etc.)…we split them up this past summer. Now when I send them to bed, they actually…go to bed and fall asleep, with zero shenanigans and/or stuffed animal fights.

So you guys will soon be in full sleep survival mode with the stress of a new baby. Scratch that, you’re already there, what with pregnancy-related sleep interruptions and two small children wreaking havoc on everything else. Now is the time to maximize every possible hour you can get. Nay, minute!

Are separate rooms at all an option right now? Even just temporarily? So your son can have his own space to wake up and play quietly in?  And where he can spend the 30-45-minute bedtime disparity window also playing quietly? (Note that I wouldn’t move anything but his bed and a selection of books and/or other quiet activities, like paper and crayons.) (WASHABLE crayons.) Because yeah, going to bed earlier than a younger sibling — and knowing said younger sibling is getting extra quality time with Mom and Dad — is definitely going to trigger the “THIS IS AN INJUSTICE!!” response from a 5.5 year old, full stop. And there’s only so much reasoning you can do at that age (as you’re seeing, live and in person). And since your son IS waking up way, way too early and prone to overtired hobgoblin behavior himself, I don’t think sending him to bed at the same time as his sister is a terrible ask. Even if it’s just “brush your teeth and put on pajamas” and you know he’s not going to actually settle down and SLEEP for another 45 minutes, that buys you time to get your daughter settled down to sleep without the injustice theatrics. Once she’s zonked out in bed, you can then move on and get him properly to bed.

And again, this separation doesn’t necessary mean a full room makeover and permanent change. Just a mattress, a milk crate of quiet books/activities and maybe one of those color-changing Okay To Wake clocks to remind him to stay put until 5:30. If you’ve set up a nursery for the few baby, recognize that it’ll probably be at LEAST a new months until he or she will actually need it or consistently sleep there. Plan on the baby sleeping in your room (that’s how to maximize sleep with a newborn anyway, and a safer choice for a medically complex newborn) and let your son have the real estate. Maybe that afternoon nap will go away in the meantime and you’ll be able to get them both on the same bedtime schedule by the time the baby is actually ready to sleep alone in the crib. Or put your son in a den or home office or hell, clear out space in a walk-in closet. (There ain’t nothing wrong with a mattress on the floor of a closet. Kids LOVE a mattress on the floor of a closet. It’s like a cozy little fort! And parents love sleep, so everybody wins.)

So do whatever it takes to 1) create the illusion that he’s going to “bed” at the same time as his sister so it doesn’t feel so unfair and worth pinching herself away over, oh my god child be reasonable here, and 2) have a space of his own in the morning to lessen the impact of his super-early wakings on everybody else.

(Definitely recommend the Okay to Wake clock, but expect that it’ll probably take a few mornings before he starts to respect it. If he comes into your room, silently lead him back to bed. Point to the clock. Shake your head, put your finger to your lips, exit and shut the door. Repeat as needed. When the clock tells him it’s okay to get up, greet him with all the smiles and enthusiasm your poor exhausted self can muster.)

If there is hands-down, absolutely no other space for him to have, even temporarily — well, that’s obviously more difficult. I’d probably tell him he has to go to bed at the same time as his sister, just for simplicity/sanity’s sake. (I mean, it does sound like he could use more sleep, even with the nap.) And then to avoid him waking her up in the morning, you could put a small air mattress in your room or a hallway –basically a little in-between “zone” he’s allowed to move to and quietly look at books and maybe doze back off. Not ideal, but better than everybody being miserable in the morning.

Hopefully, this all will be temporary and you can get them back to sharing a proper room again at some point in the future, whenever their sleep needs and schedules aren’t so at odds with each other. Probably once he drops the nap, you’ll be able to align their bedtimes again. And even if he remains a super-early riser, there will come a glorious day when you’ll be able to safely trust him to quietly head to the kitchen to pour a bowl of cereal and peel a banana or whatever by himself while the rest of the family squeezes in another hour of sleep.

Unfortunately, that day is not today. So do whatever you need to do, even if it’s not quite what you want to be doing in the long run. I wish you much sleep and that everything goes just perfectly with your new little bundle.

HERE’S THE UPDATE FROM THE MOM ON WHAT WORKED AND HELPED HER FAMILY (please read the reader comment section below first though as it is relevant).

More on Bedroom-Sharing from Alpha Mom: