I’m sharing five of my favorite mass-produced costume ideas here because I”m assuming you will also wind up at the Halloween super store at some point and maybe you can buy something similar for your little person. If you do, please think fondly of me as I spend all my money on a last-minute Licensed Character costume for my son. 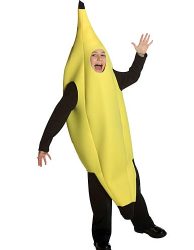 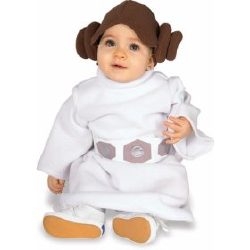 Star Wars characters: I was a huge fan of sibling costumes before my kids developed “free will” and “opinions.” I have friends who dressed their son as Luke Skywalker and their toddler daughter as Princess Leia. Even better: They got the dog a Yoda costume. Of course, if they’d really wanted to do it right my friend’s husband should have dressed as Darth Vader, but whatever. Still cute. 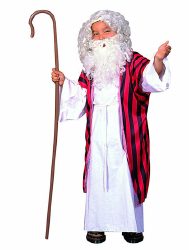 Moses: Okay fine you don’t want to be a banana, how about Moses? The plagues are scary! Frogs everywhere! What little kid doesn’t dream of dressing up as Moses for Halloween? Apparently mine doesn’t. (Side note: Some religious schools ask that students dress as saints or “non-scary” characters for Halloween. If that’s you, Moses is perfect.) 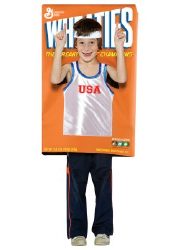 Wheaties box: Do you remember the Wheaties box with Mary Lou Retton on it? I was so impressed by that — I remember thinking for a moment how I’d like to succeed as an athlete enough to be on a Wheaties box. But then I also remembered that I don’t like sweating very much which seems to be an important part of being a successful athlete. I may have to get the adult version of this costume, though, and live out my Olympic dreams. Hilarious. 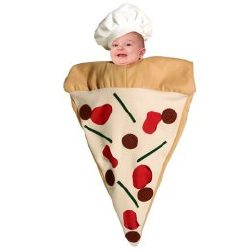 Slice of pizza: I love this toasty warm pizza bunting costume. I wonder if it’s warm enough for your baby to wear all winter? Just imagine unloading the baby at daycare in January in his pizza outfit. Hilarious.

Looking to Make Your Own Costume This Year? Check These Out: