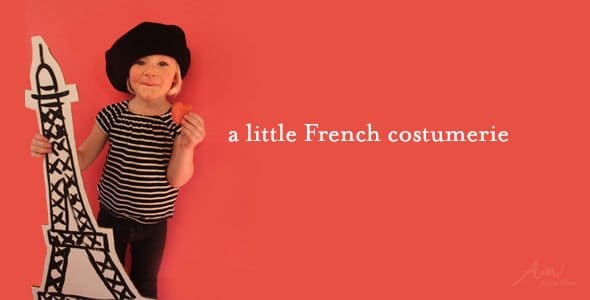 I’ve had Paris on the brain since I visited the beautiful city way back in 2005. In fact, I’ve recently written a children’s book called Secret Agent Josephine in Paris that will be officially released on November 8th, so when it came time to think up some costumes for this Halloween, my mind went to all things French.  Bien sûr!

Cute, no? (said with strongest French accent I can fake) Here is how we made them! 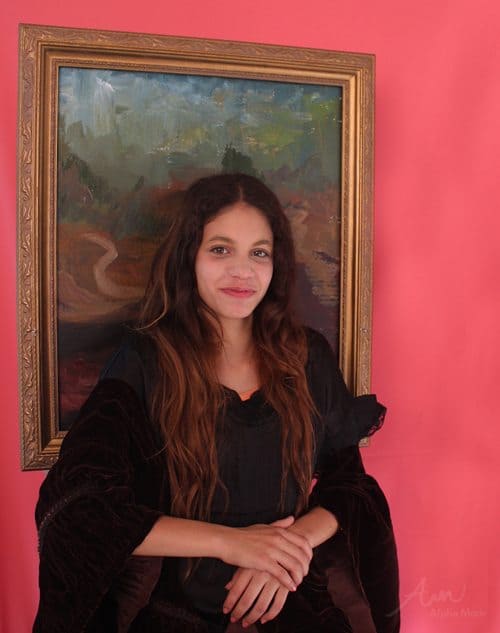 Creating Leonardo da Vinci’s famous painting, the Mona Lisa, was especially fun. I’d seen a lot of versions of this costume with children’s faces peeking through the canvas but I thought it would be more fun if her frame was free. I was thinking of attaching some straps to the edges of the frame (by drilling an eye-hook into the frame and attaching ribbon) and making it wearable like a backpack, but in the end that was uncomfortable. So we just let Mona live outside her frame, which I think is actually really cool, like she came to life and stepped right out of a painting! We used a really cheap, light (plastic actually) thrift store frame that would be super easy to cart along trick-or-treating. 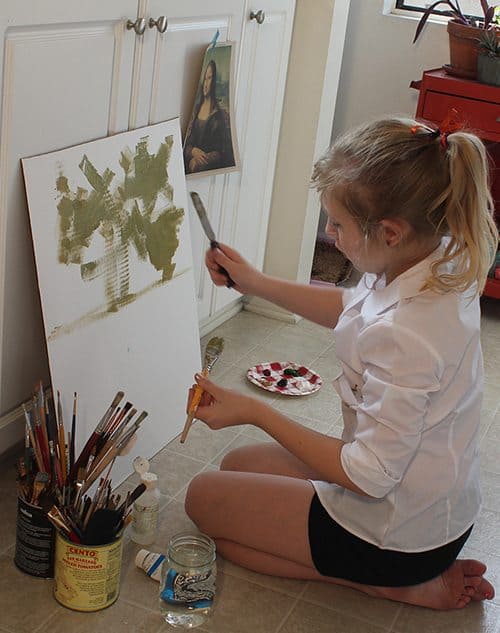 To create the background we made a VERY rough impression of what we thought Da Vinci’s painting looked like, trying to match the colors and the fuzziness of the background. This fuzzy background technique was revolutionary during his time, because before Da Vinci, painters painted detail in the background just as crisp as in the foreground. (This painting technique is called sfumato which comes from the Italian word that means “to tone down” or “to evaporate like smoke”.) 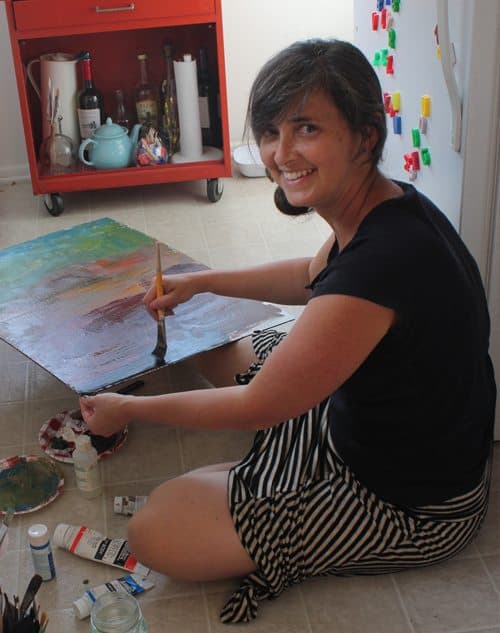 Hey! There’s me, painting on my kitchen floor because it’s easy to clean up!

To create Mona Lisa’s look we parted her hair in the middle and put some cover-up makeup over her eyebrows to downplay them. Her  outfit is a round necked blouse that we found in a thrift store. For her shawl I cut up a velvet skirt that I also bought for four bucks at a thrift store, but really, any draped fabric would work. 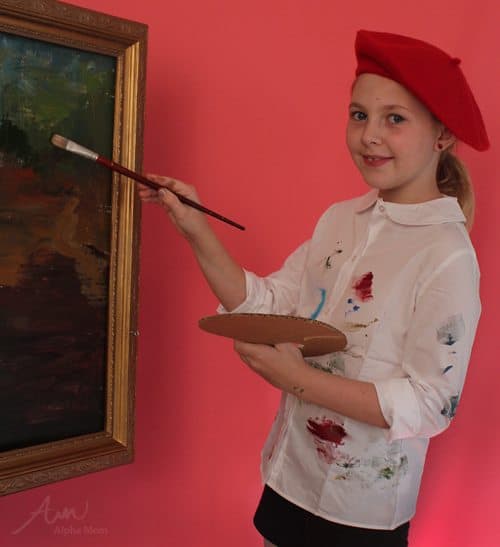 This one is so easy.  White blouse, a few smudges of paint, a beret and you’re good to go!  We added a palette made out of cardboard and a paintbrush, but a sketchbook and a pencil behind your ear would work too. 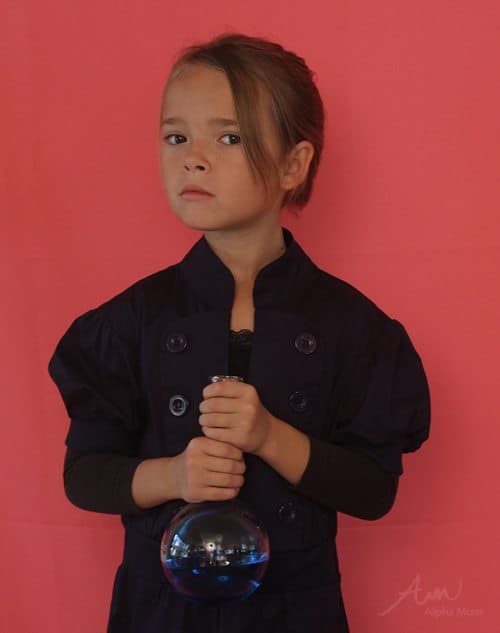 With this look, I was trying to recreate a photo I saw online.  I did buy a lab coat online that would have communicated the scientist look, but I kind of fell in love with 1800’s Marie so we went with a dark blue thrift store dress instead. Add a round-bottomed boiling flask (or a plastic vase if you don’t want your kid carrying around something that might break or spill) and you’re ready to discover radium! 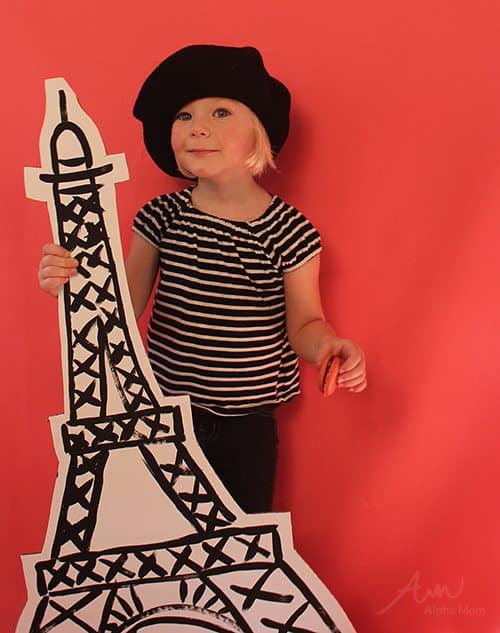 And last but not least our little French Girl!  She was an after thought but too cute not to include in this post. A little French girl costume is pretty much a no-brainer. Any combination of stripes and basic black pants with a beret will work. Of course we had to throw in an Eiffel Tower because I am the cardboard whisperer, after all. A macaron is optional. 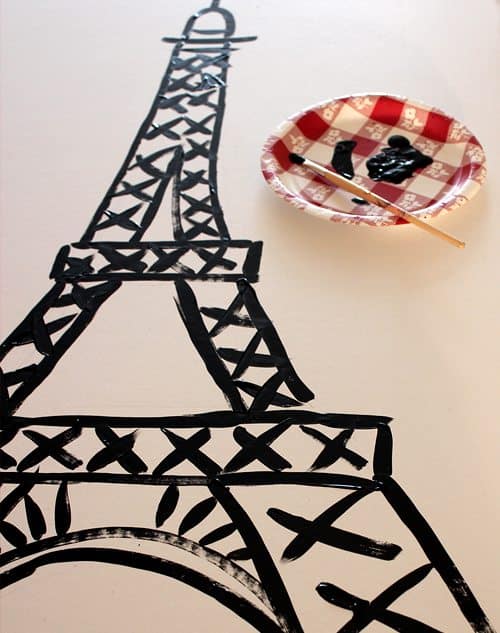 The Eiffel Tower is tricky to draw, mostly because everyone draws it from the perspective of looking up at it.  Mine is a little wonky too, but the good news is that it’s such an iconic structure just about any rendering will do the trick. I painted mine on a sheet of white cardboard (normal cardboard or some poster board would have worked well too) and then I cut it out with a trusty box cutter. (Remember box cutters are NOT for kids. There’re not even for some adults. If you feel a little unsure around sharp blades use a pair of heavy-duty scissors.) 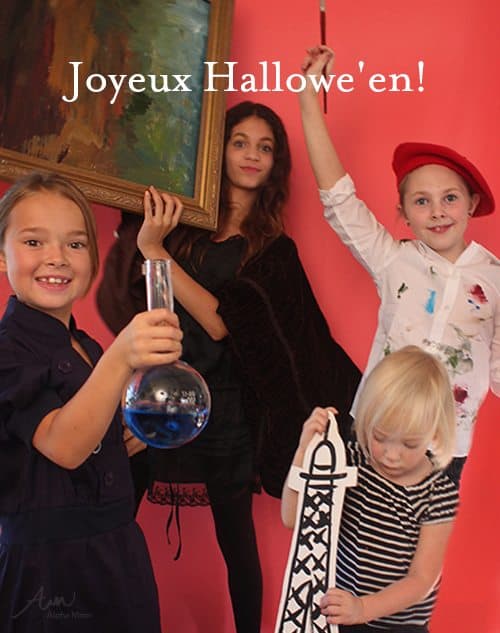 I hope you enjoyed our little French Halloween Costumerie!

p.s. I don’t actually speak French. I apologize to those who do. Please feel free to point out my bumbling American errors. 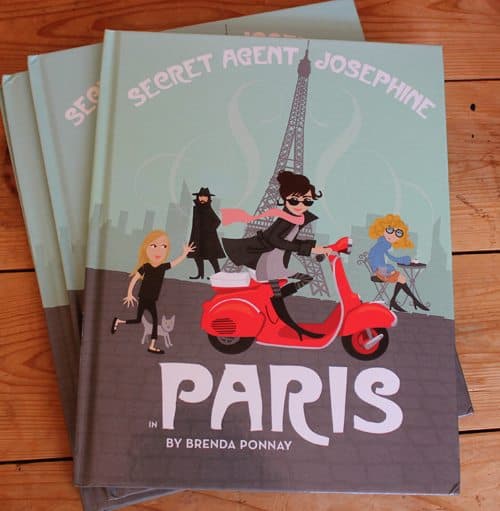 Don’t forget my children’s book  Secret Agent Josephine in Paris. Thank you in advance for all of your support!