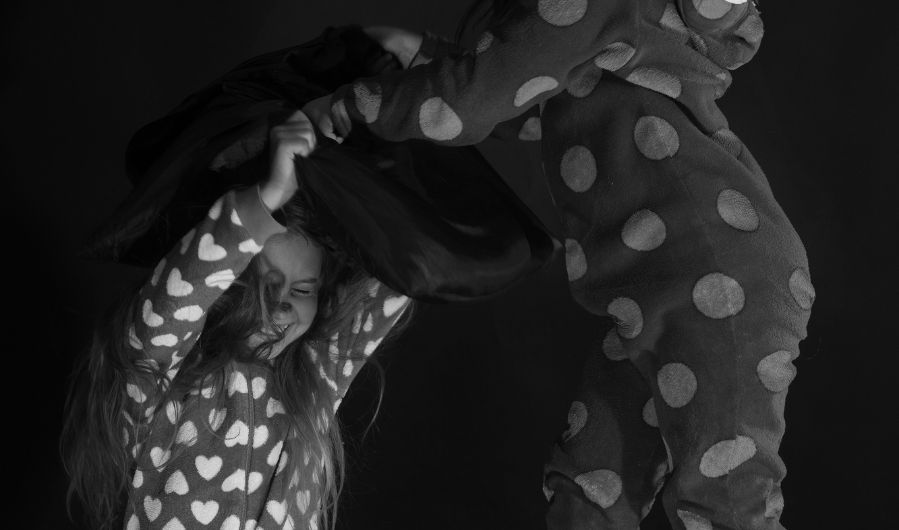 Oh wise oracle of the internet please tell me how I can get my children to go to sleep. They are nearly 5 and 3 and on the whole they’re relatively well behaved and decent sleepers. That was until three months ago when we started telling them we had bought a new house and were moving. Since then they have fought bedtime every step of the way and routinely go to sleep at 10:30pm and never before 9. We’ve been in our new house for nearly a month now and there is no indication anything is changing.

We’ve tried talking about their feelings, staying with them (they just try and play with us or keep playing when we fall asleep), we’ve split them up in different rooms, we threaten to take away their toys from the room (there is a battle of wills that can result in a good 15 min screaming session), paying them to go to sleep (they get paid for small chores) and ignoring them (they run around the house). The only thing we haven’t done is strapped them to the bed or locked the rooms as we feel this would be cruel and medication. Nothing has worked even for a single night and after the fourth or fifth we give up and try something different.

They still go to the same school and have the same friends. They really enjoy our new house and spend most of the time playing in the garden. They are shattered by dinner time as we need to get them up at 7:30 for preschool. In the morning they cling to the covers saying they are too tired. We seem to have gotten ourselves in an overtired loop with the original instigation fading away but my 5 year old saying he’s too tired to go to sleep.

Is there anything I can do or do I just need to accept that they’ve prematurely turned into teenagers? This is starting to affect my relationship with my husband as evenings are really the only times we can really be intimate is when the kids go to sleep. I feel like we’re turning into co-workers!

Signed
Wondering if she can send them back

Say it with me: THIS TOO SHALL PASS.

My youngest was four when we moved, and his sleep (naps and bedtime) went absolutely bonkers sideways/upside down for months. He refused to sleep in his new room. He refused to sleep alone. He’d sneak into his brothers’ rooms — sometimes to try to sleep in their beds, more often to make as much of a mess as possible before passing out on the floor. My Instagram feed at the time featured many, many photos of him zonked out in hallways, closets, on the stairs, the couch…anywhere but his actual bed, HASHTAGNOTTIRED.

I know reading the word “months” probably sent a cold, piercing chill down your spine, but the reality is that moving is really, really disruptive for small children. Yours likely just need more time. And you (the adults) need to pick one coping method and stick with it.

Expect regression of some sort

You can do everything “right” when it comes to moving (photo books, memory boxes, lots of talks about feelings, etc.), and the move itself can be full of positives (awesome new house! a  bigger yard! a swing set or pool or new friends next door!)…and still end up with a child who regresses in some way. Sleep is probably the most common one, but it’s also normal to see regressions in potty training or behavior in general. (Acting out at school, fighting/aggression towards siblings, etc.)

I remember reading (during my own post-move OMG WE BROKE THE BABY Google-hole) that kids this age don’t really have the best grasp on object permanence. This means it’s possible that your children are still viewing the new house more like a vacation rental or hotel. (Where bedtime rules tend to be more flexible, right?) It’s new and it’s fun but it’s not really forever or for good to them yet. It could also be that the new! and the fun! is still running super high for them and they’re simply struggling to dial down the excitement at night, despite being totally exhausted.

So, what can parents DO?

“Okay Amy, that all makes sense, but WHAT DO WE DOOOOOOO?”

If this advice column were to ever slap a slogan or mantra on t-shirts or tote bags, it would be: YOU CANNOT MAKE THEM EAT, SLEEP, OR POOP.

You really can’t! You can certainly set them up for success and provide the optimal environment and opportunity…but in the end, it is completely up to the child to actually consume the food in front of them, to close their eyes and sleep, and/or release their bowels on the dang toilet vs. in a pull-up behind the living room sofa.

I, personally, find this division of responsibility kind of freeing, as it reminds me to let go of whatever deep, crazy-making frustration I’m feeling at the time. Oh yes, look at who’s being a jackass at the dinner table again, insisting that they don’t like rice, have never liked rice, what a terrible thing you have done to me, Mother, by serving me rice.

This isn’t the greatest parallel, I know. A child won’t starve to death because he skipped a side dish at dinner. A child who isn’t sleeping, on the other hand, will struggle with more physical consequences. (As will his parents, who have to deal with his cranky, overtired self the next morning,)

Getting sleep schedules back on track

So here’s my recommendation:

1. Picture yourself three or six months from now. What is the bedtime routine you want your children to have, in terms of time and location? In bed by 7:30, 8 p.m.? Same room, different rooms?
2. Do that.
3. Say goodnight, close the door.
4. Stay outside the door. Have your husband join you.
5. Sit on the floor with a glass of wine and watch Netflix on a laptop with headphones together.
6. If they try to come out of their room (for reasons other than to use the bathroom), redirect them back to bed, say goodnight, and close the door again. Whatever else they do in their room is on them.
7. If you hear them playing or singing or whatever, turn up the volume on the laptop and ignore it.

They don’t have to sleep, but they absolutely, 100% have to stay in their room. Running around the house after bedtime is not allowed, not okay. Staying up reading books or amusing themselves quietly until they pass out from exhaustion is not ideal, but you know what? That’s out of your control, and outside your division of responsibility. YOU CANNOT MAKE THEM SLEEP.

In time, they will settle into this rule and routine. You won’t have to sit outside their door, but you might still need to stay somewhat aware of them and ready to escort someone back to their room every now and then.

Set-up the bedrooms as a sleeping environment

I would actually urge you to consider removing toys from their bedrooms — not as a punishment, though. We’ve always tried to keep our boys’ bedrooms set up as books-and-stuffed-animals-only zones. (And not all their stuffed animals. Just the Important Lovey/Comfort ones.) Do it while they’re at school (or distance-learning in another part of your home) one day or send them to Grandma’s one weekend (editor: this slice of advice is for normal non-shelter-in-place times). If your home allows for a dedicated playroom, perfect. If not, try to carve out a space for the toys somewhere else in the house that can be “their” special place, maybe with a kid-sized table and chairs for art or a special play rug or chalkboard wall. Make it awesome and a fun special surprise, basically, rather than a punishment or consequence for whatever went down the night before.

Removing toys and distractions IS part of “setting them up for success with the optimal environment.” (Leave books though! Books are fine! You don’t need to turn their rooms into a monastery.) You could also talk to your pediatrician about melatonin gummies, and — to maybe get them out of the overtired tailspin — start enforcing a mandatory “quiet time” in the mid- to late afternoon for a bit. Again, they don’t have to actually nap (but maybe they will, if given the opportunity!), but they can spend an hour decompressing in bed with some books or listening to some music.

As always, good luck and good sleep. It will happen, at some point, eventually. (Ugh!)