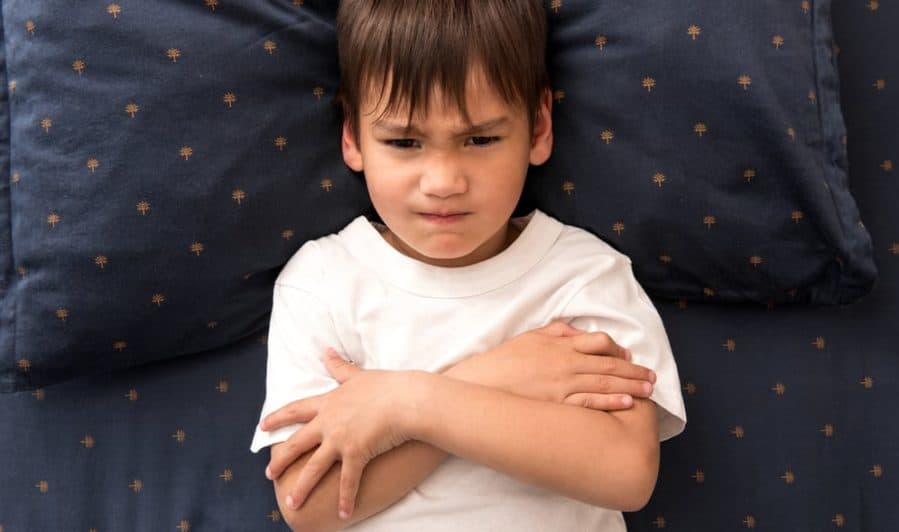 I have an almost 4-year-old son that won’t go to bed at night. Up until a couple of weeks ago, he would go to bed consistently every night with no trouble. We have a good bedtime routine in place that has always worked well for us. Then, suddenly, a few weeks ago, he started fighting it. The trouble doesn’t always happen at the same stage of the routine. Sometimes, he won’t brush his teeth. Sometimes, he won’t put on pajamas. Sometimes, he goes through the entire routine but then refuses to actually get in bed. When he gets up or otherwise breaks routine, the situation begins with whining and fussing, but when that doesn’t get him the results he wants (we have been ignoring him, or calmly telling him no depending on what he says), it quickly escalates into running around the house laughing like a hyena.

If we ignore him, he will do this indefinitely. If we take him back to bed, he will throw a tantrum and then eventually start the running part all over again. If we issue consequences, he ignores us or has a tantrum about the consequence. Nothing has worked. This can last anywhere from 1 to 4 hours. I am tired and fed up. To make matters worse, his bedtime tantrums are disturbing the sleep of his 2 year old brother, who goes to bed around the same time. They don’t share a room, but my eldest is loud enough to disturb him. Plus, he has taken to breaking into his brother’s room after I’ve put the youngest to bed in order to stir up even more trouble. The more nights in a row this has gone on, the more tired he is the next day. This leads to even lengthier, more difficult manic phases at bedtime the following night. We can’t break free of this vicious cycle and get things back to normal.

Ahh. an almost-4 year old! My favorite age. (NOT MY FAVORITE AGE.)

As you’ve probably Googled yourself, the “previously good sleeper now acts like a wild unhinged banshee at bedtime” is a common thing for this age. And you’ve probably read everybody’s helpful (NOT HELPFUL) suggestions about consistent bedtime routines (OH REALLY DO TELL ME MORE) and repeating the routine over and over until your child finally gives up (AHHHERLJHDFLDNKHWODHFE).

The truth is, sometimes these little humans we love so much manage to try our patience and test our nerves like no one else on earth for awhile, until they decide to…not, anymore.

Start by troubleshooting for big changes

But let’s step back and see if we can troubleshoot this with a bigger picture approach. Have there been any big changes to anything else in his life recently? Did he start preschool or experience a change in child care? Did you or your partner take a business trip or change YOUR daily routines in some way? Sometimes this behavior is part of a child’s adjustment period to non-sleep related changes in their life, and the problem will pass on its own in time. (Provided you stay consistent and don’t cave to stuff like letting him sleep in your bed, falling asleep in front of the TV, expecting a snack every night at 10 p.m., etc.)

Also, is he still napping during the day? Sleeping later in the morning than before? Is he consistently getting a couple hours of high-energy play (playgrounds, indoor gyms, etc.) Did he recently have or is he on the cusp of a growth spurt? Sometimes kids act like this and we revert back to the baby sleep thinking of “Oh, he must be overtired, let’s move bedtime earlier so sleep begets sleep and all that jazz.” But other times kids act like this because they really genuinely aren’t tired at bedtime. Yes, he’s obviously getting overtired at some point, but if he’s able to make up even some of the deficit the next morning or with an afternoon nap, that might be where he gets that manic rush of energy when bedtime rolls back around. The same can be true if he spent the whole day inside doing quiet activities instead of getting a chance to run run run and shriek shriek shriek in a more…acceptable time and setting.

Adjust your kid’s amount of sleep and physical activity

So try this: Don’t let him excessively sleep in in the mornings. Cut out any naps that still happen, or keep them super short. Plan something physically active where he can exert a decent chunk of energy. Watch for actual signs of sleepiness at bedtime. If you don’t see them (yawning, rubbing eyes, generally quieting down), let him stay up 30 minutes later than his little brother. After his brother is settled, spend that time one-on-one with him doing something fun but quiet. (Preferably non-screen related, too.) Reading books on the couch instead of his room, listening to his favorite music, etc. Set a timer or give him several verbal warnings about when it’ll be time to brush his teeth and put on pajamas.

If the antics still ensue, don’t give him any attention, but don’t just ignore him and let him run around the house. That is not acceptable. Take him back to his room (carry him if you have to) and tell him it’s time for bed. If he tantrums, let him tantrum, but inside his room. Stand outside his door (or sit! bring a glass of wine and a book!) to stop the escapes/brother’s room break-ins before they start. I’m not a fan of locking children’s doors for safety reasons, but I know some parents who have used baby gates for frequent toddler bed escapees. (Although at almost-4 he’s probably smart enough to figure out how to open one or climb over.) Let him know that FINE, he doesn’t have to sleep, but he DOES have to stay in his room after bedtime. He can read books or play quietly, but the screaming and the running is not okay.

You can also try positive reinforcement instead of negative consequences. If he stays in his room quietly (even if he’s awake for awhile), he gets…whatever motivates him the next morning. (Think potty training.) Maybe a cookie for breakfast, blueberry pancakes, some little toy from a dollar store prize box. Or make a chart and dangle a “big” reward for a solid week of good bedtime behavior.

Good luck! This truly is the age that tries mens’ and mothers’ souls.