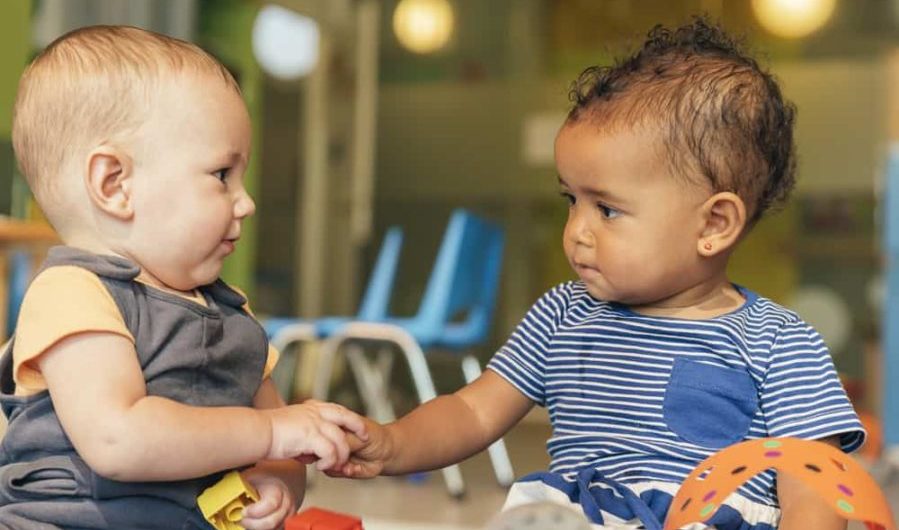 I have been following you and your family since I got pregnant with my daughter and I stumbled upon your Pregnancy Calendar. I feel like I’ve read darn near everything you’ve written (jeez I hope that doesn’t come off as creepy- your blog & advice column just provided a welcome distraction while I was suffering from pregnancy-induced insomnia and then, you know, the whole babyhood-never-sleeping-again thing).

So let me get right down to it: My 20-month-old daughter goes to a small daycare center, which we love. However, there’s a biter in her classroom. In the last 2 weeks, we’ve received 3 different incident reports that this child has bitten our daughter. He’s younger than her, maybe around 13 months or so, and it seems that the biting incidents usually revolve around toys (he wants one that she has, she takes one that he’s playing with, etc).

I understand that biting can occur at this age and it is a way for this child to express himself when he may not be old enough to figure out another way. What bothers me is that our daycare teachers are telling us that this boy’s parents don’t seem to think the biting is a problem. We’re told they often laugh it off when they receive their own incident reports, saying things like “oh haha, yeah our kid’s a biter haha.”

I get that kids can go through bad habits, and I’m not saying that my daughter is perfect (far from it), but isn’t it our job as parents to teach them right from wrong and redirect when we see behavior that’s not acceptable? I feel like I need to address this issue with the daycare and potentially address this boy’s parents, but I also don’t want to offend anyone (I think we all can get a little perturbed when other people try to tell us how to parent our children). In the end though, it’s MY daughter that’s coming home with bite marks all over her arms, which is NOT ok with me. Help!

Thank you in advance for any advice you can give.

I don’t think it’s your place or responsibility to talk to the other parents, which I doubt would accomplish much anyway. They know their kid bites, and while they may be saving face in front of the teachers by laughing it off, they could very well be mortified and unsure what they’re even supposed to do about it. I mean, they aren’t there at the daycare to referee his interactions with the other kids — that’s the teachers’ job! The child is only 13 months old and probably not very verbal yet, so for all we know they ARE doing what little they can do when they’re with him, but it’s just not translating to daycare yet.

(I mean, how many times have you probably told your daughter not to take toys from other kids? She still does it, even if it results in a nasty bite! Toddlers just be toddlerin’.)

I’m probably extra sympathetic here because I’ve gotten a lot of letters from the parents of the daycare biter/hitter/toy thrower/etc. who are like, OMG, I know it’s a phase but how do I make it STOP? Maybe these particular parents really aren’t all that concerned (because, well, biting IS a perfectly normal phase and not an indicator of future sociopathy), but again: It’s not like you can make a 13-month-old promise “NO BITING TODAY OKAY HONEY IT’S NOT NICE!” at the 8 a.m. drop-off and expect him to remember that at 1 p.m. when there’s a squabble over his favorite toy. There’s not a heap-ton you can do about this kind of behavior other than correct/redirect it in the moment. And correct it and correct it and correct it.

Which at daycare, is the teachers’ responsibility. And it’s also their responsibility to keep your daughter safe. Yes, stuff happens and kids get bumped and bruised, but I think you’re perfectly entitled to escalate your concerns to them the next time you get an incident report:

“Okay, I understand this is normal behavior for this age but three times in two weeks and multiple bite marks is a bit too much. What’s being done to correct the behavior when it happens?”

If they try to unload responsibility on the parents and their cavalier attitude about it, keep pushing. “I understand that. But they honestly could be doing everything they can at home and it’s just not translating here because he’s so young. So what is the center doing about it, and is it possible that his interactions with my daughter be a little more closely supervised so an intervention/redirection can occur BEFORE he takes another bite into her arm?”

That’s a reasonable ask, and that’s where I personally would push for some changes. It’s okay to NOT be okay with a known biter getting free rein to bite when there are (presumably) enough responsible adults in the room to intervene once in awhile. They may not be able to stop every incident, but since I’m guessing your daughter isn’t the only one who’s been bitten (THREE TIMES!) over the last two weeks, that’s a lot of incidents! The teachers really need to figure out a better solution beyond writing up reports and work more closely with this child to target the behavior.