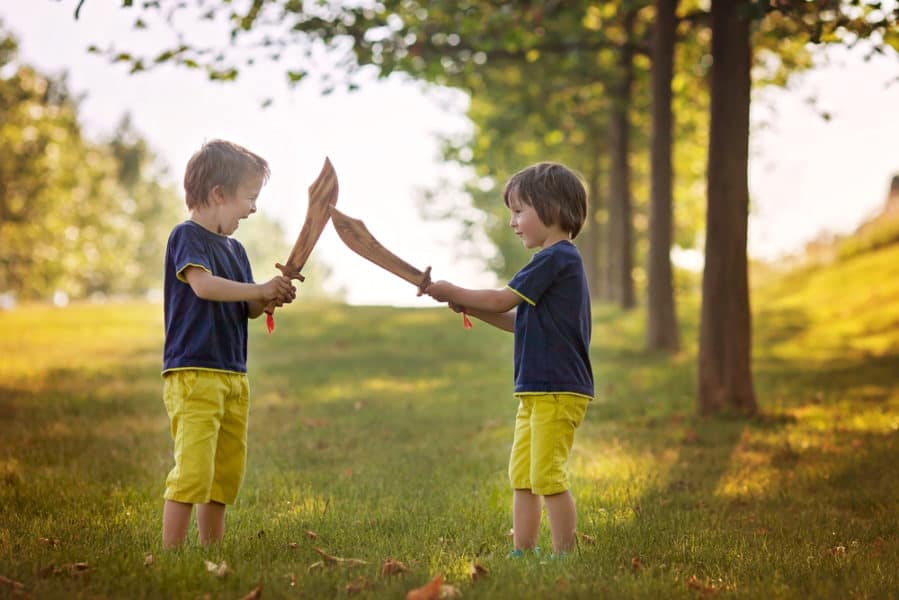 Due to a divorce, I recently moved in with my sister and her family. She and I thought that since our two five year old boys love each other so much that it would be incredible to watch them grow as siblings until we move into our own home, we were so unprepared.

Sure, we expected that there would be some bumpy roads initially but we really thought that given enough time that things would begin to mellow out. Boundaries would be established and the two of them would begin to learn how to play together in appropriate ways. Instead the issues have only escalated and our parental tempers are beginning to have shorter and shorter fuses.

My nephew is more physically aggressive, my son is more sensitive and dissolves into tears at the slightest wrong. Our message to both has been that they need to learn to let things roll off of them easier and not get so upset but it often feels like due to their age and understandable lack of maturity that we’re fighting an uphill battle.

My son has handled the divorce quite well. The separation process happened in many small steps so it hasn’t noticeably shaken his world. He sees his father a lot and talks to him at least twice a day when he is with me which certainly helps.

My nephew also has a younger brother that he displays aggression toward from time to time so I do believe that there is an aspect of jealousy in play but we don’t know how to desensitize him to the changes in his life.

Help! If we don’t figure out something someone is going to be hurt.

Gonna be real honest right off the bat and admit this one is way above my Internet Advice-Type Person pay grade.

First, I would highly, HIGHLY recommend you get both boys a few (individual) sessions of play therapy, and then (if the counselor/therapist/LCSW thinks it’s worthwhile) maybe a few sessions together.

And I also have to stop you right here, when you mention that “the separation process happened in many small steps so it hasn’t noticeably shaken his world.” Except that…it has, just maybe not in the way you were expecting. He’s gone from an only child — possibly in familiar surroundings? or maybe this wasn’t his first move during the process? — to living with two other children, including one who is actively aggressive and physical with him. That’s a pretty big shake-up!

Both cousins’ lives have been shaken

This living situation can be salvaged

I’m not trying to make you feel bad or guilty here! I understand you’re disappointed that the living situation isn’t matching up to you and your sister’s expectations, and I do believe that with the proper support, this living situation 100% can be salvaged. Things aren’t naturally improving with time, though. And maybe the tactics of “letting things roll off easier” and “desensitizing” aren’t the best fit for these particular children.

Your nephew is coping with jealousy, upheaval, resentment, and whatever else through escalating aggression. Your son is coping with tears and meltdowns.

Not that EITHER of those coping methods are bizarre or unheard of for five-year-olds! I’d say they’re both reacting in pretty typical ways. (I’m sure there are for-real, full-blooded siblings out there with similar dynamics.) But “typical” doesn’t mean “emotionally healthy” or “compatible with living together under one roof without wearing their parents’ nerves down to the nub.”

So. I’d recommend you are your sister get a copy of Siblings Without Rivalry: How to Help Your Children Live Together So You Can Live Too. It’s a classic, and for good reasons. Make it this month’s Sister Book Club selection and see if you can employ some of the suggestions individually and together. But do this while ALSO looking around your area for a third-party child therapist. Someone who can work one-on-one with each boy and help and validate all the Big Feelings and Changes they’ve been through, while working towards the goal of two cousins who really do love each other very much…and the added bonus feature of knowing how to live and play with each other without driving the rest of the household crazy.

More on siblings and family at Alpha Mom: