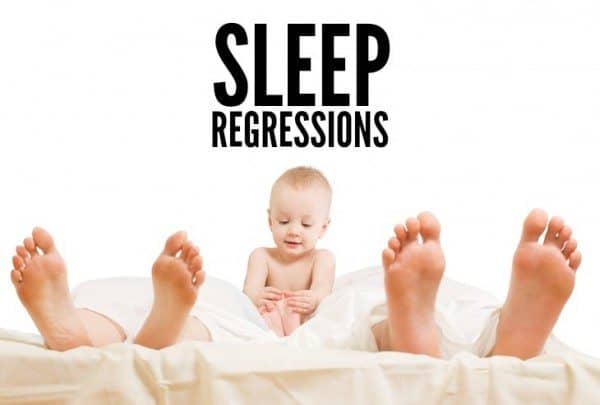 I have a wonderful, amazing, so adorable little boy who used to be a champion sleeper. I would listen when people complained about their kids waking up at night and think about how that would never happen to me – congratulating myself on my fantastic parenting skills.

Now… I have a three and a half month old who has suddenly transformed into a nightmare sleeper! We went from 7/8 hours a night to waking up every 2 hours, 3 on a good night.

We have a bedtime routine that involves a bath, a bottle of breast milk, and a song and rock to sleep. He always goes down sleepy but awake and is usually pretty good, sometimes requiring one more quick song and rock before falling asleep next to our bed in his rock and play.

When he wakes up I used to feed him (he was only waking up once, remember!) but now that it’s every 2 hours, I don’t want to encourage that habit! So I have a confusing, inconsistent routine of feeding him once around 2am and just rocking/soothing him the other times he wakes up. Feeding him is the much easier of the two since he is furious when not allowed in my shirt and cries no matter what else I try.

So! My question is, what should I do and will I ever get my champion baby back?? Most things I have read say not to officially “sleep train” until 6 months but what can I do until then? How can I avoid creating a bad habit (needing to eat to go back to sleep) without starving my baby?

Please please tell me you have some advice soon – our house is very tired.

The “four month sleep regression” can start as early as three months or as late as five (or even six) months. It happens for a bunch of reasons:

1) A simultaneous growth and developmental spurt — baby’s brain is suddenly becoming much more alert and “on” all the time, he’s probably working on rolling over, gaining more control over his arms and legs, and senses now that you are a separate person who goes away. (And he’s probably not a fan of the going away.)

2) Changes in sleep patterns — around four months a baby’s sleep gets more like ours. He’s now entering REM sleep for the first time. REM sleep is lighter and easier to disturb. Your son sounds like he’s only getting REM sleep and is waking himself up before entering the next deeper sleep phase. Because he doesn’t know how to soothe himself yet, he’s not able to settle back down and start over, and the cycle continues. And thus ensures you’re dealing with an increasingly overtired baby whose sleep seems to get progressively worse as the nights go on.

3) Changes in sleep needs — as if there already wasn’t enough going on, he’s also probably in the middle of a nap transition. This means he’s close to eliminating one (or even two!) of his daytime naps, but the transition isn’t complete or consistent yet. Or you’re continuing to let him nap as much as he used to, without realizing the extra daytime sleep is mucking with nighttime.

While I also don’t recommend sleep training at this age, a sleep SCHEDULE (day through night) is pretty much your best defense and hope for righting the sleep ship. Because the regression isn’t always necessarily a short phase that magically goes away on its own — the bad habits we tend to let them get away with to just “survive” the regression tend to stick, and it can sort of go on indefinitely. Boo!

You didn’t include any details about your baby’s nap schedule or what time he goes to bed. That’s likely the key problem here — he’s ready for a more structured nap routine and probably a much earlier bedtime. I’ve written a lot already about the 2-3-4 schedule, but 3.5 months can be a bit early for a two-nap day — even Googling around for sample nap/bedtime routines for a 4 month old brings up a lot of conflicting advice regarding the number of naps. Three or four naps during the day can still be common, with a focus on making sure he doesn’t stay awake too long between each one to avoid the dreaded overtiredness. And then bedtime should come fairly soon after the final nap — couple hours at most.

Not to be a lazy advice columnist, but Imma let you do your own Googling Thang about the four-month regression and sample nap/bedtime schedules. See which one most closely resembles his current number of reliable naps, or which one seems like something you could apply with just a few tweaks. Keep track of his nap starting and end points, and look out for larger chunks of awake time that you can shorten or eliminate.

Consider trying a very early bedtime — like 6:30, and structure naps backwards from there. (Or forwards from his current waking time, if that’s somewhat consistent.) I always made the same mistake at this age of not realizing my baby’s final “nap” of the day was technically when I should have been putting him to bed!  If he’s yawning or rubbing his eyes during your bedtime routine, that’s a BIG sign that his bedtime is too late and he’s going to struggle with getting over the REM sleep hump. Your goal should be to get him ready for a nap or bed about 15 minutes BEFORE the recommended, scheduled time so he 1) isn’t overtired, and 2) continues to find that “sleepy but awake” sweet spot.

As for the to nurse or not to nurse question: Two or three nighttime feedings are to be expected at this point. Some babies drop to one, but many do not. Obviously he doesn’t need to nurse every two hours, but since he’s in the midst of a growth spurt and the sleep regression, you need to recognize that what worked before is simply not what’s going to work going forward. Newborn sleep/eating is not baby sleep/eating, alas.

With that early 6:30 bedtime, I’d say expect him to wake up hungry in the 10-11pm range, then again between 2-3am, and finally a waking/eating at 6-7am. Then it’s playtime followed by Nap #1. Any other additional night wakings should involve minimal involvement from you — do your best to soothe him without picking him up. I was always a big fan of the musical crib aquariums/soothers at this age, since 1) it was an easy thing to turn on without picking them up, when I knew the waking wasn’t food related, and 2) at some point they all figured out how to turn it on THEMSELVES and could get back to sleep without me.

Good luck! The sleep regressions suck, no doubt. You’re going to be fine, though, since you’re aware of the bad habits you need to avoid, AND because he’s proven that he knows how to fall asleep on his own at bedtime. That’s huge! Getting him on more consistent routine during the rest of the day — and knowing what feedings to expect throughout the night vs. regression-based wakings — SHOULD help get you through this one. 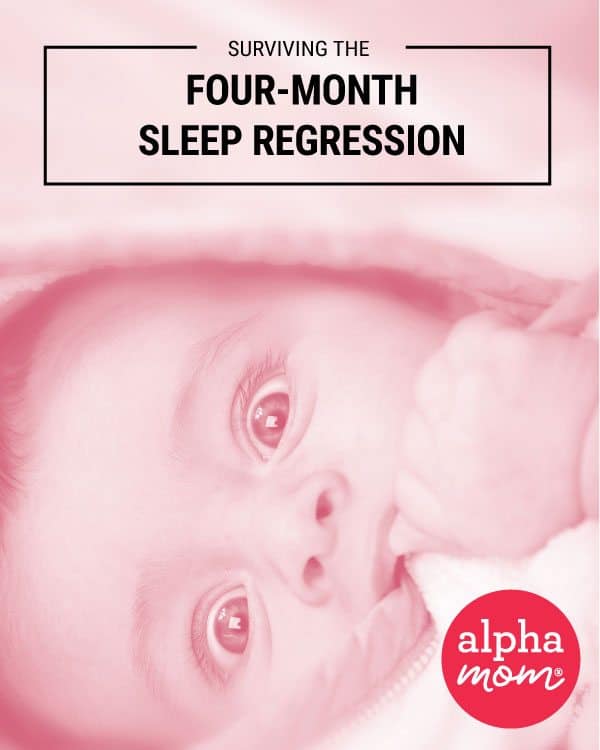