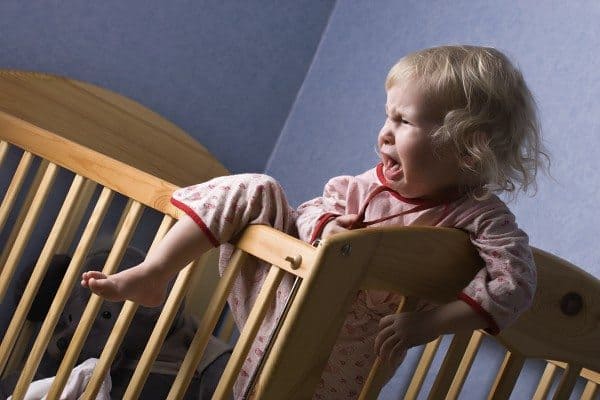 When Your Toddler Stops Sleeping

I’ve written before and you were amazing in helping out when I had drama with my Mother-in-Law so I figured I would pitch another question your way and see what you had to say. My son is now about 17.5 months old and is driving.me.insane.

Since he was around 11 months old he’s been sleeping through the night getting about 11 hours and he dropped to one nap a day around a year old and that nap was about 2 hours. Lately that has gone all to hell. About 3 weeks ago he started waking up early in the morning, somewhere between 4am and 5:30am. He will not go back to sleep at this point even though he is clearly still tired. We’ve pretty much tried everything to get him to stay in bed longer and sometimes we’ll get an extra 30mins-1 hour, sometimes he’s just up and that’s the end of it.

Naps have also gone all to hell and are only about an hour these days. He’s cranky, over-tired and throwing temper tantrums at the drop of a hat (which I realize is age-related anyway). The thing that’s interesting about all of this is that he naps at daycare. He’ll put in at least 2 hours there if not more and doesn’t wake up after an hour, or at least that’s the report I’ve gotten from the women who are with him.

I know he’s getting molars but those have all cut through and when he wakes up he screams bloody murder until one of us comes in. It almost sounds like he’s scared but it’s not night terrors considering how responsive he is when we go see him. I suppose my question is, do you have any insight into what’s up here? Did you go through this with either Noah or Ezra and did it pass by?

I’ve combated this on the weekends by giving him two naps if necessary getting his daytime sleep back to 2 hours and we put him to bed extra early to help manage his over tiredness. If you have any other insight or suggestions let me know because this is killing me. I kind of feel like I’m doing everything wrong all over again because of how miserable we all are right now.

Thanks in advance for your help. If you haven’t dealt with this nonsense with your kids hopefully Ike won’t be an exception.

Everybody! Say it with me! Let’s give a big cheer for the 18-MONTH SLEEP REGRESSION YAAAAYYYYY!

I know it’s cold comfort, but this is so, so normal. Hair-pulling, eyeball-searing, crazy-making NORMAL. I don’t know why more pediatricians don’t arm parents with information about sleep regressions, because it would be SO NICE to know that hey, yeah: Sometime around 18 months old your child’s sleep will go to absolute HELL. Both for naps and nighttime.

(For the record, I don’t think your daycare ladies are telling you the full truth. I bet he’s giving them hell too, but they’re trying to assure you that everything is fine. Because MY daycare ladies did the same thing to me during Noah’s four-month sleep regression, just INSISTING that his naps were continuing on all perfectly and peacefully there. This white-lie had the opposite effect on me, because it made me feel like a failure at home because WHY AREN’T YOU NAPPING FOR MEEEEEE. Then one day I had to drop off some extra supplies for him after lunch and caught them doing laps around the room with a howling, pissed-off Noah who was CLEARLY in no mood for a nap, oh hellll no.)

Anyway. Obviously, you want to rule out other possibilities (festering ear infection, molars, night terrors, etc.), but once you blow through that relatively short list and are STILL dealing with crazy non-sleeping patterns in the 17-19 month range, yep. 18-month sleep regression. Hello and welcome to it. Please read this entry by the great sleep-regression-whisperer Ask Moxie, because she describes it perfectly. It’s normal. It’s awful. It’s not your fault, there’s not really anything you can do to fix it, but. But! IT WILL PASS.

I wish I could remember how long it lasted for us — and oh yes, we went through it with both Noah and Ezra, and I am confident we will go through it with Ike (who just last week seemed like he was getting a head start on the four-month regression, then went back to normal the last two nights, ebb and flow and unpredictability, ahoy!). It was definitely one of the longer, more brutal regressions. A month, at least, I’d say. (I’ve blocked it out, lalalala.) The early ones tended to last under two weeks, on average.  And since the 18-month regression hit the boys’ naps just as hard, it meant day after day of dealing with a cranky, willful, overtired toddler who JUST NEEDED TO SLEEP BUT WOULDN’T.

I have no solutions or suggestions. You’re not doing anything wrong. You just go day by day and hope for the best, and hope that maybe today is the day he’ll snap out of it and go to sleep. If not, well, maybe tomorrow.

I do have a ton of sympathy though, because oh. OH. There were days when my exhaustion and frustration would take over and I just. Couldn’t. Deal. With my child’s sleep-deprived tantrums and whining. There were days when I made multiple trips to the bathroom to count to 10. Who is this annoying, non-sleeping monster child and where did my sweet little baby go? Why did I think we were so lucky to have a good sleeper only to have it all turn to crap before his second birthday? WHY GODS OF HYPERBOLE, WHYYYYY?

And then, just like that, BAM. Done. Over. Back to sleeping through the night and waking up cheerful and well-rested and napping just as good as before.

That will happen for you too, I promise.