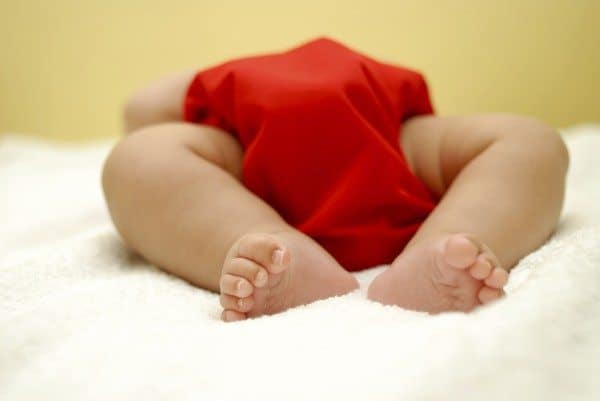 Okay, I know you are in the midst of writing a cloth diaper manifesto, and I am so scared you won’t get my question answered. The deal is that I’m pregnant with our 5th child, super happy and hoping to out-breed all the jerks who ask me if “I know how that happens.” I loves me some big family chaos. I also stumbled upon cloth diapering with our 4th little monkey when my husband was laid off and I went all Home Economist by paring our expenses down to $2000/m including housing and such.

So, needless to say I went on ebay, bought some pocket diapers, and never really thought about doing any research or anything. The diapers were great until we moved into an area that keeps the climate the same temp as Hades. The fleece caused our little preshus to get heat rash in his boy parts and thus after SO MUCH savings, I turned back to the evil Earth-hating disposables because (cue God laughing), I thought he’d be potty trained soon. I also GAVE my perfectly good diapers to my hippie-friend who lives in the arctic.

Soooo, #5 is coming along nicely with the added bonus of constant vomiting, and I’m thinking I need to figure out this cloth diapers thing fast. First, I hate everything about disposable diapers as does my husband. Second, I never found cloth to be inconvenient because I run the washing machine all the time since we have our own little tribe under our roof. But what is our COOLEST option? Is bamboo cool? Or am I stuck with the indian cotton? Don’t mention wool to me or I will break out in a hot flash, I promise.

Please answer this question in your manifesto. I would be ever so grateful!!

Ah, what the hell. Let’s just go ALL CLOTH DIAPERS ALL THE TIME this week and talk about them here, too. The topic of cloth diapering the hot, humid DC summer was something I was planning to briefly mention in my Cloth Diapering A Newborn Novel-Length Memoir, but probably not in enough detail to satisfy you. So…spin-off time!

What I’ve learned: It wasn’t the fleece on the cloth diapers that caused the heat rash. It was the waterproofed cover. Pocket diapers have an outer shell made from polyurethane laminate (PUL). It’s a popular material for reusable diapers and diaper covers because it’s 100% waterproof but also incredibly thin, allowing for a nice, trim fit without a lot of bulk. It’s awesome stuff! But it’s not breathable. Moisture stays in, fresh air stays out, and the environment inside your diaper can get hot and humid and icky. The fleece layer is there for this very reason — to let air circulate and wick as much of that moisture away from baby’s skin and into the guts of the diaper.

PUL layers aren’t usually a problem for most babies because the diapers are getting changed frequently and little bottoms get aired out…but in a super-humid climate, they can definitely pose a challenge. You’d probably have to commit to a LOT of naked-butt time during the day. And, if problems persist, maybe even opt for a disposable overnight and save the cloth for daytime, when you can make sure baby isn’t stuck in the same wet diaper for very long.

Or you can look at your non-PUL diapering options. And I know: It sounds insane, but the issue here is BREATHABLE vs. NON-BREATHABLE FABRICS. I know you hear “fleece” and (ducks) “wool” and think heavy hot winter clothes, but they just…aren’t, when it comes to diapering. I don’t really know how to explain it, except not that I’ve SEEN it, I BELIEVE it.

Because I thought fleece and wool covers sounded freaking crazy insane-o backwards, when preparing for Ike’s early-June birth. I bought a combination of cotton prefolds, bamboo fitteds and one-size pockets. The prefolds and fitteds required covers, so I bought some PUL ones because they seemed like the “lightest.” This was…dumb. I admit it. That meant, no matter what diaper option Ike was wearing, his butt was always encased in a non-breathable outer layer.

He got heat rash. Of course he did. I figured out that he could wear the fitteds without a cover around the house, and that helped a lot. Bamboo is heavenly…so soft and breathable. I haven’t personally tried any of the “big” brands of fitted diapers — I went with the handmade-by-moms route and loved everything about them. No blowouts, perfect fit, adjustable soakers, cutest fabrics on the planet, etc. And no rash! Well, until I slapped one of those PUL covers on him overnight, or when we ventured outside in during the horrible, 100+ degree heat wave we had in June. It was like a dang SAUNA up in his pants.

Finally, a friend told me I really, really needed to try fleece or wool covers. Just…try them. It sounds wrong! I know! This is exactly what you ordered me NOT to talk about! Wait! Come back!

I couldn’t even believe I was ordering them, and you should have SEEN my husband’s face when the package of lambswool soakers arrived. He thought I had truly gone around the bend, as I explained my intentions of putting a damn SWEATER on my baby’s BOTTOM in AUGUST.

But I did. And lo, it was miraculous. I really don’t know how to explain it, except to once again stress the importance of breathability. You obviously need something waterproof on a diaper (again, unless you’re just chilling at home and don’t mind checking the diaper occasionally for dampness on the outside), and if you need waterproof AND breathable AND antibacterial, wool is it.  Hey, it seems to work pretty well on the sheep, right?

Fleece also breathes, though I’d say it’s more water-resistant than waterproof: Ike wears his fleece covers during the day, but I don’t like them as much at night because some dampness does start coming through to his clothes after awhile. Nothing terrible or anything, but wool works better.

Swear to God: On a really hot, humid day (or morning, after Ike has slept through the night), and I change a diaper with a PUL layer, be it a cotton prefold or bamboo fitted or FuzziBunz or bunGenius pocket, Ike’s skin is slightly damp. A warning sign that I need to let him go commando for awhile or apply some diaper-safe rash ointment. (I like Grandma El’s.) When I change a diaper inside a fleece or wool cover…he’s dry.

And in the beginning, because I just couldn’t believe this crazy talk about these covers NOT BEING INSANELY HOT AND UNCOMFORTABLE, I used to regularly poke my fingers inside the diapers to gauge the temperature of Ike’s skin. And he was FINE. His waist and butt felt no warmer than the rest of his body. No lie. SCIENCE.

Ezra wore the pocket diapers with a PUL layer exclusively and never had a problem, even in the summer. Though I was always pretty good about giving him bare-butt air-out time. I chalk Ike’s sensitivity to him being a newborn and this past summer being exceptionally hot and humid. In a climate like yours, year-round, I’d use anything with a PUL layer very, very sparingly, only when you really need them. You probably know that the rest of your family stays more comfortable in breathable, natural fabrics…or in moisture-wicking synthetic fibers when they’re playing sports or exercising and the sweat really flows. In the diapering world, wool and fleece are the equivalent. Wool is natural and breathable, fleece wicks the wet off the skin. For the absorbent guts of the diaper, go with cotton or hemp or bamboo for further natural breathability.

Our plan was never to use prefolds/fitteds/covers long-term because by next summer he’ll definitely be big enough to fit into our entire hand-me-down stash. But…nobody tell Jason, but, uh…I might change that plan. I’m a total convert. Join me! It’s only KIND OF like a cult, a little bit.

PS. There is also a waterproofed cotton cover that I have never tried, but have seen mentioned during “need a breathable cover option but am scared of wool” discussions: a Niji cotton cover. I don’t know much about it, like how exactly it’s been waterproofed and still retains the breathability of cotton, but it’s an option if I’ve failed to convince you that wool and fleece aren’t actually as backwards-crazy-talk as they seem at first.