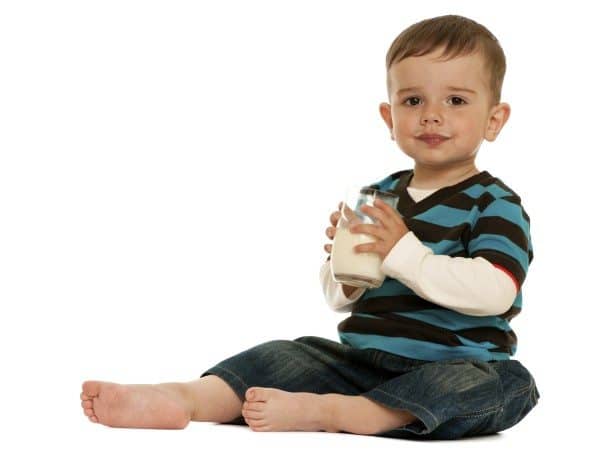 Congratulations on the kids and the life milestones and all of that good stuff! Can you or your commenters answer a question for me? My vegan friend gives her toddler soy-based formula meant for 12-24 month olds, and she does so because it has extra nutrients beyond soy milk and they have a vegan diet and she wants to be extra sure he’s being well fed. So, I get that.

But why does the dairy-based kind exist? (Except to confuse my husband back when my daughter was 6 months old and he bought a huge tub of the toddler kind, which is why I know it exists and why I know my now 19 month old daughter LOVES it.) Is it better than straight up whole milk?

Whole Milk is Best for Toddlers

I asked my pediatrician about toddler formula at Ezra’s 12-month visit — he’d weaned from breastfeeding two months prior and we were working on weaning from the bottle as well, but I was curious about the milk vs. toddler formula thing too. Ezra was (and is) a 10th percentile peanut in weight, despite being a pretty fantastic eater, accepting a wide variety of foods with gusto. Was it possible he was still missing out on something? Should I give him a big-kid formula, just to be safe?

Hellllzzzzz no, my pediatrician told me, in so many words. She waved the toddler formula off as a simple marketing ploy to get parents to continue to spend money on a damn pricey product. Whole milk* was absolutely the way to go (curbed to about 16-18 ounces a day), along with a variety of healthy solid foods. There was nothing wrong with Ezra’s low-percentile weight: He was just a skinny, healthy, active kid who was self-regulating his diet exactly the way he was supposed to.

A quick bit of Internet research reveals other pediatricians agree that “there is really no evidence to show that these are preferable to using cow’s milk when your child reaches 1 year of age.” There’s some extra calcium and phosphorus in them, which — if there’s a concern — can easily be obtained through a multivitamin or supplement. And that linked article points out that depending on toddler formula to let your child “drink his nutrients” can end up reinforcing bad eating habits, since it can passively give parents permission to indulge eating whims and exclude real milk and less popular healthy foods. “Eh, he hates vegetables so I’m not gonna push. Here’s some boxed mac-n-cheese and apple juice for the 10th day in a row. The formula will make up for it, I’m sure.”

And as you’ve seen with your daughter, toddler formulas are sweet and delicious and an easy sell to kids (and worried parents) — kinda like those chocolate-flavored nutrition shakes for grown-ups, or something. There’s nothing HARMFUL about them, other than the possibility of your child developing a strong preference for the sweetened formula over boring regular old milk, but for an otherwise-healthy toddler, they’re just not necessary.

The Case for Toddler Formula

That said, I am sure there ARE times when a toddler formula IS preferable. I can see the reasons for your vegan friend’s concern. Though again, if she wants to raise a vegan child she also needs to raise a vegan EATER, because at some point the formula is gonna have to go and a well-balanced diet needs to take over, and the window for establishing that diet is NOW. (And I know I’ve met my share of “vegetarian” children who eat exactly zero fruits and vegetables, but basically live on pasta and peanut butter and multivitamins). (Says the meat-eating mother of one of the world’s pickiest eaters, so pot, kettle, cast no stones, etc.) But it’s possible her pediatrician recommended the formula just to be safe, so sure.

And that’s the thing: Chances are, if your child would genuinely benefit from toddler formula vs. milk — like if there’s a feeding problem, like an oral motor delay, swallowing issue or prolonged illness — your doctor will let you know. Otherwise, feel free to skip the pricey powders and head to the (well, also kinda pricey) organic milk instead.

*The American Academy of Pediatrics has tweaked its recommendation, by the way: Instead of whole milk until two years old, they now say weaned babies and toddlers with certain risk factors (family histories of obesity, high cholesterol or heart disease) should get reduced fat (2%) milk from 12 months on. At two years old, all children should switch to 1% milk. Ew. I know. We had to change pediatricians for insurance reasons this year and the new doctor practically had a STROKE when she heard my boys still drank whole milk. I didn’t know! Good Lord, it’s hard to keep up.