Twitter Facebook Pin It Email Article
Prev DIY Thanksgiving Family Photo Cork Centerpiece Next Holiday Hot Toys 2016: Hits and Misses (Or, What To Buy and What To Avoid) 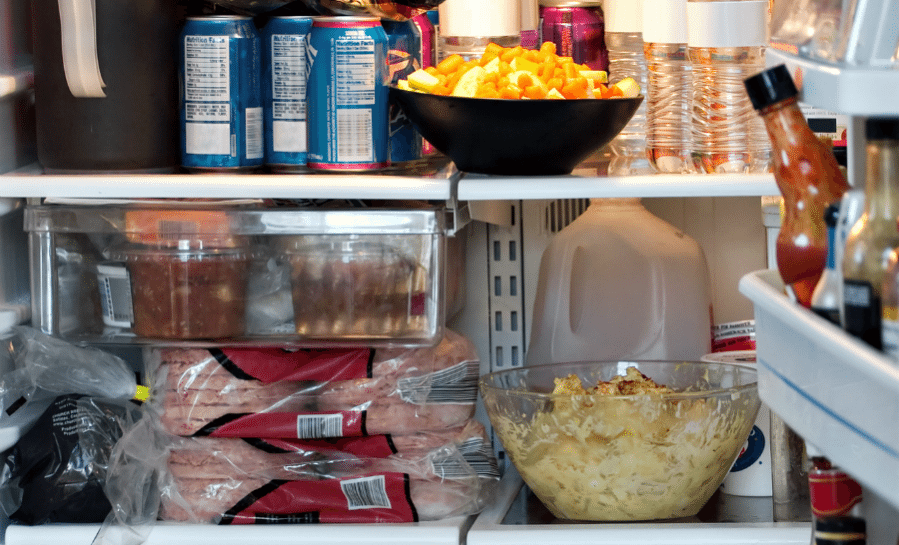 They say confession is good for the soul. I don’t know if that’s true, but I know that I’m going to confess, anyway, if only to soothe my own feelings of inadequacy and disgustingness.

Forgive me, Internet, for I have sinned. It has been nearly a year since I cleaned out my refrigerator. In fact, it was probably around this time, last year, when I headed to the giant stainless steel box in a fruitless attempt to win a game of Thanksgiving Preparations Jenga. And thus the gymnastics began.

It starts with clearing a spot for the turkey, which seems like it will be straightforward until I remember (every. single. year.) that I need room for not just the bird itself, but the giant pot in which we brine it each year. (Sure, I saw that episode of Good Eats where Alton Brown explains he has a cooler he uses only for turkey-brining, but we haven’t quite reached that level of dedication.) Most of the time we manage to situate the turkey simply by moving things around, but then there’s… everything else.

Because this tends to be a busy work week for me, and my husband and teenagers are off of work and school, I’m able to send them off to do the food shopping. And probably they could figure out the fridge without me, but hard decisions need to be made. And my office is right off of the kitchen. And sometimes I need to step in while negotiations are being made.

For example: Yes, there was—somehow—a green smoothie that had been shunted to the back of the fridge at least several months ago. The fact that it was no long edible was indisputable, of course; the fact that it had become an inch of murky liquid topped by multiple inches of sinister-looking solids, however, was horrifying. It couldn’t just be dumped out, because when I tilted the bottle into the sink, the contents didn’t move. Do I have shame? Yes. I have shame.

Also: I don’t think my husband believed me when I tried to explain that tahini can last in the fridge for up to a year, and the fact that it’s separated isn’t cause for alarm. If we’re being honest, that particular jar didn’t look all that different from the long-past-reasonable-consumption smoothie, after all. But tahini is expensive and I didn’t want him to throw it away. What if someone has a sudden craving for hummus??

I make two cranberry sauces for Thanksgiving each year: one sweet, one spicy. The spicy one calls for some horseradish. Know what else I use horseradish for in my daily cooking adventures? Absolutely nothing. The smallest jar of horseradish one can purchase at the store is about twice as much as I need for this once-a-year recipe; today I threw out last year’s jar and replaced it with this year’s. Would it make more sense to throw out the jar right after I make the cranberry sauce each year? Probably. Will I ever do that? Doubtful.

There is always half a bunch of sad celery hiding in the crisper drawer. That’s an easy toss. There is often an inch of yogurt inside a container that was somehow shoved to the back of the very top shelf but expired six months ago, too. Some exotic juice we opened for a drink mixer at a party and never finished…? Yep, half a bottle of mango juice, in there for let’s-not-think-about-it period of time. And beer. My goodness, all the beer. I don’t drink beer and I think my husband has had maybe two beers in the entire past year. But somehow, start digging around in the fridge and you’ll unearth twelve kinds of beer. (Someone comes to the house and brings beer and leaves the leftovers. We put them in the fridge. The next time we invite guests, they ask what they can bring, we say they don’t need to bring anything, and they show up with beer. Lather, rinse, repeat.) Most of the beer can be removed from the fridge. (But not all, because we have guests coming for Thanksgiving, and what if they want beer?)

My jar of sourdough starter was hiding in a back corner, too. It was sad and unfed, and that’s how I ended up stopping to whip up a coffee cake in the middle of putting away groceries and cleaning. (What?)

I want to tell you that as we clean out the fridge, we carefully rinse and recycle any containers as needed. But as this is a true confession, I will admit that some horrors found deep within are simply too terrifying to investigate any further than a quick chuck into the waiting garbage can. Hopefully Mother Earth understands.

After longer than it seems should be necessary, the turkey was nestled on the lowest shelf, the produce bins were packed full of vegetables and green apples, and the remaining shelves were carefully arranged to hold the maximum number of items because they, too, are full of things like bags of cranberries and other items we only need this one week in November. My husband folded up the grocery bags and put them away. I admired the stuffed refrigerator for one last minute before closing the door on a job well done, and only allowing myself the briefest moment of acknowledgement that by tomorrow (as I start baking pies and doing other prep) I will be out of room, again.

“What do you want to have for dinner tonight?” my husband asked. I froze. You mean… we have to eat tonight, too?

He offered to pick up take-out. He is a wise, wise man. Happy Thanksgiving!