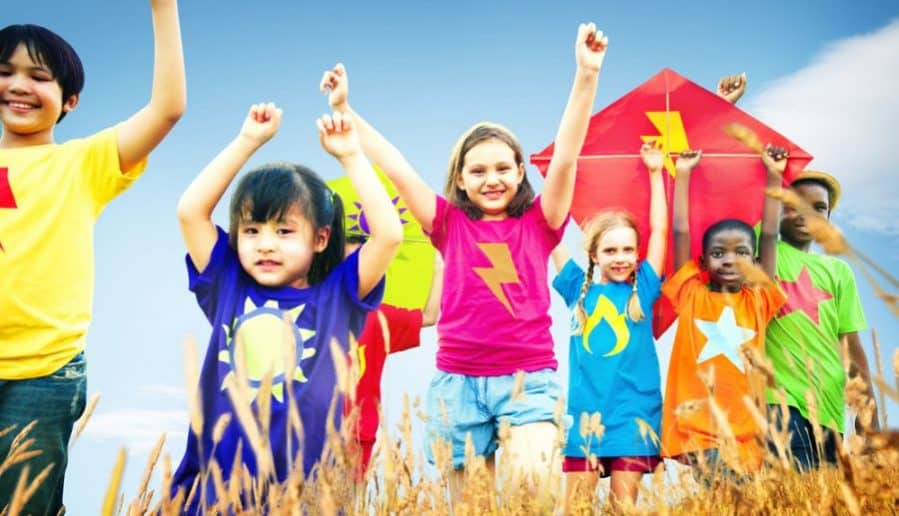 I love the idea of a lazy, 1970’s inspired summer. Where kids pass the afternoons sitting on tire swings, running through sprinklers and eating ice pops on front porches.

A time when boredom quickly gives way to fort building, messy art projects and neighborhood lemonade stands. And with no set bedtimes, there are hours to run around catching fireflies, playing cards and whipping up cupcakes (with lots and lots of toppings).

I love the idea of ALL of this.

But I can’t do it and there is no way I’m feeling guilty about it.

I signed my kids up for a lot of summer camp. Yup, I registered them for the most affordable summer camps I could find and I filled out a stack of camp forms. And sent my children on their way.

I feel so grateful that I can afford to send my kids to camp. So many families don’t even have the financial option and often have to scramble to figure out what to do with their kids while they’re working during the summer.

So I feel pretty lucky to have the option and know it’s the right choice for our family.

Why? Well, I have a lot of kids. Five of them. So the chaos of them being home all day is pretty overwhelming. Plus, I live in Florida where it is one-trillion-degrees in the summer so it’s just about impossible to be outdoors unless you’re at a pool or the beach.

And there is so much sibling fighting. Someone is yelling.  Someone isn’t playing fair. Someone got more turns. Someone is always crying. There’s no crying during a lazy, 1970’s inspired summer! Right?!

Plus, I am constantly battling screens. You take away an iTouch and suddenly an iPhone pops up. Everyone wants to watch a movie. Even though they just watched one and can’t agree on what to watch now anyway. Children – did you forget about that refreshing sprinkler?!

But here’s the biggest reason, I really don’t feel guilty about summer camp. I pick my kids up at 3 pm. That is still a tremendous amount of time to keep those adorable people busy. Hours in fact. Hours to play on tire swings, build forts and even run a lemonade stand.

And with them in summer camp for a good chunk of the day, I can keep my sanity. I have time to get some work done, do errands and even think about fun stuff we can do when they get home. Not that they will agree on what they want to do. Because, sigh, they won’t.

Camp is my kind of summer. And although I might have a fantasy of some idyllic, relaxing easy breezy summer where kids just hang out all day – I know the reality makes me want to hide in the closet with a bag of Cheetos and a glass of Chardonnay.

So this is our kind of summer. With a lot of camp, some free time and a content mother.