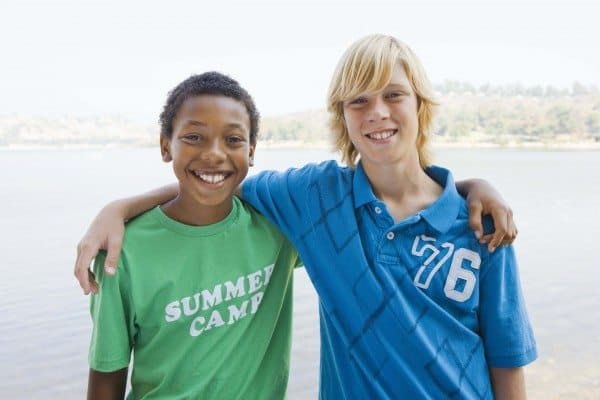 Are You and Your Kids Ready For Sleepaway Camp?

Summer camp. The butt of many jokes, the setting for many horror movies, the rite of passage that marks the time of childhood when one is old enough to be away from home, yet not old enough to have any responsibilities.

How do you know if your kids are ready to go to sleepaway camp? And are you ready to let them go, or will you spend the week teary-eyed lying on their bed waiting for their return?

Last year was the first year any of my children attended a sleepaway summer camp. I dutifully went through the packing list, shopped for every item, labeled everything– though if you want me to let you in on a little secret when you are a part of a large family with closely spaced siblings your underwear is already labeled with your initials.

I was excited for them. They had talked non-stop about camp for months and finally the time came to put them on the bus that would take them away.

I am usually not an overly emotional mother. I love watching my children grow and take steps toward being independent. So when the bus pulled away and I burst into tears behind the steering wheel of my car I was a little surprised with myself. My babies were going away to camp with people who were strangers and they had no way to contact me. Sure, when I initially signed them up for camp lo those many months ago, the complete ban on electronic devices, to include cell phones, was a big positive for me. Now? Watching the bus drive away? I wasn’t as sure.

All of these things raced through my brain.

I went to summer camp for several years as a kid and I hated every moment of it. And it was day camp, not sleep away, I can’t even fathom the horror if I had been forced to also sleep there. I just remember that the days seemed so very long and hot and they were filled with things I was required to participate in. I was not, and still am not, an outdoorsy kind of girl. My idea of communing with nature was sitting under a shady tree with a book. I complained bitterly about camp every single day and night, all summer long.

But as I have had to learn over and over again, my children are not clones of me. I know, it is quite shocking! I gave to birth to them the least they could do is be exactly like me. In fact, they seem quite intent on being my polar opposite– these gregarious, outgoing, athletic little people. Exactly the sort of kids who would love to spend their days swimming, kayaking, shooting arrows, and making endless keychains of gimp and macrame wall hangings, though I might be dating myself a wee bit with that last one.

They had all the signs of being ready for summer camp that the so-called experts talk about, as well as some of my own personal benchmarks.

1. The biggest in my opinion, the desire to go to camp

2. They have all successfully spent the night away from home

3. They can take care of their personal hygiene

5. The idea of being around people they don’t know and making new friends excites them, rather than terrifies them

6. Even though I limit it severely, they need a break from screen time (video games, computers, etc) and interacting with other children, who are not members of their family or close friends, on a constant basis is good for their interpersonal skills

7. Being by themselves and being responsible for their own choices builds character, and who can’t use a little character building from time to time

8. The camp that came highly recommended by friends and neighbors was a good fit for their interests

9. As a parent you are ready to let them go

10. And as a good friend of mine said recently, once your kids are sleep-away-camp-age they are probably staying up later than you at night, sleep away camp gives you the opportunity to have sex at a decent hour again!

Only one of my fears came to pass.

I asked my nine-year old upon his return home why he hadn’t brushed his teeth or showered. Do you want to know what he said? He said, “You didn’t pack me any shampoo or a toothbrush.”

I reached into his duffle bag filled with completely clean and still folded clothes and pulled out the toiletry bag I had so painstakingly packed. Do you want to know what he said then? he said, “Huh, I wondered what that was!”

Apparently he didn’t wonder enough to unzip the bag and look inside.

Looking on the bright side, it is all packed and ready for this year.