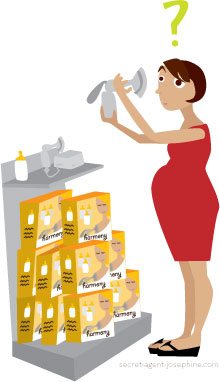 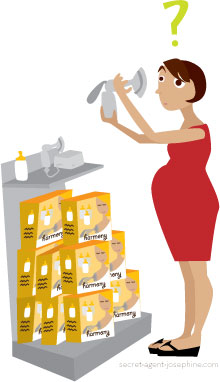 During my first pregnancy I registered for (and received) a small manual Avent Isis pump. Several people who saw it on my baby registry list gently patted my head and suggested that I wait and go the double-barrel hospital-rental route instead. Oh, I was! I told them! I have read all about pumps and pumping and pump-related accessories! The hand-pump is for later, for when I’m back at work and everything is going swimmingly and perfect and I just think I’ll want something small and discreet, you know?

And they would nod and pat my head again, because oh, AMY.

I did rent a hospital-grade pump. First, the LC gave me a big blue beast of a thing that tore my already battle-scarred nipples up. (“Pump trauma.” It’s apparently an actual Thing.) I swapped it for another hospital-grade pump, the Medela Symphony. This pump worked in that it did not hurt, but not so much with the actual production of actual milk. Jason would feed my losing-too-much-weight newborn formula while I pumped and cried and felt like a malfunctioning dairy cow. I hated it. HATED.

My plan to stockpile breast milk in preparation for returning to work was a spectacular failure — Noah went to his first day of daycare with the entire stash of one-and-a-half bottles. Likewise, pumping at work never produced enough to see him through the next day. Sometimes I didn’t even bother bringing home the sad little half-ounce amounts. I tried EVERYTHING. Baby photos, baby clothes, visualizations of rooting and waterfalls. The only thing that seemed to trigger a letdown was watching a video clip of Noah nursing, complete with those snuffly greedy baby noises he’d make, but it wasn’t like I was ever awash in ounce upon ounce of liquid gold.

The Avent hand-pump was indeed, a laughable choice for me, as it was nowhere near powerful enough for my stubborn boobs. Oh, AMY.

I never pumped “enough” at work, either. I had an office with a door and a lock and assumed that I’d have no problem finding time to pump during the day. And then I’d show up for work and some crisis would happen or a meeting would run over and then suddenly it was 2 pm and I hadn’t even eaten lunch, much less pumped to relieve my aching boobs. Seriously, there are few things that impress me more than hearing about mothers who end up pumping more or less exclusively for month after month. I want to give them all the gold stars and medals that we all joke about not getting.

I stopped viewing pumping at work as a milk production endeavor — Noah drank formula when he was away from me and there really wasn’t anything else to do. I kept pumping just to keep my boobs from drying up completely so we could continue to breastfeed at home. When Noah weaned after a couple months of this, one of my very first thoughts was something along the lines of “oh thank goodness, I don’t have to pump anymore.” I boxed every breastfeeding accessory I owned and donated some and tossed the rest. I was done. I was never doing that to myself again. If breastfeeding didn’t work the second time, I would give myself permission to stop and not torture myself with the pump.

I did rent the Medela Symphony again, pledging to at least do whatever I could at first to combat potential supply problems. I pumped for 10 to 15 minutes after every feeding, essentially tricking my body into thinking I’d had twins. And oh, how the milk flowed this time! Ounces and ounces of it! A quick sniff of Ezra’s laundry or the sound of a running sink faucet was enough to trigger an enormously powerful letdown reflex. Instead of hunching over the wheezing machine and feeling sorry for myself, I was filled with awe and pride at what my boobs were doing this time. I’d bring multiple full storage bags down to our refrigerator and show them off to Jason, like: DUDE. LOOK WHAT I CAN DO.

Once it was clear that I’d veered into oversupply territory, I returned my rental and bought both a Pump-in-Style…AND a Medela Harmony manual pump (which worked great for relieving engorgement or to prevent poor Ezra from choking on the initial letdown). I didn’t need to return to work, but my fridge and freezer always had enough milk to last a week. Pumping wasn’t a chore as much as a ticket to convenience…and a little freedom. Date nights. A solo shopping trip while Jason stayed home. An extra sanity-saving bottle in the diaper bag in case we got stuck in traffic or otherwise off schedule.
After awhile, though, my supply dipped as Ezra slept longer and nursed less, and the pump was the first thing to go. I suddenly couldn’t get anything anymore, maybe an ounce here or there. I was actually kind of bummed. Then Ezra started rejecting pumped milk anyway, so I boxed the pumps up and stuck them in a closet.

I never really thought about how my pumping experiences were just as drastically different as my actual nursing experiences, but they were. The first time, it’s like I transferred all my frustration and discomfort with nursing and working to that blasted pump, and it rewarded me in kind. The second time, everything was just…fine. Not a big deal at all. Was it me? The baby? More confidence, better technique? Physical? Mental? I have no idea. Sometimes pumping is great, and sometimes it…well, it sucks.

(Weirdly, entirely unrelated: Writing this post [and last week’s] triggered very weird phantom letdown sensations in my boobs. The guy at the table next to me is giving me weird looks because I keep yanking on my bra. Keep it classy, self!)