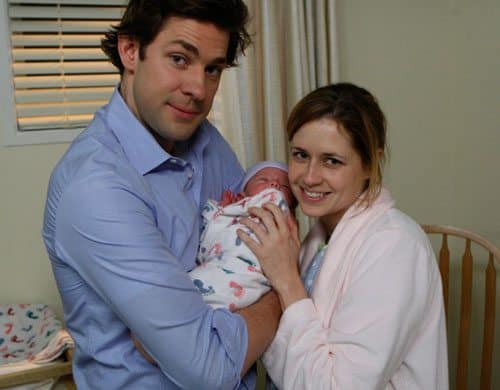 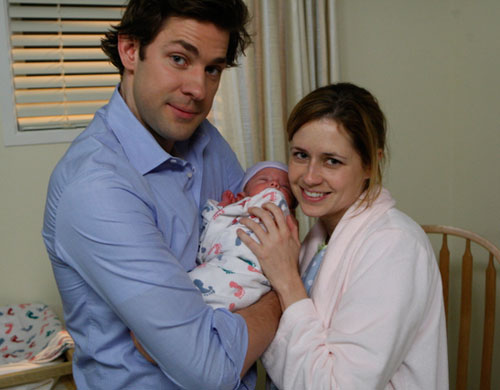 I have written a couple times about how much I hate — nay, truly and forcefully LOATHE — the way pregnancy and birth are depicted on TV and in movies. It usually looks something like this:

Female character’s water breaks at a hilariously inopportune time, without warning or any contractions, usually all over a male character’s shoes. Everyone rushes to the hospital, and by the time they get there the female character is (of course) in active labor and screaming hilariously for drugs. (Bonus hilarity points if the female character ever mentioned a plan to have a natural birth.) The father of the baby is either trapped in an elevator or across town thanks to a wacky series of hilarious circumstances, or whining about the female character squeezing his hand too hard and cursing at him. Non-related male characters accidentally barge into the room and faint and/or vomit at the horrors they witness. A few minutes later, the doctor presents a six-month-old covered in Vaseline and food coloring to the entire cast. The baby’s name is probably the one you picked out for your own baby, which means you have to start over because people will think you copied. The female character gets the world’s largest hospital room, capable of handling unlimited visitors, and she drops all the baby weight in a matter of hours and spends exactly one scene dealing with the indignity of slightly frizzy hair to indicate what she just went through.

Then they all go home and the baby spends the rest of the series asleep in its crib off camera.

So…I was really genuinely surprised that of all TV shows, The Office got childbirth and its aftermath almost completely right.

If you haven’t seen it, the two-part episode is available right now at Hulu. Part one is here, and here’s part two. The first part, the one with the actual birth, is worth watching, for a few reasons:

1. The labor details are more or less accurate. Pam has contractions that slowly build in frequency and intensity. Her water breaks after she’s already in active labor. (It can certainly happen the other way around, but it’s much more common for the water to break after contractions have started.) And the breakage simply requires a wardrobe change, not a mop and a haz-mat crew.

2. Pam’s reactions to labor are sweetly believable. She stays at the office past the 5-7 minute point because she doesn’t want to check into the hospital until midnight so she can maximize her HMO’s stingy hospital stay coverage. And once it seems like she’s getting a little ridiculous in this sticking point, she reveals that actually, she’s mostly just really scared.

3. The delivery is off-camera. Sure, Michael does the cliched burst-into-the-delivery-room gag and there’s plenty of screaming, but it’s by far the least eye-rolly of television birth scenes I’ve seen.

But the reason I’m really writing about a stupid TV show is because of the second part. The baby (an actual newborn!) is born, but the camera stays with Jim and Pam throughout their hospital stay, and oh, it was eerily accurate. Hospital birth in America? The Office is onto you. Pam wants to breastfeed, but has trouble getting her baby to latch and receives less than enthusiastic support from the hospital staff. Her nurse keeps pushing formula while Pam’s frustration mounts and her heart breaks. The nurse rolls her eyes when Pam worries about nipple confusion and generally does little to support her desire to nurse. Pam gets a roommate (for whom everything is going just SWIMMINGLY) and she and Jim crowd together on her hospital bed, terrified of the ticking countdown to their coming discharge time.

There’s of course, typical sitcom stuff (a male lactation consultant; Jim grabs their roommate’s baby in a sleep-deprived haze and Pam nurses it by accident), but even that was kind of daring — both for the taboo of nursing another woman’s child and the heavens not crashing down, but also the act makes Pam realize that her baby doesn’t latch like that baby. (What have I said, over and over and over again? Babies know how to suck, not latch, and it’s not YOUR FAULT if everything doesn’t work like clockwork at first.)

Jim and Pam’s fear of a short two-night hospital stay was a framing device across both parts, and they fight it until the very last minute. But it isn’t until they leave the hospital (or, more accurately, Pam is unceremoniously dumped on a bench outside because the wheelchair and nurse are needed elsewhere), that things actually improve. The baby cries and Pam reaches into her bag — and my heart clenched because I was sure she was reaching for a bottle, having been convinced to give up — and grabs her nursing cover. The baby latches and nurses in earnest just as Jim returns with the car and he beams with pride, and waves of relief wash over them both. They can do it. They can do this.

I’m getting chills just thinking about it. It! A SITCOM. And not a particularly sentimental sitcom at that. And yet when it came to BREASTFEEDING, I’m not sure I’ve seen a better take on the first days postpartum. So…thanks, Office writers and actors, for getting it mostly right, and for not being afraid to show that breastfeeding can be both really really hard and really really worth it.

Photo from the Halpert Baby Blog. That’s right. Pam and Jim’s fictitious baby blog. Um, why aren’t we on their blogroll? Waaah!