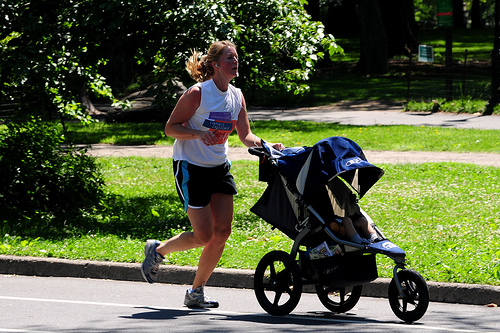 Behold! The long-awaited exercise/getting-back-in-shape entry! My procrastination on this one was epic. Epic and oddly symbolic. Or do I mean ironic? Metaphorical? Similie-ical? Whatever, luckily I managed to snag a few minutes with the much-smarter-than-I-am Linda Sharps, founder and overlord of Bodies in Motivation. She could totally kick your ass, but she’s so damn nice and funny you’d probably enjoy it..

Amalah: Look, I’ve seen your hot self in person. You’ve kicked a ridiculous amount of ass and gotten into (what I’m assuming is) the best shape of your life…AFTER two babies. How did you do it? When did you decide to get serious?

Linda: Shut up. You look stupid-hot and you had a baby like ten minutes ago. So there.

Anyway: you’re right, I really am in the best shape of my life — I’ve spent my entire adult existence carrying around an extra 15 or so pounds, and that number climbed after my first son was born and I spent a year and a half rewarding myself for making it through another day by cramming my food-hole and lying on the couch.

When Riley was around 18 months old I sort of had this moment where I realized I had only a few photos of the two of us because I hated how I looked. I was still slothing around in maternity pants at night. (So comfy! So . . . expandable!) I had no energy. I was in this totally unhealthy food rut I couldn’t see my way out of. I was just…sick of it, I guess.

I signed up with the Weight Watchers website, which was immensely helpful in terms of helping me come to terms with what I was eating, and re-learn some healthier eating habits. I also started doing this goofy exercise DVD called Turbo Jam, and actually kind of enjoyed it — from there I started doing other home workouts. In three months, I had mostly lost the weight, but more importantly, I felt better, I had more confidence, and I actually had MUSCLES. For the first time EVER.

Then I got pregnant again and pigged out on Haagen-Dazs for nine months.

Getting back in the groove was easier the second time around, because I knew what sorts of things worked for me. It took some time, but I re-lost the weight, and in the last year I’ve actually stepped up my fitness routine quite a bit — I see a personal trainer now, I take kickboxing classes, and I just ran my first 5K.

You had a c-section, like me (throws scapel-like gang sign). My doctor told me I could do pretty much any physical activity and exercise after six weeks. I didn’t really feel like that was…um…realistic, particularly after my second surgery. Do you have any ideas for some good “first” exercise routines for a newly postpartum mom?

I’ll tell you what NOT to do: do not decide you’re feeling good enough to embark on a vigorous ab-focused workout only a few weeks after your second C-section, because you might throw out your back so thoroughly during a toddler diaper change (while your newborn is strapped to your chest) that you have to weepingly call your husband at work to come home and help because OH MY GOD YOU ARE DYING.

A much more intelligent and knowledgeable lady than myself, fitness guru Kathleen Donahoe, suggests sticking with exercises where you avoid twisting (because your poor stretched-out ab muscles can separate down the center, a condition known as diastasis recti), and mixing in some getting-your-strength-back moves like lunges, squats, and pushups. A specialized class like postpartum Pilates is a nice option, although not always feasible for everyone.

And on that note, any totally essential things a new mom should have around the house to help with nutrition and exercise?

Hard to say definitively because one person’s “totally essential” is another’s I HATE THIS STUPID THING, but I think if you’re trying to regain fitness as a new mom, DVDs are a great resource. There are any number of postnatal workout DVDs available these days, and even some that incorporate your baby (maybe you…lift them, or something? I’m not sure, to be honest, but the cover photos always make it look like everyone’s all happy and stuff).

The nice thing about home workouts is you don’t have to get dressed, find someone to watch the baby, fret about the fact that your hair hasn’t been washed in two days, etc. I’m a huge huge fan of Jillian Michaels’ 30 Day Shred DVD, which is an awesome little kick-butt workout that you can do in about 20 minutes. Perfect for naptimes! When my second son was little, I’d put him in the swing and jump around in front of the TV while my preschooler was napping. It wasn’t perfect, but it worked.

It’s not easy to fit workouts in as a new mother, but I can’t tell you how much exercise helped me through those early months. Most new moms feel so overwhelmed and stressed and they’re dealing with hormones and the sometimes-miserable feelings of having life turned upside down by the tiny beloved blatting creature who poops and eats all the time, and having that ONE THING you do for yourself, that helps you feel stronger and more capable and more in control…it’s just really, really nice. And fitting back into your favorite jeans is an awesome side effect.

Your second baby was not a good sleeper, TO PUT IT MILDLY. How did you fight the urge to nap or go to bed early and find the resolve to exercise through the sleep deprivation? I tend to start exercise programs and do really well for a few days…then I give myself a night off because I’m tired and the baby woke up three times and waaaaah I’m tired. And then that one night off immediately turns into a month.

The thing about exercise is that the more you do it, the more energy you have. Which, you know, isn’t the easiest thing to keep in mind when you have no energy to begin with, but I don’t think I could have SURVIVED all those sleep-interrupted nights if I hadn’t been working out.

Napping never made me feel better, either. I think there are some people who can conk out for half an hour or so and wake up feeling refreshed, and then there are people who wake up in a puddle of drool, bleary-eyed and stupid. I definitely napped during the first crazy newborn weeks, but after a while I’d ask myself what would make me feel better while the baby was down: a quick workout, or passing out on the couch? No matter how tempting the couch was, the workout always improved my day. As Dylan got older, I started a kind of routine I still stick with today: once he’s in bed for the night, I do my workout right away. Then it’s bedtime for my 3-year-old, and there’s still time for relaxing in front of the TV or going to bed early if I really need to.

I feel like the healthier your body is, the more capable you are of physically dealing with all the challenges and stress of a young baby — not that I ENJOYED getting up four times a night for over a year, or anything, but it didn’t kill me stone cold dead like I’m convinced it would have otherwise.

The baby pouch. You know the one. The squishy thing around your belly button. Does it EVER really go away? If I finally lose the last 10 pounds and do a squagillion crunches, will I at least have something sort-of like my pre-baby stomach again?

Uhhhhhh. Well, I think Jillian Michaels would say yes (and then she’d yell at you not to phone it in) (and tell you to GARGLE YOUR HEART). Me, I think it depends on genetics and post-surgery fat redistribution and luck of the freaking draw.

My personal belly looks pretty good if I’m standing straight up and flexing and also not exhaling, but if I sit down, it puddles in my lap like a wrinkly, deflated pool animal. So.

Judging by the yooooooge number of practically brand-new jogging strollers on Craigslist and eBay, it appears to be one of those things that a lot of people buy and then never actually use. So you have one, use one? Any advice for motivating jogging stroller owners to actually put it to use, or do you have any suggestions for something better they can use the Craigslist proceeds on?

That’s a topic I don’t know much about, because I haven’t used a jogging stroller. I never wanted one, and here’s why:

Some people seem to really love jogging strollers — lord knows I saw enough kid-pushing people galloping past me on the 5K I ran last Sunday. I think if you are into running, and you think you’ll enjoy taking the kiddo out when you’re exercising, why not? Any investment in your health is a good one, in my opinion. Worst case, it goes back on Craigslist and you try something else.

If you landed here but are still pregnant, visit Amalah’s Pregnancy Calendar. You won’t regret it.