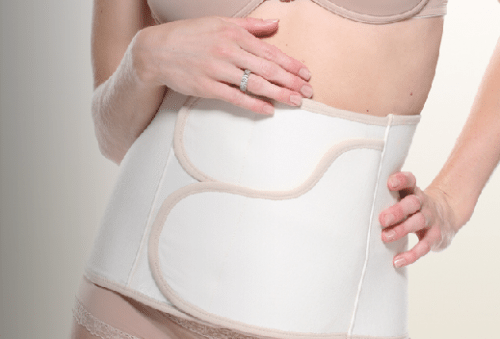 I’ve got another one for you. You’d mentioned you were considering belly binding this time around. I have a scheduled c-section in three weeks and am considering doing it, too. I’ve heard about the benefits not only for waist reduction, but for healing and incision support in the days following the procedure. There are several products out on the market for this and any experience you can share would be helpful.

Where I live abroad only the Belly Bandit has been easy to find, so I’m considering buying one or more comparable products from the US and having them shipped here. Sizing seems rather complicated as I’m already very pregnant and although I haven’t put on a lot of weight, have no idea what my size will be once the kiddo is out.

Tips? Suggestions? Any would be great!

Yes, after some brief consideration, I did indeed do the whole postpartum belly binding thing. And honestly, I am kicking myself for not doing it before.

Why I Decided to Try Belly Binding

I recovered from my first c-section (emergency) pretty easily — or else I’ve simply blocked out any specific memories of being in pain. My recovery from my second (which was scheduled) was much, much harder. Like, seared into my brain harder. I couldn’t get in and out of bed without crazy intense pain, or up and off the couch. I caught a cold and later a sinus infection and would literally sob after every cough and sneeze while ineffectively trying to splint my incision and ab muscles with a pillow. (That was my hospital’s suggestion. Blah.)

And on a completely vain, superficial note, I struggled mightily BOTH times with how very pregnant I looked for several weeks after giving birth. I couldn’t fit into my regular clothes and my now-empty belly had the look and feel of a mound of uncooked bread dough. I know, I know — we’ve all gone bonkers with the HOW I LOST THE BABY WEIGHT AND THEN SOME HERE I AM IN A BIKINI ON THE COVER OF US WEEKLY THREE DAYS LATER celebrity mom culture, but the fact is that I really did feel quite unhappy with how I looked, as completely unrealistic as I was being. But when you’re so newly postpartum and emotional and weepy already — I think you get a pass. And the right to do whatever you need to do to make yourself feel a little better.

And for me, wrapping my midsection up in a fancy combo of elastic and velcro helped. A lot, actually.

The Scoop on Belly Binders

I bought two binders (oh fine, GIRDLES): One expensive one (the Belly Bandit BFF for $79 online) and a cheaper one (a basic Medela Postpartum Support band for $19.99 at the local Big Box Baby Store). I got two mostly for compare/contrast purposes as I JUST KNEW I would get asked to talk about them online, JUST A HUNCH, but also so I could have a back-up while washing and air-drying the other.

To figure out my size, I measured my belly circumference in the eighth month as recommended for the Bandit and was at the very, very top of the range for the small size, but went with that rather than the next size up. I bought the Medela in the Small/Medium size, guessing at that one kind of blindly. (Pre-pregnancy, for reference, I buy clothes in small or size 4/6. So if you are still confused after measuring your belly, you may want to use your pre-pregnancy size for extra guidance.) 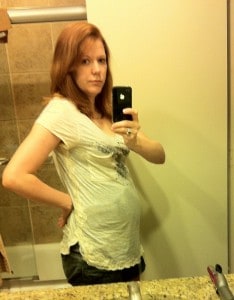 I did not, as the product instructions suggested, put one on the very day of giving birth. Mostly because the nurses at the hospital came by routinely to check my belly and I felt…kinda silly at the thought of having to take off mah girdle in order for them to do so. I put on the Belly Bandit the day I was released, once I got dressed in my own clothes to go home. I just BARELY was able to get it on, but I could, by laying on top of it in bed and sucking in and pulling it closed.

And honestly, I was SHOCKED at what a difference in made for my poor traumatized ab muscles. Rather than feeling like I was wearing some kind of medieval torture garment, I felt actually comfortable for the first time, with my skin and muscles pulled back in to something sort of resembling their original position. I could sit down and stand up! I could cough! Move around! Oh, glory be.

I wore the Bandit 24 hours a day from then on. Here I am the day after being discharged, at five days postpartum. You can see the outline of the band since my shirt is kinda flimsy, but I am wearing (slightly generously roomy) non-maternity clothing.

I tried out the Medela when the Bandit needed to be washed, and…yeah. Not so much luck with this one. After the Bandit, the Medela didn’t feel nearly as tight and binding, and there wasn’t enough velcro for me to be able to bind tightly and not have a lot of extra inches of the band just sort of…hanging there, with no more velcro to fasten the end to. So it was super extra visible and lumpy under my clothes and tended to slip and slide and move out of place a lot. (It’s made from a weirdly slippery material.) I wore it at night a couple times, but after having the Bandit as a point of reference, there just wasn’t any comparison.

Not that the Belly Bandit BFF is perfect. I actually wish I’d seen these particular reviews at Amazon before purchasing the so-called improved (and more expensive) version of the original Bandit, because I can echo most of those complaints. After a month of heavy wearing, the Bandit BFF developed a slew of very deep creases that could not be undone, even after washing and ironing. Their website claims this is normal and doesn’t affect the product’s compression, but the creases definitely affect the fit. It’s already on the narrow side, and once it “bunched up” permanently from the creases, it became a LOT less comfortable to wear. Now, two months postpartum, it hits me in weird places on my torso, creating a slight muffin-top effect under my rib cage and then is too short to adequately cover the full…uh…target poochy area below. The last time I wore it to bed, I woke up with vicious red marks where the edges and seams had bunched up and rubbed me the wrong way. It’s a shame, because I can still get a good binding effect from it, even though I’m at the faaaar end of the velcro, but it just no longer stays put or is possible to wear inconspicuously under most summery clothing.

I don’t regret the purchase — it helped immeasurably with my pain and discomfort from the surgery, and got me back into regular clothing almost immediately. I don’t know if it necessarily helped me get “skinnier” than I would have been without it (I still most definitely have my little perma-pouch), but it at least provided a very much appreciated ILLUSION of being skinnier. (Not gonna lie, taking it off for the first time reminded me waaaay too much of an image of an exploding can of biscuit dough, if you know what I am saying.) But then after a couple days of wear, my stomach really did look better after I took it off — my skin held its shape, my jacked-up belly button was more or less where it was supposed to be, and my stretch marks looked much less noticeable. I felt GREAT in that thing, in more ways than one.

I just wish I could have kept wearing it longer, especially considering the hefty price tag. Hell, I’d love to still be wearing it, even though I’m more than recovered from the surgery. But it’s pretty much back to Spanx for slimming/smoothing purposes at this point. So I guess my experience says: big YES to postpartum girdles after c-sections, no to completely cheaping out on them, but also no to just buying the most expensive option out there too, since these things do have a fairly limited window of use.