The “Body After Baby!” Hype Machine 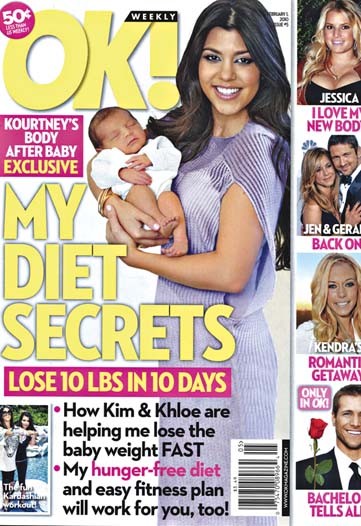 All I have today is a rant.

I am really, really sick of those stupid “BODY AFTER BABY” tabloid covers. Particularly as they’ve gotten more and more insane — it’s no longer enough for a woman to debut a slimmed-down figure a mere six months postpartum, I mean, OBVIOUSLY we’ve all completely forgotten that she even HAD a baby by that point. No, now everyone is rushing to get these covers out within weeks.

OK! Magazine had Kendra Wilkinson on their cover TWO WEEKS POSTPARTUM (albeit with a tiny, slightly convex belly) talking about her exercise routine. And since Kendra had a c-section, this was a good FOUR WEEKS before she would have even been officially cleared to safely exercise.

Now OK! has been outed as completely faking and Photoshopping their latest “exclusive” post-baby body cover, which features a photo of Kourtney Kardashian, said to have been taken a mere seven days after her baby’s birth (and I just had to check her first name twice, because I have no idea which Kardashian is which). Her belly is flat as a pancake, and the accompanying headlines are full of promises to reveal her “secrets” and “hunger-free diet.” If she can do it, so can you. So why can’t you?

Spoiler Alert: This Body Has Been Photoshopped

Turns out, though, that OK! yanked the photo from a rival Life & Style shoot and simply altered it to hell. Kourtney tweeted about the OK! photo, rightfully insulted: “One of those weeklies got it wrong again…they didn’t have an exclusive with me. And I gained 40 pounds while pregs, not 26…But thanks!” She then told WWD: “They doctored and Photoshopped my body to make it look like I have already lost all the weight, which I have not.”

The original WAS taken one week postpartum, but as you can see below, Kourtney actually dares to sport a stomach that possibly looks like maybe an entire human being resided there AT SOME POINT in the recent past. 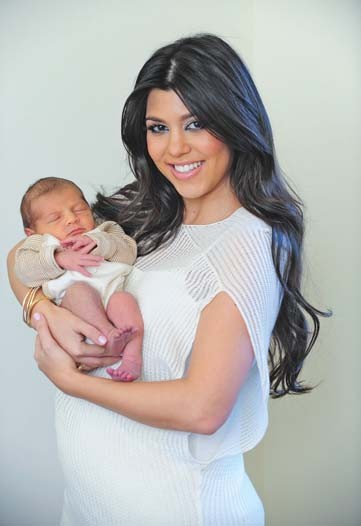 I may be slightly unclear who exactly this woman is and why we should all hold ourselves up to her postpartum example, but I think she looks lovely in the original photo. (And who knows? Maybe that one’s been altered too. Maybe there is no original. LOGIC WORMHOLE AHHHHH.) The OK! cover is a such a crappy Photoshopping job to begin with, so it’s like, quadrupably insulting that they honestly expect their readers to look at that cover and see something to aspire to. “Yes! I want to look like a cardboard cutout of a bobblehead! As soon as possible!”

But we are, apparently, supposed to do whatever we possibly can to slim down as fast as we possibly can. C-sections or not. Breastfeeding or not. Sleep or not. Healthy or not. And oh! If you think this is just the number on the scale, well, you’re still not being hard enough on yourself. What you’re really after is your PRE-BABY BODY. Everything back to exactly the way it was before you underwent one of the most profound, life-changing experiences in the world. Your stomach ought to snap back like a rubber band, your breasts should never soften or droop, your hips should not widen or cellulite appear.

Hell, Octomom is prancing around in a bikini on the cover of Star Magazine — she got a whole year to slim down, but she had EIGHT BABIES. And she thinks any type of surgery is “cheating” and swears that she managed to magically erase her stretch marks, despite the fact that 1) we all saw that she had them, and 2) THERE IS NO WAY TO MAGICALLY ERASE STRETCH MARKS. They fade, sure. They don’t disappear. (Unless Photoshop has a cosmetics line now. I’ll take some under-eye concealer in about a +3 Gaussian blur.)

I suppose it’s kind of pointless to rail online about this and beg magazine publishers to knock this crap off, but…in case you’ve ever been tempted by those “diet-secret” headlines, or mournfully regarded your stretch marks, or even wondered what’s “wrong” with you and your completely and permanently altered post-baby body, put down the weekly rag and go to theshapeofamother.com. This is what women look like, OK! Okay? Good.