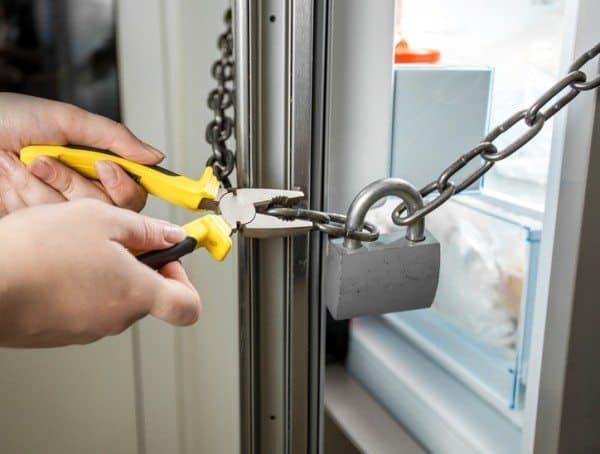 Four months ago I gave birth to a beautiful baby boy whom I love dearly. Unfortunately, pregnancy left me with extra baby weight, which I do not love dearly. It has made me feel uncomfortable about my body, so I decided to get serious about losing the rest of the weight at the beginning of the year (because that’s what we do, right?), and started a diet. I enjoy eating healthily and am loving the extra energy I have, but my diet is causing problems in my marriage. My husband is the very thin, can-eat-anything-he-wants-and-will-still-lose-weight type and he has taken it upon himself to ensure that every calorie that passes my lips is accounted for. I’m nursing a baby, so I am hungry more often than he understands and he has accused me several times of “eating all day long.” When I walk to the kitchen he asks me what I’m doing and tries to talk me out of eating. Even grabbing a quick snack unleashes a lecture on the sorry state of my physical health. It is making me crazy. I tried rationally explaining that his food-shaming is hurtful and unhealthy and when that didn’t work I tried crying and screaming that his food-shaming is hurtful and unhealthy. Still, he carries on with his self-appointed mission to make me lose weight. I love him and know that he means well, but I swear that if he doesn’t stop I might just beat him to death with my juicer (that he bought me – go figure). How can I explain that the way he acts about how I eat is inappropriate? Please help.

Desperate for a Respite

FLAMES ON THE SIDE OF MY FACE.

You had a baby four months ago. You are nursing. You are married to a jerk.

I mean, I’m sure he’s great and all and you love him, but this is ridiculous. You asked “how can I explain that the way he acts about how I eat is inappropriate” but I highly doubt there’s a script I could write that would get through to him. Because you’ve ALREADY explained it. Once rationally, and once in TEARS. And — call me old-fashioned and/or crazy — if you have actively driven the person you love to TEARS, and yet CONTINUE to actively engage in the same pattern of behavior that made them cry…that crosses a line into abusive.

I don’t care that he means well. He’s being controlling and obsessive and cruel. YOU JUST HAD A BABY. YOU ARE NURSING A BABY. You are a human being who needs calories to function (and 500 EXTRA calories to nurse). Weight loss should not be a priority here, for you and DEFINITELY not for him, because it’s not his damn body.

(Random aside: While many women love going on and on about the weight-loss benefits of breastfeeding, many MORE women anecdotally report that their bodies hold onto extra weight [10 pounds is what I’ve typically heard, though I’m sure it varies] that never budges until the baby weans. The more you know!)

It’s not a difficult concept for someone to grasp (especially after having been told) (twice!) that, “Hmm, my well-intentioned efforts to support my spouse in her diet and weight-loss goals do not seem to be helping, but instead seem to be actively making her unhappy and/or sending her the message that I’m grossed out by her post-baby body. Perhaps I should back off.” Since he cannot grasp that concept, I admit that I’m less than willing to give him the “but he MEANS well” pass. He’s got a great metabolism and superiority complex. And probably some hidden food issues of his own, mixed in with unrealistic expectations re: post-baby bodies.

Part of me wants to tell you to walk into the kitchen right now and just like, stare him right in the eyes while shoving an entire chocolate cupcake into your mouth in one big, spiteful bite.

But I won’t, because that’s not how grown-ups are supposed to handle things like this. Personally, I think you guys should probably consider taking this to a third party, someone who can also explain that yes, DUDE, the food-shaming is hurtful, unhealthy, and completely counterproductive. A couples counselor would be one option, especially if he’s ever shown these controlling-type tendencies about other aspects of your life or physical appearance. If you can think of any other instances that, hmmm, maybe suggest a pattern, insist he come to counseling because that pattern needs to stop NOW.

If this really truly is the one sole issue he’s decided to be a complete (but so well meaning!!) jerk about, I’d suggest hiring yourself a personal trainer. (Hey, I bet your husband would totally spring for the expense since it’s so IMPORTANT.) Preferably one who specializes in post-pregnancy weight loss. Maybe find a dietician or nutritionist. And then these people — AND ONLY THESE PEOPLE — are the ones who get any say in your diet/exercise plan and are the only people you need to be accountable to, besides yourself. Tell him this. You’ve absolutely had it with him and his self-appointed mission and it’s done and over.

If he continues to harass you in the kitchen or try to inventory your food intake or basically be the world’s most obnoxious calorie counting app, tell him it’s time for some counseling. If he really can’t see/understand what this behavior is doing to you (and your marriage), then this is a real problem, and one that might not magically go away once you hit the “right” number on the scale.