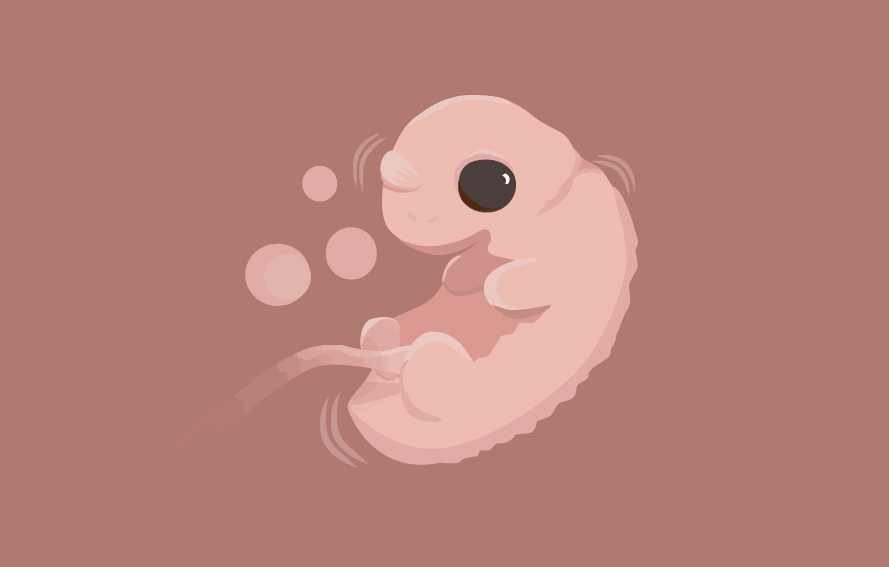 If you are “lucky” enough to score an ultrasound this week, you’ll probably be able to see your baby’s heartbeat. It’s ridiculously exciting, considering it mostly looks like some flickering pixels on a TV with really crappy reception. After seeing the heartbeat, your risk of miscarriage shoots down to 10 to 15%. It’s not as great as getting out of the double-digits (at 10 weeks your risk is only 3%), but still. In the crapshoot of fertility, take the sighs of relief whenever you can get them.

I saw my own little Quasimobryo’s heartbeat on Monday, and pumped my fists in the air and told my husband to get my toddler’s giant melon head out of the way of the screen. My doctor attempted to get a better idea of the baby’s gestational age by measuring the head-to-rump length (which in these early days is more like “head-like-bulge-to-tail-like-tadpole-bottom), but came up with a measurement of only 5 weeks, 6 days.

I’ve decided to go ahead and ignore this age, because 1) it would be very, VERY unlikely to see a strong, obvious heartbeat at that age, 2) ultrasound measurements are very, VERY unreliable, particularly early on, and 3) I don’t want to believe I am going to be pregnant for that many more weeks.

So I’m sticking with my earlier hunch that I am six full weeks along and closing in on week seven. Take THAT, science! You can’t make me believe things I don’t want to believe!

And for those of you who are not me, and therefore probably aren’t nearly as interested in my Gestational Age of Mystery, may I just encourage y’all to take it easy? During my first pregnancy, I actually tried to fight my symptoms. No naps! Naps are for the weak! No junk food even though oh my God it would taste so good and be the edible equivalent to getting someone to scratch that one itch right in the middle of your back where you can’t reach…oh…ahhh. No! You eat salad and healthy grilled chicken! (Even though: chicken! Ew! Puke!) No Tylenol no matter how much your head hurts! Sack up, little camper!

Try to rest. You aren’t lazy or out of shape — you’re pregnant and there’s just no fighting this fatigue. Try to eat what will stay down with the least amount of discomfort. Pay attention to your fiber intake (trust me, you don’t want to add hemorrhoids to your first-trimester woes) and don’t freak out if you had a tad less Folic Acid today than yesterday. Extra orange juice is a noble idea, but not if it’s causing you fetal-position-type heartburn. I remember trying to act specifically NOT pregnant at work during the first trimester, but there definitely comes a time to cry uncle, eat the box of powdered donuts and then ask your boss if you can leave an hour early so you can go home and take a nap.

Oh Yeah, THIS: I miss pooping. That is all.

New This Time Around: I’m freaking itchy. All the time. My skin doesn’t look or feel particularly dry, but MY GOD IT ITCHES. And when I scratch, I give myself welts and hives. And yet, I scratch. I sat in a friend’s living room this weekend and scratched and scratched and scratched at my upper arms because it was driving me out of my mind and finally she asked if I had a rash or a bug bite or just some wicked cocaine withdrawal symptoms because MY GOD STOP SCRATCHING.

Surprise! It’s yet another common symptom of pregnancy. Pruritus gravidarum, if you want to be all technical about it. Nearly 20% of pregnant women suffer from it — most often in the third trimester, but it can occur at any time. I’m proof! Cooling lotions with menthol and camphor are the best treatment, although antihistamines can be brought in for really severe, going-to-lose-my-mind-or-claw-my-skin-off cases.