I’ve just got done reading your early potty training advice column and am at home for the fifth day in a row with my sickly three year old. So I’m perhaps not in the best frame of mind to be dealing with her training issues as they stand. Being all full of the cabin fever does not a happy mother make. But, because I appreciate the advice you give, I’m going there.

My daughter turned three a couple of weeks ago. She has little to no interest in toilet training. She will not sit on the toilet when offered, unless as a delay tactic for bed or as a means to trick me into believing she will ever use a toilet like a big girl. She will not go commando, or wear underwear. So it is nappies all the time.

She is capable of weeing on the toilet and has done so on different occasions, to much praise and enthusiasm from her father and me. She has even stopped mid wee and waited to finish it on the toilet, should it happen during bathtime for example.

When we talk about what big kids do and ask if she is a big kid, she is both adamant that she is and that big kids use the toilet. But when it comes to walking the walk, or weeing the wee, it doesn’t happen.

I know it’s wrong to compare kids because they all develop differently etc. But we were recently visiting family in Australia (we live in Sweden) and my cousin’s just turned two year old is already toilet trained. All my mother’s group kids are trained. Only my munchkin is way behind the rest.

I guess my question is, what do you do with a stubborn kid who refuses to sit when the opportunity is offered? Just wait until she asks to go? Is there anything I can do to help rather than waiting for her to ask to go to the toilet? I don’t want to be perpetually asking her if she wants to go. But I don’t want to do nothing either.

My cabin fevered brain is feeling somewhat like a failure as a parent because I cannot work out how to get madam to use the toilet, to want to use the toilet. We have encouraged and offered and talked it up. But still nothing. (And we started talking it up last summer, so since June 2013)

Tell me that she will eventually train. Tell me that we aren’t doing it entirely wrong. And please let me know what we can do from here. Every bit of advice I’ve read is pretty much sit a child on a toilet at regular intervals when you have them at home and praise them effusively for success. But she just won’t sit there, and is a determined child.

Thanks for reading the whinge from a cooped up Aussie living in Sweden.

Ah yes, dispatches from the OTHER end of the potty-training spectrum. A perfectly-capable but stubborn-beyond-all-comprehension 3 year old. And 3-year-old stubbornness is pretty much the worst kind of stubbornness. Epic peak stubbornness, and I speak from experience.

(My youngest turns 3 in two months. It’s all already coming back to me — so stubborn! so irrational! much no, very argument, such screaming, wow! — and it’s more than solidifying our decision to not have any more children. I would have babies constantly, if I could, but I am simply done having 3 year olds, you guys.)

So here’s what you do:

2) Get rid of the diapers. All of them. Hide them. Toss them. Donate them. Whatever.

4) Find an incentive. Make it big, make it serious. It can be something new (you’ll take her somewhere super special, or you’ll buy her a specific thing), OR it can be a privilege that will go away until until she uses the potty (no TV, no more of a specific DVD/activity/food treat, etc.).

Tell her the day before that it’s time to say goodbye to diapers, and hello to underwear. Starting tomorrow, there will be no more diapers. Full stop! Not up for debate! It’s honestly not even Mommy’s decision! It just is what it is! But it’s going to be okay and you know she can do it, and if she uses the potty [big awesome incentive] will happen! Yay! I can’t wait for tomorrow and to say hello to underwear! Ignore any arguments or protests because it’s not up for discussion — basically imagine she’s arguing that she wants to go outside even though it’s raining. Nope. Not gonna happen.

The next morning, it begins.

The trickiest part is actually number 4 — if you can hit on the right incentive at the right time, steps 1 – 3 can be blasted through in less than a day or two, at this age. But the opposite can happen if you offer something they just don’t care that much about (or is too abstract of an idea — try to find a picture of whatever it is and hang it up by the potty). If you take away an existing privilege (like no TV/screen time), you’ll likely be “tested” for awhile before they get that you’re really super serious about it, and oh yes, there will be epic tantrums. So maybe I should include step 4a, which is to apply a liberal dose of wine and earplugs.

But yes, you’re going to have to go cold turkey on diapers. If she even senses that they’re an option, she will remain entirely unmotivated. Her “I’m a big girl and big girls use the potty” repetition is meaningless, as diapers aren’t a source of embarrassment for her, or holding her back from doing/getting something awesome. She doesn’t care…yet, anyway. The trick is to make her care.

And she might care about constantly having accidents — particularly if she’s expected to stop what she’s doing and clean the mess up. Make her take her own wet clothes off and walk them to the hamper. Make her put clean clothes back on. Make her mop up the puddle with a towel, dispose of the towel, wash her hands. EVERY. TIME. (You obviously go back and clean up properly, but she should go through the full motions.)

This might feel like you’re setting her up to fail, but by maintaining the right attitude — super calm, matter-of-fact, absolutely NO anger/scolding/shame — you are simply giving her full control over the situation. (Control that she already has, honestly, but just not in the way you want.) When we say goodbye to diapers, this is what happens. When you feel like you gotta go, you gotta sit on the potty. When you go on the floor, we have to clean it up. And dude, we can do this ALL DAY. This is all we’ve got on going on today, and tomorrow. And the day after that. Over and over. Or you can just sit on the potty and get [big awesome incentive] instead. You’re totally in charge here.

(Aside, on the whole “but what about naps and bedtime before we’ve had any success” question. The cold-turkey boot-camp approach books and articles I’ve read are all pretty adamant that you shouldn’t revert to diapers AT ALL once you’ve started, particularly with older children. I’ve always ignored that since I didn’t believe my kids were physically ready to stay dry while sleeping at 2/2.5, as it’s a separate developmental thing and generally happens later for boys. We usually skipped naps entirely for the first couple days to avoid messing up any shred of momentum, and then emphasized that diapers were ONLY for bedtime. You want a diaper? You go to bed. This isn’t necessarily a perfect approach either — it can set up issues with kids “holding” in number two when they know a diaper is coming at a specific time of day and prolongs that aspect of training. So if you think your daughter is physically mature enough and have the nerves to deal with a bed-wetting incident or two, feel free to buy a really good mattress protector and go SUPER cold turkey.)

Don’t ask if she has to use the potty at first. You’re going to hear “no” every darn time and it’s going to be a bald-faced LIE at least 50% of the time. Set a timer — every 25 minutes if you’re pumping her full of liquids, 45 minutes otherwise — and when the timer goes off pick her up and physically take her to the potty. Set another timer (5 minutes or so) and tell her she can’t get up until it sounds. Sit on a stool in front of her and prevent her from getting off, keeping your hands on her if you have to. Obviously you don’t want to get into a wrestling match with her so do whatever you can to make it pleasant — books, songs, funny games, a small drink of chocolate milk, whatever.

(If she’s into Elmo, I used an app called Elmo Calls for my youngest — Elmo would “call” him on my phone and a short video would play while Elmo “talked” to him. There was a 99-cent add-on package of calls related to potty training, so Elmo would cheer him on and encourage him to keep trying. Magic!)

If — by the miracle Grabthar’s Hammer — she actually pees in the potty during one of these sessions, make a huge freaking deal out of it. Call Daddy or Grandma on the phone. Reward her with something small and fun, immediately. If your main incentive is something that you don’t want to give her until she’s more consistent, let her put a sticker or magnet on a chart. (Something simple and visual with like, five boxes in a row with a picture of her prize at the end.)

Since you’ve had successes already and she’s clearly familiar with the whole potty concept, I am actually VERY optimistic that your daughter will respond pretty quickly — hopefully within a day or two. She’ll go to the potty on her own, without prompting from you and that’ll be the moment when Everything Changes For The Better. I really think it’s the diapers and lack of a clear, super-desirable incentive that are holding her back at this point. You’ve tried presenting the potty as something desirable in and of itself — it’s what big kids use! it’s great! it makes Mommy and Daddy so happy and proud of you! — and she’s basically been like, “yeah, no, pass. I’ll stick with what I know.” By adding a really cool incentive/goal to the proceedings and while simultaneously removing any idea that the potty is optional, you’ll hopefully break through her current stubbornness and actually get her motivated.

She absolutely WILL train — all kids do, I swear. It’s possible that you can ignore everything I’ve said so far and she’ll still wake up one morning and decide to use the potty like a rational human being all on her own. But there are kids who just don’t come to that magical eureka moment without help. And if you suspect your daughter might be one of them, I do have to warn you that kids don’t necessarily get any LESS stubborn and determined at 3 and a half. (Oh lord, have mercy on us both.) 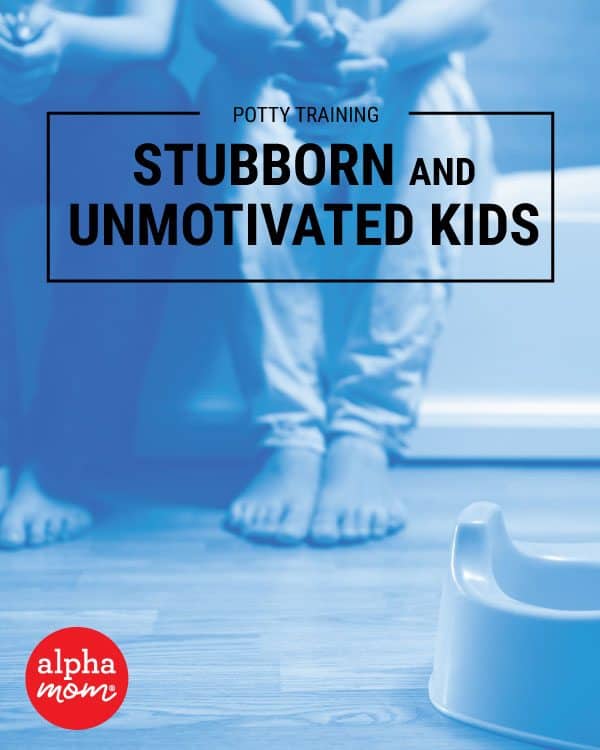