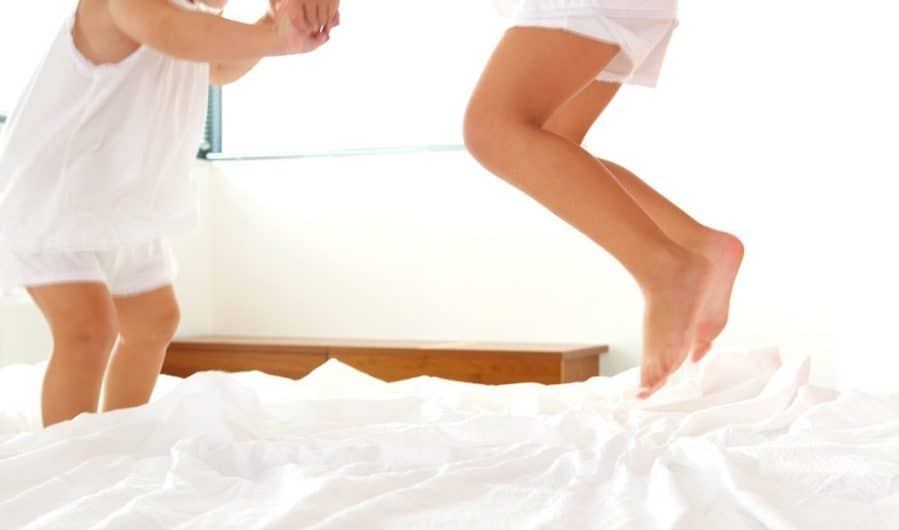 I liked your comments about when you put two kids together in the same bedroom. I think all you said is valid and sweet. We haven’t done that on vacation nor in the house. Currently we have a 1½ year old boy and a 3½ year old girl. We have only vacationed a few times and have either gotten each of them their own room for vacations or when my husband didn’t come to my parents I kept my 3½ year old with me on a cot and the 1½ year old in his own room in a travel crib.

We have been afraid of them waking each other up and so on. Are there any tips to aid this during a vacation? I think we would love to start putting the kids together in their own room because it’s sweet and secondly to save money. Any tips would be greatly appreciated. Thanks in advance.

For reference, my previous columns on the two kids / one room topic can be found here and here. They’re a touch dated from a personal perspective — we have since moved to a bigger house and initially gave each of our three boys their own room. Before long, our youngest started sneaking into our middle son’s room at night to sleep on the floor, then into his bed. After awhile, we gave up on even having him start the night in his own room and now (two years later, at ages 6 and 9), they are officially permanent roommates and have no desire to go back to separate bedrooms. (Well, SOMETIMES my 9yo threatens to take his room back when his brother makes a spectacular mess or otherwise bugs him too much, but these are empty threats and we all know it.) We lost our bunk bed hardware in the move so they still share a double bed, and I often find them sound asleep and snuggled up like puppies together when I check in on them later at night.

So basically, I’m still a huge fan of siblings sharing a bedroom. Both at home and on vacation, because good lord, I can’t imagine trying to procure a vacation rental or hotel suite big enough to give three children their own rooms. Or even beds! We’ve even made them triple-up on a pull-out sofa or queen-sized bed more than…well, a lot of times. They also don’t get their own rooms at their grandparents’ house, but get to choose between a combination of pull-out couches and air mattresses where everybody is still pretty much on top of each other.

Humans are social creatures, and small humans in particular love companionship and being in close proximity to their family.

The best way to do it is just to DO IT. Try it out on your next vacation. Put ’em in the same room and see what happens. They might keep each other up, they might tune each other out, they might do a combination of both. If your 3½ year old did okay sleeping on a cot in your room (or did okay sleeping in other new/strange/different rooms on previous vacations), she’ll probably do just fine in a room with her brother. Kids are remarkably flexible at these ages, so I think you should just take the plunge and try it out.

As I wrote previously, if you make the switch at home and suddenly find yourself policing them too much or going up to scold at every sound of talking/singing/giggling — try to relax and give them space to figure it out and settle down on their own. They might be delighted or distracted by the novelty of the new arrangement, and that’s okay. If you plan (or even hope to plan) on long-term bedroom sharing, I think it’s actually really important to let them sort of…sleep-train themselves as they adjust to the presence of another fun/amusing person in their room. Just keep yourself OUT of the room as much as possible (barring safety concerns) so you don’t fall into the trap of “we act up, Mommy comes and gives us attention even if it’s negative attention WHEEEEE.”

Since your youngest is still in a crib, there’s probably minimal actual “trouble” they could get into, though it never hurts to use a video baby monitor in case you’re afraid he’s close to climbing out or of your daughter climbing in. That way you can go intervene if absolutely necessary (and I was always a fan of yelling “GET BACK IN BED” from outside the door, omniscient-style, while my children were like, “OMG HOW DID SHE KNOW” before scurrying back under the covers), but again, don’t stress over a little restless sibling time after lights out. Let your daughter know it’s okay to sing or “read” to her brother if she wants to; maybe add in a white noise machine in case you’re worried about his nighttime wakings (if any) bothering her.

Humans are social creatures, and small humans in particular love companionship and being in close proximity to their family. They may want or demand their own space later (which is totally fine and healthy), but for now, I’d just go ahead and give room-sharing a shot. Or at least start setting the expectation that travel and vacations = closer quarters than at home.

I would probably recommend starting the transition at home instead of when you’re on vacation. We had our first two share a room for the first time on a vacation (probably 1.5 years and 3.5 years old or so) and it was rough : By the end of the vacation they’d gotten much better, but my hubby and I were pretty wiped out and it was hard to be worrying about them bothering each other AND worrying about bothering people next to or below is in the condo we rented. They ended up sharing a room for a number of… Read more »

Super good college dorm room prep to get used to sleeping with other people in the room and noise. Also good preparation for marriage. It might sound silly to be thinking about that with toddlers. But the younger they get used to it, the better/flexible sleep habits they will have for life.

I have two girls (5.5 and 1.5) and they’ve shared a room for the last 10-12 months even though they could each have their own room. It works well for us. The baby goes down first, then the oldest goes to bed 20-60+ minutes after. You’ll find that once the kids have been asleep for 15 minutes or so, they’re solidly asleep and will not wake up unless there is REALLY loud or sustained noise. I think they’ve woken each other up less than 5 times total, and it wasn’t a big deal to just put them back to bed.… Read more »

My kids (girls, 7 and 5) have shared a room since the little one was born (and most nights insist on sharing a tiny twin bed, as well). It’s wonderful! There is definitely a good amount of singing, talking, hysterical laughter, etc. before they fall asleep, but it’s terribly sweet, does not requite parental intervention, and they do eventually pass out. You might consider moving bedtime up a little bit, to allow for sibling shenanigans and still have kids falling asleep at a reasonable time. You might also want to limit what’s available in the room to fuel said shenanigans…we… Read more »

I wish we had worked through this situation when our kids were younger! We have a 5 year old boy an 8 year old girl and they have always had their own rooms. Both are perfect angels at going to sleep on vacation… if they are alone in a room with door shut. Once they are asleep we can move one in with the other and there are no problems for the rest of the night. However if they are in same room to fall asleep it’s just a circus of bugging each other, escalating to screaming, crying, etc. Has… Read more »

Good use of headphones and electronic devices. Separate. If it is the only screen time they get, they will probably be more interested in it than each other.