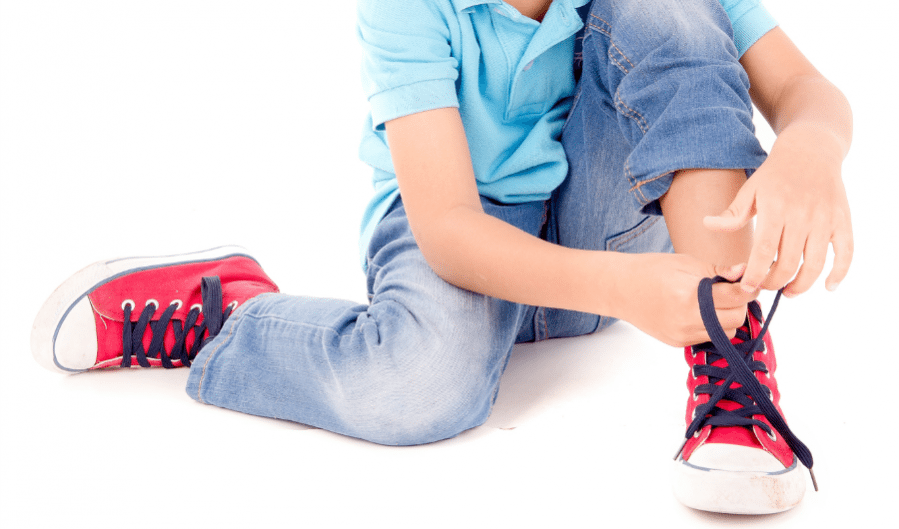 Saw on your personal blog your shoe tying struggle with the boys. I feel your pain. So – when do you give up trying to teach a seven year old how to effectively tie shoes, and just say “Here. Here’s some Lock Laces. Now stop whining.”

My kid is seven. He’s Autistic, but I hate using that as an excuse. He can tie his shoes okay. But not very tight. And we always go back through and double knot them for him, because otherwise his shoe would be untied by the time he got to the bus stop, and there’s ZERO chance he would ever, EVER stop and re-tie his shoe.

He whines and complains every morning about having to waste time tying shoes.

So here’s some things: 1) I feel like just giving up and giving him Lock Laces would be letting him win. And MAN I hate letting that kid win. 2) I feel like knowing how to tie shoes is actually an important skill to have, and if you don’t use that skill you’re going to lose it. Am I right, though? How important IS shoe tying this day and age? There’s certainly other options out there. 3) I feel slightly hypocritical, because I have Lock Laces on my own goddamn sneakers, so I tie almost zero things of my own, unless I am wearing hiking boots.

Help a girl out. Can I give up on the shoe tying thing without feeling guilty that I am denying the kid an important life skill?

Okay, so before I address this letter (and provide an update of my own), here’s an update from the OP on the original shoe-tying post:

An update! Soooo… I sat on everyone’s advice for a few weeks, then decided to bribe the nearly second grader. I told him once he learned to tie his shows and I’d buy him the long coveted “Wubble X.” Usually I won’t buy Crap From TV. After a slight misunderstanding in which he tied a shoe once with help, declared himself learned, demanded his Wubble, and then cried when I said no, we came to an agreement. If he could tie his shoes 25 times by himself, he’d get the prize. I did hand over hand with him a few times and he already knew all the steps except the “through the hole and pull” (that sounds wrong somehow…). Anyway, once he mastered that last little complicated bit, it was done. He did it 6 times in a row right away, and over 50 the next day. He’s worn shoes with laces to school every day since by choice. So, while I have no magic solution, I do have a kid who can tie shoes and a Wubble that popped on the second day. Hooray me!

Meanwhile, I bought the Lock Laces.

Here’s the thing about my particular seven year old (who will be EIGHT by the time this publishes), is that yeah. He CAN tie his shoes. I’ve seen it. I’ve witnessed the magic! Like the New OP’s son, he can’t KEEP them tied, or just won’t. He’ll leave the house in triple knotted shoes and come home with laces flailing. This doesn’t bother him in the slightest. But it’s sloppy, not acceptable for PE class, and not to mention a bit of a safety hazard.

I do think it’s a matter of More Practicing — he’s slow, and still ties them very loosely, and he has zero problem letting his gym teacher/playground aide do it for him. (I know for a fact he tells them he “doesn’t know how” which: LIESSSSSS.)  And I admit I don’t always have the time/patience to make him re-tie his own shoes when we’re out as a family on the weekends.

And so I caved and bought the Lock Laces for his new back-to-school shoes…which ALSO happened to be never-once-worn hand-me-downs from his big brother, who refused to wear them because of the laces. I’ve told myself this concession is NOT the be-all, end-all on learning to tie his shoes, because his big brother DID eventually learn the skill even though we obviously caved with him, too. We put the (really nice) Nike soccer shoes in the hand-me-down box unworn, and bought him an inexpensive Velcro style.

But I do have a plan. My five year old has expressed an interest in shoes with laces and wants to learn how. His friends in Kindergarten are slowly starting to learn and are praised at school about it. They get a big fuss made over their Big Kid Shoes. And while I would characterize my two oldest’s fine motor skills as slightly below average (yeah it’s true), my youngest does NOT share this issue. I don’t see shoe tying as something that will be too difficult for him, especially if he’s motivated. For him, it’ll probably be about the shoes themselves (Toy Story Vans, anyone?), but I’m not going to rule out other incentives/rewards.

And my middle son is actually not a huge fan of the Lock Laces…he finds them difficult to loosen up, he pulls too hard and they get too tight at the bottom, etc. He loves the shoes, the Lock Laces still make my life infinitely easier in the morning…but I catch him defaulting back to an older beat-up Velcro pair when he’s in a hurry. I suspect I just need to re-lace them looser, but then again, this struggle might work in my favor here as well.

If I can get my youngest to work on shoe tying, I KNOW the other one will NOT be okay being the only brother who can’t tie his shoes. He will be LIVID. And probably driven in a way that he just…isn’t, at all, right now. Perhaps, like the OOP, I’ll just need to make a bigger deal out of it, add in a reward and more consistent, regular practice to up his speed and agility.

My oldest is also Autistic, and I did give him a pass on the shoe tying as well. It WAS really difficult for him, and yep, ZERO chance of him even noticing his shoes were untied and a tripping disaster in waiting. He can tie his shoes just fine now…although the untied laces still need to be pointed out to him, but at least he simply drops down to re-tie them without whining and begging someone else to do it. My middle son doesn’t have his brother’s issues, but (shrug emoji). I have enough battles to fight. I’m hitting the snooze button on this one. It’s not like there’s a single developmental window for learning to tie shoes that abruptly shuts after a certain age, dooming a kid to never learn the skill at any other point in their life.

They’ll learn when they are ready and motivated. Our sons, for multiple reasons, aren’t quite there yet. And until you can figure out how to get him there, I see nothing wrong with (temporarily) sending him to school in Lock Laces, just to (for now) make everybody’s life a little bit easier.