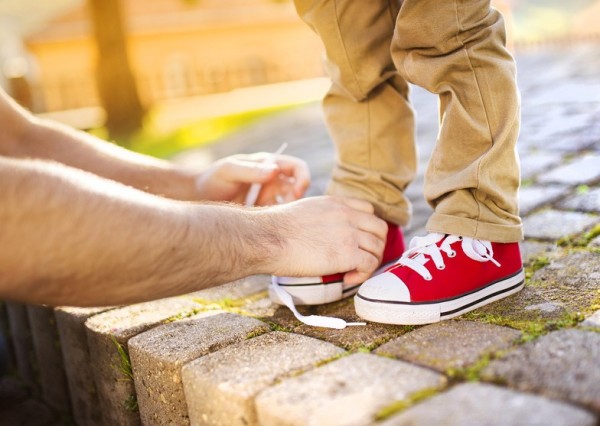 On Tying (and Buying) Kids’ Shoes

Help! I do not have a super serious question about Life. But I do have one about shoes. Specifically, little kid shoes. For the life of me, I cannot seem to teach my just turned 7 year old to tie his shoes. Oh, we practice and he knows the pattern. But he gets super, super frustrated and cries and fusses and whines until my ears bleed. How, how, how did you teach your boys to tie their shoes?

And once you’ve answered that, how do you keep them destroying shoes like, once a month? We go through SO. MANY. SHOES!

“How, how, how did you teach your boys to tie their shoes?”

At the beginning of this school year, I took my first grader (who turned 7 in mid-October) shoe shopping. He immediately became fixated on a pair of black Adidas Sambas, complete with laces. Those were the shoes he wanted, and he wanted them DESPERATELY. And I was like, all right then! It’s high time he learned! He’ll be motivated! This will happen!

We bought the shoes, we brought them home. We got to work. We practiced. Shoes on, shoes off. Pulled out one of those motor-skill dolls with all the buckles, buttons, zippers, laces, etc. and practiced on that. I’d make him tie the initial knot (which took FOREVER, so I admit that most school mornings I ended up doing it for him), and then I’d double- or triple-knot those suckers up in hopes that they’d stay tied throughout the day.

They never did. Every day they came home untied and falling off his feet. I’d ask why oh why he didn’t re-tie them and he’d simply shrug and say it was too hard or took too long.

After a couple months of this, we got a note from his PE teacher politely requesting that we either work on tying shoes at home more (MATHEMATICAL IMPOSSIBILITY, IT’S ALL WE FREAKING DID), or consider different shoes. I delivered what I thought was an effective ultimatum:  If he didn’t keep the shoes tied by himself at school, he wasn’t going to be allowed to wear them.

And that’s why I have a pair of kids’ Adidas Sambas in near-pristine condition sitting in a hand-me-down box and a 7.5 year old who still wears Velcro sneakers.

I do have a 10 year old who technically knows how to tie his shoes and WILL tie them, albeit still very, very slowly and clumsily and with much much whining. And to be perfectly honest, the only reason he ever learned is because he went to weekly occupational therapy for many, many years and it was a skill he worked on with a professional OT. And I totally tied his shoes for him THIS VERY MORNING, because I knew if I made him do it he’d take forever and miss the school bus.

(He’s a leftie with admittedly poor fine motor skills in general, so I usually give him a pass on stuff like this. Possibly too much of a pass? Ugh, I don’t know!)

In other words, OP, I am not the advice columnist you are looking for. I am publishing your question anyway because I am right there with you, and desperately need some advice. Because obviously Velcro Shoes Forever isn’t the best long-term plan and we need to try again. (Not to mention kiddo #3 is also rapidly approaching the Learn To Tie Your Shoes window and I really, really need a win here.)

In hindsight the black-on-black Adidas probably weren’t the best first lace-up shoe for my 7 year old, so I think I’m going to try a set of dual colored laces to help him with the visuals of tying. And probably get something beyond the motor-skill doll for my preschooler (like this or this) and start working on it with him NOW rather than later, since it’s clearly not a skill my children pick up in a weekend. Or a week. Or however many years it’s been now. And I am open to any other recommendations (and not just on teaching the basics, but  how to best encourage them to continue doing it themselves and improving their speed/accuracy).

As for your second question re: shoes wearing out before they’re outgrown, I still really don’t have any magic advice, other than to invest in really good, quality shoes. I know, I know. It sounds counter-intuitive but EVERY TIME I cheap on my children’s shoes I end up paying more in the long run. The no-name shoes wear out and fall apart at such a faster rate and I end up replacing the same size multiple times. (I’m looking at you Old Navy, Target, basically any store or brand that isn’t first and foremost a shoe manufacturer.) Sure, some of it is just luck, as occasionally you find a great bargain shoe and sometimes the name brand bites the dust prematurely, but when I look at our box of outgrown shoes I can see that’s definitely the exception and not the rule. The shoes that last the longest and hold up the best have always been from the brands known primarily for their shoes. (My 10 year old is still wearing the same New Balance sneakers I bought him in August and they are holding up SPECTACULARLY. And he’s very hard on his shoes. So shout out to the New Balance kids line!)

THAT SAID: A pair of “beater” shoes also goes a long way in prolonging the life of the “primary” shoes. My kids don’t really wear anything other than their trusty pair of sneakers (and Keens in the summer, another brand that’s held up really well for us), but they all own a pair of Crocs or rubber rain boots as well.  They aren’t allowed to wear those at school, but they’re easy to slip on and pretty hard to destroy. That’s what I have them wear when they’re out in our muddy backyard or at the beach/pool — basically anywhere where their regular shoes might take a beating. Then I put them all in the dishwasher every once in awhile to clean them. If your kid is consistently trashing his “good” shoes, try a divide-and-conquer wearing schedule: Good shoes for school, outings where there’s a lot of walking, etc., and then an inexpensive shoe for playgrounds and other messy outdoor play.