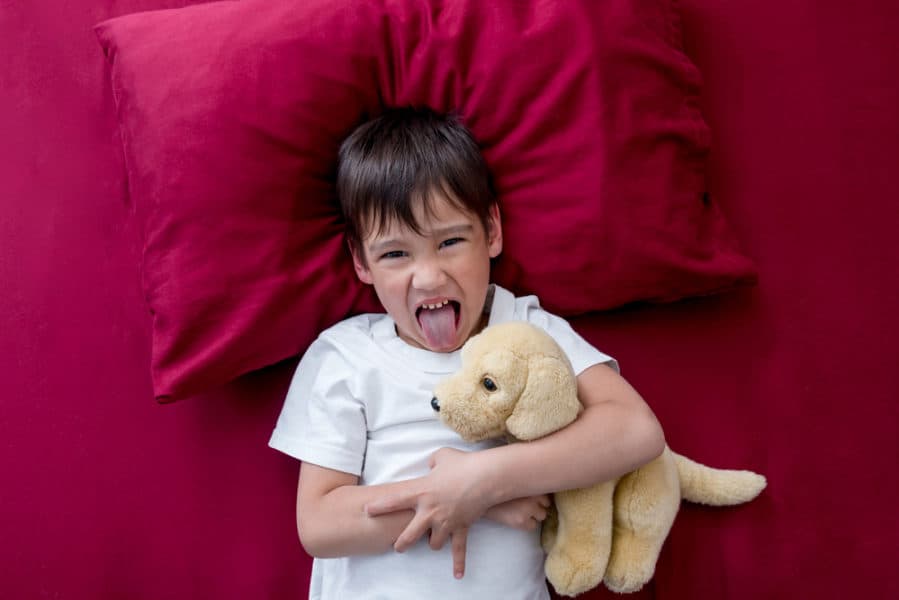 Hello! I’m a long time reader of your blog and always turned to it when I need advice with my son, J. He’ll be 4 in July. I read your post about four-year-old who refuses to go to sleep.

He used to be a great sleeper. Never fussed, solid bedtime routine, LOVED going to bed. Then, the pandemic started. My sweet, happy, boy now has a full-blown meltdown daily and his sleep is going out the window. His schedule was up at 6:40am (he’d stay in bed until 7 when his clock would turn green), nap at 1:30-2:30, bed at 8pm. The past week, he’s been fighting going to sleep, constant power struggle.

We’ve given him choices on pajamas, story, anything he could possibly have a choice on. He still refuses to even lay down until we threaten something big. We’ve tried telling him we’ll be doing checks on him, but he has to be laying in bed. That worked last night, but not tonight. He didn’t care tonight. We’ve tried being calm, extinguishing, and the only thing that works is the big threat after a two-hour-fight.

I’m just wondering if you have any other suggestions? Any help would be greatly appreciated. Thank you!

Whenever I’ve found myself locked in a (losing) power struggle/battle-of-wills with a very small person, I’ve found that many times, the best path through it is to simply take a deep breath, step back and disengage. Stop fighting. Let them sort it out themselves. Recognize and accept the limits of what you can control and what you cannot.

And you cannot make him sleep.

He wants to fight sleep? Let him! That’s his battle, not yours.

I promise you he’ll fall asleep eventually, and probably sooner if the only thing he’s fighting is his own body’s actual literal need for sleep vs. fighting with YOU over lying down/not lying down or eyes closed/eyes open or whatever lines in the sand you’re drawing (and he’s bulldozing right over).

Try very, very hard to not care so much about this.

I know that goes against everything in your parenting core, since SLEEP and the GETTING HIM TO DO IT has probably been your biggest priority and obsession since the day he was born.

But now, he’s almost four, trapped in the house for confusing but kinda scary reasons, can’t play with friends or visit extended family, and is likely getting a fraction of the activity and stimulation levels he’s used to. This isn’t a time for angry fights and big punishments, especially over what’s essentially a fairly typical toddler reaction to a massive change in routine. Because even without the pandemic, he’s definitely not the first three-year-old to suddenly, randomly decide to turn a peaceful bedtime routine into a battlefield.

Sometimes throwing up the white flag on the nightly skirmishes is the key to winning the overall sleep war.

1. At bedtime, he needs to put on pajamas and brush his teeth.
2. He can choose his own pajamas or you can choose them for him.
3. Same goes for a bedtime story. (Sometimes extra choices work, sometimes they backfire, and set you up for demands of an ever-increasing/impossible amount of control.)
4. If he throws a tantrum about anything along the way, he gets until the count of five or 10 (or whatever) to calm himself or it’s no story and lights out, sorry.
5. After you leave his room, your job is done. He has to stay in that room.

HOWEVER, given his determination to escalate each night I might not even tell him that’s A Rule. (You’ll just be handing him another thing to fight you on next time.) So kiss him goodnight, close the door, and leave. He can lie down if he wants to. He can sit up and read or draw next to a nightlight. Hell, maybe he can even play quietly on the floor, if that keeps him happy and non-meltdown-y.

The only things he can’t do are: 1) leave his room (except for bathroom purposes, if applicable), or 2) do anything unsafe/destructive.

(I found that a return of the video baby monitor really helped us around this age and stage, by the way. I could skip the in-person, attention-baiting check-ins and still be assured that — even if they weren’t sleeping — they weren’t scaling the furniture or doing anything dangerous.)

If he leaves the room, send him back without a big fuss and close the door. You don’t need to insist that he get back in bed or anything, just “You need to stay in your room after bedtime. I’ll see you in the morning.” Repeat as needed with a calm, flat affect, and ignore any protests or tantrums. Or tell him that behavior also needs to stay in his room, so he knows the end result is the same no matter what: He’s going back to his room, and he’s not getting a big emotional reaction from you.

“Winning” at the power struggle

He might actually love staying in his room, knowing you’re not coming to check and he can stay awake as long as he wants. He might think he’s “won.” He might think he’s getting away with something, like he’s successfully pulled off the greatest stay-up-late sleep heist of all time. But here’s what you and I know and he doesn’t: He can’t NOT SLEEP forever. In the end, sleep. Always. Wins.

It might be an hour. It might be two hours, or more. But that’s exactly what’s happening now, except that y’all are spending those two hours fighting and threatening him while he’s pushing buttons and tantrumming. That’s EXHAUSTING. No one needs that, especially right now when we’re all trying to get through forced 24/7 togetherness without completely losing our shit.

So. He can fight sleep all he wants. Sleep will win out, in the bitter end. But he’s not going to fight YOU anymore. And honestly, that’s probably half the fun (and most of the entire point) to these antics: That sweet, sweet hit of negative attention, while exerting his independence and ability to drive mom nuts. Toddlers and preschoolers just can’t get enough, sometimes.

The good news is that he still takes a nap!

So even with a few missed hours at night he has a shot at making up some of it during the day, or at least take the edge off his mood with a nice afternoon reset. Since I’m assuming preschool/daycare isn’t happening, he might naturally sleep in every now and then, if his body really starts running on a deficit.

But while we’re on the nap topic: He’s very close to four, so it’s also possible that this rough patch might be signaling his readiness to give up the nap. Every kid is different, but he’s definitely in the age range where that’s something to consider. I would still try to spend a week completely disengaged from the bedtime battle before mucking around with the nap, however, for the make-up sleep reasons I already mentioned.

If he’s still consistently wide awake at say, 9:30 p.m. or later, consider turning the hour nap into a period of “quiet time” where he’s again, in his room and entertaining himself, but not necessarily expected to sleep. My kids’ dropped the nap in an ebb-and-flow, stop-start process, where they would go days without actually sleeping but then would take a string of really solid naps. So I continued to enforce the “quiet time” period for a long time to make sure they at least had the opportunity to sleep if they needed it.

In time, bedtime will stop being a thing. Fighting sleep gets old, especially when you’re not getting any attention out of it. He might continue to whine and drag his feet at bedtime, but he’ll no longer be priming for an over-the-top battle at 7:45 p.m. once there’s no one to fight it with. He might continue to enjoy a little extra reading/writing time in bed after you tuck him in (which is fine! most of us aren’t robots who power off the second we lie down!). And you can go back to enjoying your evenings without threats and ultimatums.

You’ve held up your part of the toddler sleep deal…

…. to establish a reasonable bedtime and routine, and provide a safe and comfortable environment for sleep. The rest — the whole actually going to sleep part — is unfortunately, ultimately up to him.

3. Ceding a Bedtime Battle to Win the Bedtime War