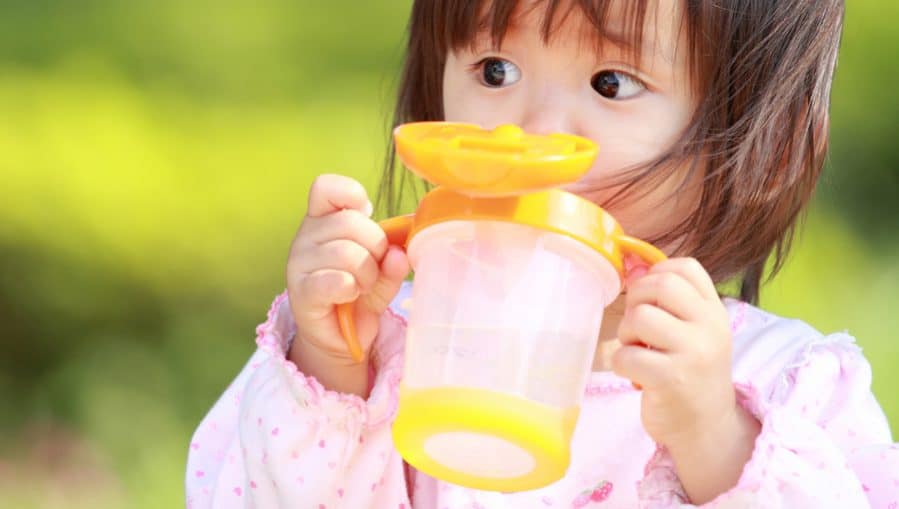 First, I absolutely love your column! I read nearly everything before my daughter was born, and I go back to it all the time whenever I can’t figure something out. You even convinced me to cloth diaper, which I am 100% happy I decided to do!

So, I’ve run into a conundrum with my daughter and I couldn’t really find anything in the archives that sounded close to like what we have going on.

My daughter just turned one. About a month before, we started working on the bottle-to-sippy cup transition. She had been showing a lot of interest in our cups, and always trying to take cups from us and drink from them so we figured she was ready. Admittedly, daycare did most of it, and we really only handled the removal of the nighttime bottle. We did this by offering her a sippy cup with formula and if she balked at it, I’d give her a bottle with water. After a few nights she would go for the sippy cup, and eventually she was just skipping that pre-bedtime snack all together. Two weeks before her birthday she was down to just her morning bottle, and she was consistently drinking from her sippy cup (formula/milk at meals/snacks, water throughout the day). She was even drinking from regular, coverless cups. I spent two weeks of vacation with her, and the day after her first birthday, when she went back to daycare, all hell broke loose.

The first thing that happened was that daycare would only give her milk at meals/snack, and she wasn’t allowed to have a sippy cup throughout the day. She isn’t a huge fan of milk, and gets most of her hydration from the water she drinks throughout the day. So we were already worried about her hydration because we saw a dip in number of wet diapers. Then, she picked up a stomach bug at daycare which lasted for 4 days. She refused her sippy cups during this time. We tried water, formula, watered-down juice, Pedialyte, a variety of broths, and even weak decaf tea. Every option resulted in a sippy cup being pushed away or thrown. When her wet diaper count dipped even more we started giving her bottles of formula again-that was the only thing she would willingly take in during this illness and we were seriously concerned she was getting dehydrated. We did end up taking her to the ER and the doctor said she wasn’t dehydrated and to keep doing what we were doing. At the same time, her solid food intake went way down during this.

Well, now she’s over her stomach bug but she’s not over her bottles. All the headway we made with the sippy cup transition is erased, and now she won’t even take her sippy cup anymore. Every offer is met with screaming and throwing of the cup. I even just casually set the cup next to her while she’s playing, she’ll either ignore it or push it away. I’ve tried different liquids, different cups-nothing seems to be appealing to her. Not even drinking from “grown-up” cups, which she loved before. To top it off, she hasn’t really regained her appetite either. Prior to this illness, she was an extremely avid eater-it seemed like we could never put enough on her plate for her and she liked everything. Now, she hardly touches her meals. She’s hungry at bedtime and won’t accept anything but a bottle. We tried the same strategy as before, and even tried just letting her cry about it (which only resulted in her crying so hard she threw up).

So I guess my question is-what else can we possibly do to get this kid back on her sippy cups? I know being on bottles is bad for her at this stage, and I was so stoked about 1) not having her take them anymore and 2) not having to buy any more formula. She’s not in daycare any more because my husband teaches and school’s out for summer, so we’re not getting help from them like we did before. I called daycare and asked them how they got her off the bottles, and they said all they had to do was offer her the sippy cup.

So I’m trying to piece together a timeline here of just how long ago the stomach bug hit, but in my experience, it can honestly take babies and young toddlers a REALLY, REALLY long time before they’re fully “over” it. Those viruses just take SO MUCH out of them, so it’s perfectly understandable that their little bodies need a lot of time to heal completely (both physically and mentally).

Even if they’re no longer actively vomiting or having diarrhea, they just…aren’t themselves quite yet. Low appetites, an aversion to anything and everything they may have eaten or drank around the time they got sick, and yes, a regression back to formula or an increased preference for nursing while rejecting solids. All pretty common, and unless we’re talking a timeframe of more than…hmmm, Imma pick six weeks, but even that’s probably debatable…I’d chalk her sippy cup and food rejections as solidly within a “she’s still recovering, give her time” window.

kids just aren’t linear like that, especially when it comes to anything related to food, sleep or potty training

(When I was about four years old, I came down with a stomach bug after eating angel food cake. To this freaking day, I cannot eat it. I even tried to overcome my visceral aversion to it a few years ago and couldn’t even choke down a single bite. God, just typing this is bringing up phantom smell/taste issues. Let’s forget I even mentioned it.)

So I actually think you should drop the sippy cup issue completely, for now. The barrage of different liquids, the constant offering, the forcefulness of her rejection-on-sight…she probably associates the cup with feeling sick and needs some time away from it. Focus on getting whatever liquids and nutrition you can for a couple more weeks. If she only accepts a bottle at bedtime, just brush her teeth afterwards. (The potential for enamel damage is really the main reason to wean off bottles at a year; oral motor skill and speech concerns aren’t a big issue yet, or really at all since she’s proven herself capable of drinking from other cups.)

Honestly, if she was my baby, I’d probably just table the issue until she returns to daycare (which I assume will be at the end of the summer). Let them make the transition again, because by then she really will be over the virus (until the next one, ugggggh) and will be more likely to accept it because she’ll instinctively know a bottle ain’t coming. (Daycare can really be magic like that.) Taking bottles for like, three months past her first birthday is SO not the end of the world, even though I know it’s always so frustrating when your child suddenly regresses on something you thought was done and handled. Unfortunately, kids just aren’t linear like that, especially when it comes to anything related to food, sleep or potty training.

Once you see an improvement in her appetite, you can once again try weaning off the bedtime bottle, same as before. She probably won’t accept a cup instead (and in my experience the act of offering the alternative can just piss them off — bottle/cup out of sight, out of mind, etc.). You can read this article I wrote about dehydration as well, and focus on offering her water-heavy fruits and vegetables. Kids CAN get dehydrated, but also a dip in wet diapers as they age is more often just the natural process of their bladder development. They hold more pee, thus pee less often. The COLOR and SMELL of the diaper is actually the better way to gauge their hydration level, rather than the number.

Anyway, I really think she just needs more recovery time. Don’t push the cup right now and don’t let the regression drive you too crazy.  We all like to be babied when we’re sick, you know? So go ahead and let her be a baby with a bottle for a little while longer.