Twitter Facebook Pin It Email Article
Prev How To Deal With Your Child’s Sadness, Anger, And Other Tough Feelings Next Is It Safe? Hot Yoga During Pregnancy 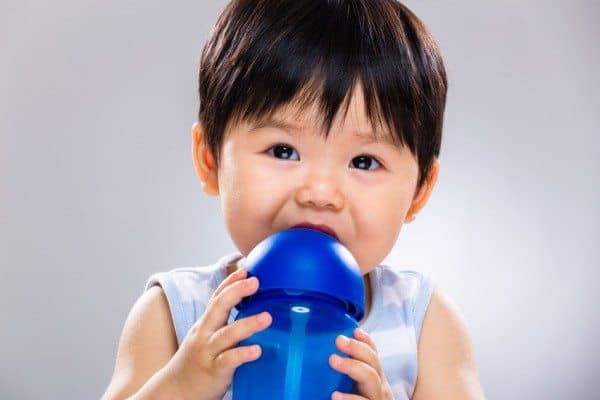 Is My Toddler Dehydrated?

I’ve been reading your work since I first learned that I was pregnant and have loved your down-to-earth advice. I have been staying home with my almost 17 month old son since he was born. At 12 months I started working two days a week, but they were short days and my son was only in daycare from about 8am until 3 or 4pm. Next week I go back to work for real. Full time, long days, and an hour long commute. I’m sad, but more importantly, terrified that my kid won’t drink enough.

My son is moving to the toddler room at daycare on Monday and they won’t allow him to have a bottle. He has always refused a sippy cup. He can and does drink from an open cup at home, but they won’t offer an open cup at daycare for obvious reasons. Until recently he had three bottles of milk a day. I know, I know, but he won’t drink! I cut out one bottle a couple of weeks ago and am now only offering bottles after breakfast and before bed. That means that when he only has sips at daycare he doesn’t have anything significant to drink from 7am until 7pm. And I’m afraid that this will make him dehydrated when he is at daycare five days a week.

I’ve been told that kids drink when they are thirsty enough. But I learned when he was 10 months old that that isn’t exactly true for my kid. He weaned himself and basically wasn’t drinking anything, except I didn’t know how much he should have been drinking so I let it go on for awhile. As soon as I offered a bottle his wet diaper count tripled.

So what do I do? We are back to a low wet diaper count, even with the open cups at home. I know I offer water more often at home than they do at daycare and still he isn’t drinking enough. I HAVE to go back to work on Monday and I HAVE to keep my kid hydrated, but they seem to be opposing goals at the moment. I know that my going back to work anxiety is contributing to my concern, but I also feel like I’m failing my kid. Any advice you offer would be appreciated.

Recognizing the Source of Your Anxiety

It will probably never cease to amaze me just HOW MANY WAYS our toddlers find to freak us out. My kid, at this age, lived his life on a non-stop water drinking binge, to the point that I was convinced he was diabetic and dragged him in for testing. He was fine. He just really liked drinking water, and still does.

So. My gut agrees with your second-to-last sentence: Your anxiety level over the hydration issue is stemming from the whole Bigger Picture of going back to work and guilt and the general huge adjustment of handing your baby over to another caregiver after almost 17 months (mostly) spent at home. It’s perfectly normal to worry about…well, a million different things while you’re in the middle of this transition. In my experience (for whatever that’s worth), you’ll feel better a couple weeks in, once you get used to the new routine, have work tasks to channel your energy into and focus on, and can look back and take a deep breath because everybody is alive and well.

However, I am in no way dismissing your concern as Irrational Mommy Guilt. It is absolutely possible for a toddler to dehydrate himself — it’s actually quite common for them to ignore their thirst during playtime and not request a drink until they’re not feeling well. Playing outside in hot and humid weather puts toddlers at particular risk. So there is a distinction between “whatever, he’ll eat when he’s hungry” and “whatever, he’ll drink when he’s thirsty,” because sometimes they just don’t.  That said, let’s look at some toddler hydration facts and see if we can find you some peace of mind.

At 17 months, milk should be limited to about 16 to 24 ounces a day. Assuming the bottles you mention are 8 oz each, three bottles a day puts him at the VERY TOP of the recommended limit. Two bottles a day still gets him enough milk for a 24-hour period. Obviously, I can’t technically recommend that you keep up with the morning and bedtime bottles for various reasons (dental, speech & sleep crutch that’s only going to get harder to withdraw), but if it helps keep your anxiety in check for the first few weeks to know he’s getting enough milk, you won’t hear much ruckus from me about it.

Let’s also talk about wet diaper counts. You didn’t mention specifics, other than you think it’s currently “low.” And “tripled” once you caved and re-introduced the bottle. I’m curious as to what “low” is. Obviously, a 17-month-old is not going to go through as many diapers as a newborn, or a baby under 12 months who gets the majority of his nutrition through breastmilk or formula. As he gets bigger, so does his bladder and his capacity to hold more urine…and for a lot longer. And while there is no one set “correct” number of diapers because it varies SO MUCH between babies, around 5-6 diapers a day (or 24-hour period) is pretty normal at this age, especially for a kid who was probably never a heavy wetter.

A better indication of his hydration level, rather than the number of diapers, is the color and smell of his pee. If it’s a light color (or practically invisible in a disposable) and only has a mild odor, he is FINE and perfectly hydrated. If his pee is darker colored and really bad smelling, then yes. He is dehydrated and needs some fluids. If there are tinges of blood in the urine, he is seriously dehydrated. Note that it is NORMAL for the first morning diaper to be darker colored/worse smelling, because he’s gone all night without liquids. (Most of us wake up at least mildly dehydrated.) But after his morning milk and breakfast, his body should adjust and his next diaper should be lighter and milder smelling. If his first wet diaper after daycare more or less passes the color/smell test (again, it’s normal for it to vary), you can rest assured he got enough fluids during the day, one way or another.

Other Sources of Water

At 17 months, he can also get a LOT of required liquids and hydration through solid foods. Fruit and yogurt both have a good amount of water content in them, for example. Certain vegetables do too (cucumber is 96% water!). So if he’s devouring fruit and veggies during the day, it’s not surprising that he’s not craving a lot of extra water. And if he’s NOT, well, consider offering those instead of trying to push plain water on him. Not sure what the food/snack situation at your daycare is, but if you’re packing foods yourself, load him up with juicy fruits, yogurts, even those squeezable fruit sauce tubes, etc. Healthy fruit popsicles are a another good option for a post-playground-on-a-hot-day hydration source. Here are a few different lists of high-water content foods for inspiration.

Now. If you’re still reading at this point and freaking out because 1) he’s not wetting 5 diapers in 24 hours, 2) his wet diapers consistently look dark and smell bad, and 3) he refuses to eat any of the food items on any of those lists, then you should go to your pediatrician for advice. Perhaps he should get some Pedialyte or it’s okay to tempt him with diluted juice, but that’s a call the doctor should make, after confirming that hydration levels actually ARE a cause for real concern.

Some kids drink a lot. Others…not so much. Some soak through a dozen diapers a day through toddlerhood and others do not. My water-crazed toddler went through the fewest diapers; my heaviest wetter almost always left half-full cups of milk or water behind at mealtimes. IT SOMETIMES JUST DOESN’T MAKE ANY SENSE. Other than they exist to drive us crazy and scare the crap out of us. I’m hopeful that’s what’s going on with your son, and that you can find some peace of mind with some different snack offerings during the day and fluids in whatever type of cup/dispenser he’ll accept when he’s with you.