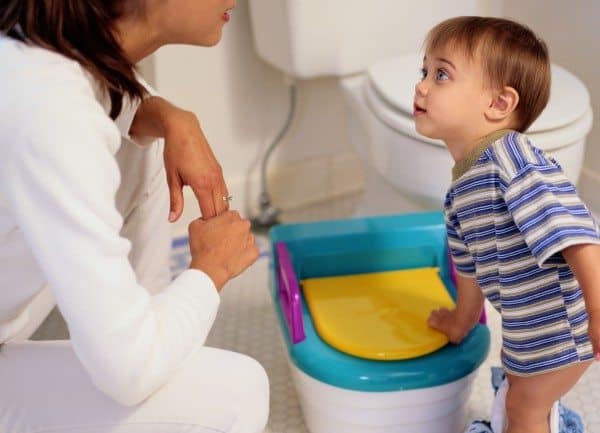 First, Thanks for your advice previously. My darling kiddos never did stop taking off their diapers at naptime so we decided in January to go cold turkey and potty train. They were 26 months. (As a side note, naptimes they still take off their pants and underwear nearly every time, they just aren’t confined to cribs anymore, and so they trash their room and several times a week they use their carpet as a toilet. Lovely. So that didn’t help that situation at all.) We did a 3-day bootcamp, pants off, all-potty-all-the-time weekend and after the third day, they both totally got it. (#1 and #2, pretty consistently.) Sure, there were accidents, but that was expected and got better after the first week. They both did great for the first two weeks, we were able to discontinue M&Ms after about 4 days and the cheering and high-fives were enough incentive.

Sunshine and rainbows, right? Kid One has been awesome. No accidents in weeks, I would consider him fully trained. Kid Two, however, did great the first two weeks, then about 3 weeks ago started pooping in his pants. EVERY. SINGLE. TIME. And on the possibly TMI realm, the kid poops several times a day. But here’s the thing. He will go into the bathroom, stand in front of the potty, and poop his pants without making so much as a tiny effort to go into the potty. He does this nearly every time. He is uncomfortable and immediately asks for clean underwear. He poops his pants a half dozen times a day. Every single time he repeats the mantra “Poopy Go in potty! It’s accident. Accidents Happen and it’s OK!” (We have Elmo and Grover to thank for that little piece of wisdom.) I read the column you posted previously about kids only going in their diapers, but that is not exactly our issue. He knows he needs to go in the potty. He cheers and claps when his brother goes. He goes into to the bathroom as though he wants to use the potty, he just doesn’t. We put away all the diapers, and he’s almost entirely pee-perfect. He even wakes up dry most mornings and even gets up in the night to go if needed. (Kid One wakes up wet every morning, never gets up in the night, despite a near-perfect record in the day.) So together they equal one awesomely potty trained kid. Awesome if they weren’t, in fact, two kids.

So far we tried the stickers/new toy incentive. Kid One quickly filled his sticker chart and got to go to Target with Daddy (By himself!) and pick out a toy. Kid Two totally covets the Cookie Monster toy his brother picked out, and keeps talking about how he is going to get Elmo as his treat. Except he has earned exactly ZERO stickers because he has not made a single poopy in the potty. Meanwhile, the sticker thing is motivating Kid One like crazy and he’s 1 sticker away from his 2nd treat in a week. We have tried to go back to the bootcamp, following him around without his pants, rushing him to the potty when needed. Always to the “Accidents Happen, It’s OK.” result. He has asked a couple times to “wear diapers like baby” which I have responded by building up how awesome his Buzz Lightyear underwear are and how he’s such a big boy. And how Buzz, and Woody and Elmo and Captain America and whomever else I can think of at the time all go poopy in the potty so he should too. I am out of ideas, but I am exhausted with changing his pants a dozen times a day, the laundry, oh the laundry, and I am dreading going into public because he is a ticking time bomb. I am running out of ideas. I know there may be nothing I can do, he just needs to figure it out on his own, but seriously, it’s going to be summer again soon and I don’t want to be reluctant to go out of the house and enjoy it because my kid poops his pants ALL. THE. TIME.

So once again, oh seasoned veteran parent of boys and collective brilliance of the internet, please fix my kid’s issue. Thanks a billion.

Okay, so I’m going to preface my advice — or soften the blow, depending on how you look at it — by saying that I was given this very advice, not so very long ago, about my adorable and delightful middle child. Who went through an extended potty training regression after the birth of my third child, especially when it came to poop. I brought it up to our pediatrician, having tried everything I could think of, including stickers, rewards, bribes, praise, ignoring, you name it.

“Put him back in diapers,” she told me. “Tell him diapers are for babies. And only babies poop in their pants. You’re not shaming him. You’re just telling him the facts.”

I felt uneasy, initially — we were SO CLOSE, I was SURE, and I was worried this would be kind of shame-y and defeatist and maybe we’d see even more of a regression if we let him take that step backwards. Especially since he seemed to welcome the return of the diapers and pull-ups. He was jealous of the baby! So maybe he wanted to be a baby! And would have no motivation to finish training, now that accidents were off the table, etc. etc.

But you know what? It was the right call. It saved my sanity (I did have that pesky newborn at the time, after all) to not be fighting the poop battle or cleaning up accidents, and it turned out the happiness over the diapers was incredibly short-lived. Maybe two weeks later? A month? He decided that he was not a baby after all and was tired of being treated like one, and that was that. He pooped on the potty one day and refused to even consider anything but his big-boy pants the next. Done.

So. Honey. Put that kid back in diapers.

I mean, when I’ve dealt with the halfway-there kiddos, we were dealing with one poop incident a DAY. You have a kid consistently having multiple accidents a day, every day, with or without diapers, standing in front of the toilet and making no effort. That’s not a halfway-there kid, I’m sorry. I mean, if you had a kid who could poop on the potty but peed his pants the rest of the time, you’d have him in some good absorbent pants, right? He’s not ready, either mentally or physically or something. And the fact that he’s asked for his diapers back means he probably knows it.

He’s still on the young side — especially for a boy, if I may engage in sweeping generalizations about maturity and that girls seem to train easier/faster than boys. He obviously gets a good amount of the process, but something just hasn’t finished connecting all the dots. Maybe he doesn’t get as much “warning” as his brother, or is getting a little too much fiber. Or he just can’t be bothered with stopping what he’s doing so many times a day to be bothered. I don’t know. And the truth is you’ll probably never know “why” either. But I can tell you that continuing to drive yourselves collectively crazy with HALF A DOZEN POOP ACCIDENTS ON A DAILY BASIS is not going to solve anything.

I promise you — PINKIE SWEAR PROMISE — that he will poop on the potty. At some point. Probably in a few months. I also promise that there’s nothing you can do to push that date up, realistically. Begging, pleading, bribing, training yourselves to plop his butt on the toilet every time you think his face looks a little weird…none of that works when you’re dealing with a kid who isn’t ready. And while your son shows some signs of being ready, none of them are quite as compelling as the whole HALF A DOZEN POOP ACCIDENTS EVERY SINGLE DAY thing.

You have twins, but they are two different kids — while the peer pressure can certainly be handy, it’s okay and normal if they train at different ages. (There was a six-month age difference between my first two children’s respective training ages.) Keep doing what works for his brother for now, then phase out the stickers/rewards when he’s done. And then don’t be afraid to bring them back in the future for your other son. When he’s ready. From the sound of him, he’ll probably let you know when he’s ready.