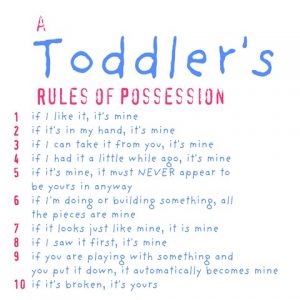 My daughter is almost three. She just got her cast off from a broken leg (freak sliding accident!). All in all she has been a pretty easy going kiddo. Decent sleeper, schedule keeper, pleasant to be around, funny sense of humor, easy to potty train, etc. However, during the cast period, she starting some SERIOUS fit throwing. I’m talking SCREAMING at the top of her lungs for something that would not have previously set her off that hot and WHINING CONSTANTLY. We gave her a pass, since I know kids can regress behaviorally during a time like this—we still did a couple of time outs and reprimanded her, but no serious punishing.

Guess what? The cast is off and life as we knew it is resuming… but the SCREAMING and the WHINING are apparently here to stay. I’m working on some sticker charts (some success) and doing time outs, taking away toys, etc. but my question is actually a bigger picture one. When can you start teaching your kids about appreciating what they have vs. what other kids don’t have? I think this is what seriously frustrates me the most. My kids are super spoiled with attention, affection AND things (we do discipline and are strict on schedules—don’t worry), but I am ready to start showing her how some other kids have to live.

I have read awesome ideas about having older kids have birthday parties where their friends bring toys to donate and at the holidays cleaning out toy rooms with your kids to donate, but I still feel she is really a little too young to grasp that. How can I start instilling some of these values of appreciation and gratitude at this very young age?

PS Also how many times do you have to tell your parents and in-laws that we DON’T WANT ANY MORE TOYS? Money for their college accounts, please!?!?!? They are still not getting it.

Hmm. Yeah…she’s really on the young side here, in terms of understanding “how other kids live.” Toddlers are, universally speaking, pretty selfish creatures, but mostly because they’re just emotionally immature creatures. (As opposed to being inherently, unrequitedly, permanently selfish creatures.) Obviously, resisting and curbing the spoiling and toys!toys!toys! onslaught are noble and important efforts. Empathy and compassion must be modeled at all times, of course. But expecting a two year old to understand…poverty? To exhibit high-level empathy for the less fortunate? To understand just how “good she has it?” I dunno. The kind of comprehension you’re hoping for is still a few years off — a level of empathy most children aren’t capable of truly feeling until age five or six. (And even then, it’s a struggle.)

There are definitely things you can do with young children to start building a good foundation for awareness of the less fortunate. Encourage her to contribute items to a charitable donation bag. Start by going through your closet and have her put your items in the bag or box. Then baby-step your way into helping her select items from her own closet that she’s outgrown. Don’t zero-to-sixty your way into demanding she give away toys — even baby toys — or make her feel like you’re coming for “her things.” (What toddlers lack in empathy they more than make up with a natural sense of territorial possessiveness.) Have her help you go through your pantry for a food drive, or take her to the toy store to buy something new for a shelter.

But again, don’t expect this stuff to immediately “click” and result in fewer tantrums and less whining. She’ll probably have no real grasp on what you’re doing. But that doesn’t mean it’s not worth doing, provided you have realistic, long-term expectations. You’re building a foundation, not shooting a magic bullet at the terrible twos and threes. Your daughter’s behavior sounds…well, pretty typical, for almost-three. As she gets older, you can start talking about wants vs. needs (that’s actually in the kindergarten curriculum around here), or institute a new-toy-in, old-toy-donated policy.

I want to caution you, however, from using the hypothetical “less fortunate” as a kind of…punishment? Or something scary or guilt-inducing for her? Or because you’re angry or frustrated because she’s taking her family’s security for granted?  Right now, focus on her behavior and her growing ability to be aware of/control that behavior. How that behavior ranks in the realm of First World Problems? Not so much. (You also don’t want to prematurely expose her to fact that the world is a terrifying, unkind place, or make her feel like her sense of security is false and can be ripped away at any moment, like so-and-so-down-the-street-who-lost-everything-in-a-fire-that-could-happen-to-you-so-stop–whining. Helloooooo anxiety!)

I mean, how many of us also heard the “there are starving children in Africa!” scold at dinner time growing up, and still…you know, refused to eat dinner or responded with a smart-alecky “I’ll mail them my green beans, then?” And hopefully we all still managed to grow up into decent, socially-conscious adults. Despite driving our parents crazy with our selfish, entitled moments.

I don’t remember how old I was (probably early-to-mid-elementary school age), but I vividly remember getting a comic book at Sunday School that included a panel about…well, a starving child in Africa. Just the night before I’d thrown a protracted fit over my dinner and refused to eat it. I was absolutely WALLOPED with guilt. I came home and cried, unable to shake the image of a starving cartoon. I talked to my parents about it and they suggested that we sponsor a child overseas as a family, via one of those international charities that allows you to pay for a child’s schooling and meals. And we did, for years. We put her picture on the fridge and read her letters and all that. I hope her involvement in the program made a difference for her (at some point in her teen years we were notified that she was no longer participating and our updates sadly stopped), but I know it made a big difference for me. BUT. It made a difference mostly because I was ready, because it wasn’t forced, because my parents modeled empathy and compassion as best they could and then allowed me to have my own lightbulb moment.

Right now, at almost-three, she’s really just learning that other people have feelings too. Next on her emotional maturity agenda is to realize that her behavior and words can impact other people’s feelings. And she’ll naturally test this out, quit a bit, in both positive and negative ways. But there’s a mature and compassionate human being in your future, I promise. Provided that you are a compassionate human being, of course.

Here’s another great article on empathy and compassion in children. The fact that your daughter is “spoiled” with attention will actually be key to her own emotional development:

Dr. Mark A. Barnett, a professor of psychology at Kansas State University in Manhattan, proposes that the route to caring for others begins with a solid sense of self. Just as biologists suspect that only those highly intelligent animals capable of recognizing themselves in a mirror can put themselves empathically in a fellow’s furry shoes, so a child must feel in control of his own identity before attending to the pleas of the larger world.

“A child whose own emotional needs are taken care of is more responsive to the emotions of others,” Dr. Barnett said. “A child who is insecure has difficulty vicariously experiencing emotions of someone else.”

And here’s a reminder for all of us that those charitable actions matter, even if our children are still too young to fully “get it:”

Beyond being loved, a child learns empathy by example. Empathetic parents generally rear empathetic children, said Dr. Barnett, particularly when those compassionate gestures extend beyond the members of the immediate family. Children figure out soon enough that parents who care only for their offspring in truth care only for themselves.

(As for the PS. Yeeeeeah, I’ve given up on trying to dictate how other people spend their money, even on my children. Giving money to college funds is never going to win out for a grandparent who wants to see the joy and smiles and squeals of a child ripping open a big ‘ol box of conspicuous consumption. If you want a college fund, skip the holiday shopping and put the money in it yourself. Let the relatives take care of having “stuff” to unwrap. And feel free to collect anything that underwhelmed or was left unopened and return it…or donate it.)