Twitter Facebook Pin It Email Article
Prev Homework, How Much Should Parents Do Next Ten Things The Baby Books Miss 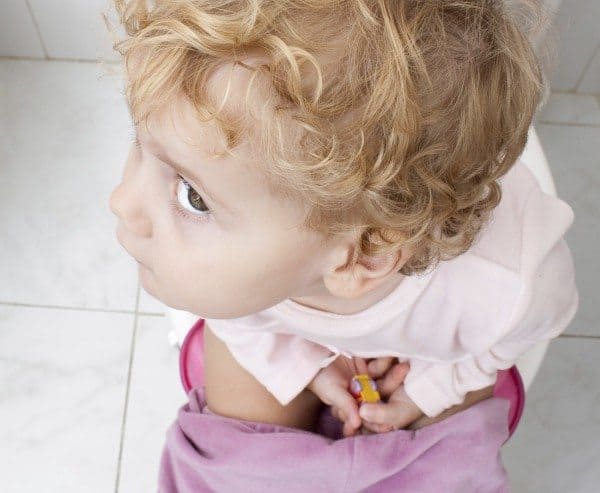 I love your advice and practical solutions. So…Help! My lovely daughter is 2.5. She is fully potty trained for pee, except for wearing a diaper at night. So, yay! The problem is she refuses to poop in the potty. She has done it before, and we know she can, she just doesn’t want to. She will wait about 2 minutes, sometimes less, after we put tuck her in (wearing a diaper) for bed before she comes out “I poop in da diaper!” all proud of herself. We have tried many things, explaining that is icky, star charts to earn prizes (she did GREAT for two weeks until her molars started coming through – stupid molars!), even taking away big girl things. She fully understands the concept, has the control, but just doesn’t do it.

I don’t know if it is that we have tried too many things (I suspect this may be part of the problem), but I don’t know where to go from here. I know it is a normal stage, they are afraid to lose part of themselves, etc etc, but how do we get past this? I am perhaps a little anxious as we are expecting our second in a few months, and I am getting more and more tired of throwing out diapers she literally wore for a few minutes (she has even pooped a little, get a new diaper, poop more, get a new diaper, finish pooping – I got that to stop by making her wait 10 minutes after each time so she could finish, but that whole process takes 45 minutes of my dearly needed sleep time). We are at the point where we have let her sleep in it a few nights, but I HATE this. I’ve seen so much about other parents going through this, but how do we get past it? Do I just suck it up and let her keep sleeping in it? Help!

Yep. Yep yep. Been here, done that. I’m always hesitant to go into nitty-gritty details about my children’s potty training habits, since while yeah, everybody was a baby and wore diapers and crapped their pants for awhile, there’s something distinctively less charming about the potty-training power struggles that ensue during the toddler years. But: YEP.

Let’s just say, without naming names or anything, that I also had a toddler who was completely trained to pee in the potty at 2.5. A few days of big-kid pants boot camp and BAM. Mission accomplished. We still used training pants/diapers at naptime and bedtime, and it quickly became apparent that this was his poop-receptacle of choice. That he would HOLD it until we put that pull-up or diaper on him. And that yes, he would hold it for longer than a human being should EVER hold it. As badly as I wanted to be done with potty training, I did not want him to hurt himself over it, so we gritted our teeth and kept buying those damn pull-ups and kept cajoling and encouraging, mixed in with occasional stretches of ignoring and waiting for him to make the big-boy decision on his own.

Here’s where you’re going to put your head down on the keyboard and cry: It took about eight or nine months. He was closer to 3.5. And I don’t think it was anything we “did,” other than the fact that he finally, FINALLY made that big-boy decision on his own.

I can’t remember where I first heard the advice that “you can’t make them eat, sleep or poop,” but oh my hell, it’s so true. So many of us choose one or more of those hills to die on with our babies and toddlers, but the fact is, those are three bodily functions that THEY are in complete control of. AND THEY KNOW IT.

What finally prompted my toddler-who-shall-not-be-named to make the big-boy decision to poop on the potty instead of a diaper? Well, a couple things, but they were all things we’d tried repeatedly before with no success. So again, it was probably just the right time, and he was “ready.” But I guess the takeaway lesson is that just because something didn’t work doesn’t mean it was the “wrong” approach and you should never try it again. For us:

1) Peer pressure. Once we had another baby to diaper, I stopped buying the expensive disposable training pants and went back to big ol’ boxes of store-brand value diapers. That looked just like baby brother’s diapers. THEN, when I switched to cloth diapers for his baby brother, I found that they actually fit him as well. So guess what! You’re gonna act like a baby, you’re gonna wear the same thing as the baby. At first this didn’t seem to faze him in the least, but after a couple weeks…ehhh, I don’t think he was so thrilled about wearing those bulky triple-stuffed Fuzzi Bunz that felt so very “wet” compared to what he was used to.

2) No more diapers at naptime and bedtime. Once we switched over to cloth, he started staying dry (or dryer) during naps and nighttime, so we upgraded the mattress protection on his bed and let him go commando. First just for naps, then at night. And I was surprised that oh, he actually was only waking up wet because he knew he could, and was more than capable of getting himself out of bed and to the potty in time. I was just so anti-dealing-with-bed-accidents that I’d never really given the other option a try. He’d still request a diaper for doing his other business, and I’d oblige, AFTER requiring him to sit on the potty for five or 10 minutes. Then he got the cloth diaper, fine. Just wait here while I get one from the BABY’S ROOM. The diaper was no longer a “given” at a certain point in the day that he knew he could wait for.

(I also tended to be “busy” for as long as possible after he went and was requesting my clean-up assistance. You know, because if it bothered him so much in the diaper he could SIT IN IT OR JUST USE THE TOILET LIKE EVERYBODY ELSE GAH OKAY DEEP BREATH 1-2-3 DON’T LET HIM SEE HOW CRAZY HE’S DRIVING YOU.)

3) Bribery. We’d tried sticker charts, candy, promises of new toys, you name it. Never worked. Then, over a holiday visit with his grandparents after he turned three, he watched an old VHS copy of 101 Dalmatians. And he thought it was the greatest movie he’d ever seen. He asked me one day if he could watch it at our house, and I said yes. IF he pooped on the potty. THEN I would buy him 100 Dalmatians. I guess he thought this over for a few days and then randomly just…came out and asked to use the potty instead of the usual diaper request. He went, we drove to the nearest store and bought the DVD, and came home and watched it. Done.

After that, to reinforce, he was ONLY allowed to watch that particular movie after pooping on the potty. Yes, there was at least one night where we totally had 101 Dalmatians playing at 11:30 p.m., but dammit, the kid pooped in the potty. What’s fair is fair.

I want to underscore the fact that none of these things equaled an immediate solution. And who knows, maybe the months of other things we tried (Everybody Poops and other potty training picture books, telling idiotic stories about the “party in the potty” that the poop WANTS to go, you name it) DID help, just as part of a long, cumulative process. At some point, it clicked, or he simply stopped being scared or nervous about it, and decided to give a try.

We did NOT do anything punishment related, however — no yelling, shaming, losing of toys or privileges. I personally don’t think this is a good idea, especially if you think your child has anxiety about pooping on the potty (that it will hurt or they’re “losing” something or has sensory issues or whatever), a good vs. naughty dynamic sets it up to be an even bigger power struggle than it already is. Trust me, your child KNOWS you want him or her to poop on the potty. Your child KNOWS how much you care. By casting yourself as the bad-tempered bad guy who just cares oh so very very much — enough to yell or punish — you’re not really giving your child much motivation to poop on the potty to please you or make you happy, much less reinforcing the idea that the potty is a natural, normal big-kid thing and no-big-deal and all that.

Your daughter WILL come around, I promise. Try to find a balance between regular reinforcing that yes, this is your expectation and what she needs to do…and not making a completely huge federal case out of it that makes her feel pressured or anxious. She could completely surprise you tomorrow, or she may dig her little heels in and fight you on this for another six months. If that happens, I’m sorry, but just know that it’s nothing you’re doing WRONG and is, in fact, pretty darn normal, and we’re all here nodding in sympathy with you, because YEP.

(For the record, I’ve now got another child [WHO ALSO SHALL NOT BE NAMED] who will poop AND pee on the potty like a pro…but only if he’s at home, and not wearing any pants whatsoever. And he will still try to hold BOTH in until he gets a diaper at nap or bed time. Put him in underpants? Need to leave the house? Accident central. I am ready to kill the next person who makes a sweeping generalization about cloth-diapered kids potty-training “early” or “easily” because gaaaaaahhhhhhhh he’s driving me craaaaaaazy.)