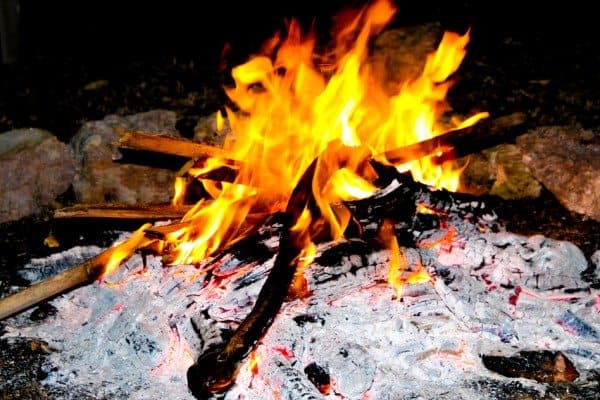 Many, many moons ago, my husband and I went on a camping trip together, just the two of us, while we were dating. I hadn’t been camping since I was a little kid. But he’s a seasoned camper and I bought a new tent and an air mattress, and we were newly in love and I remember that trip being so much fun. This is notable because I’m not really a roughing-it kind of person. Not that I require people to peel grapes for me, or anything, but I tend to be cranky if I haven’t gotten enough sleep, and I’m not really a fan of sleeping on the ground.

Fast forward a few years: The husband and I were newly married and I’d just moved down to Georgia, and as my children were acclimating to a new environment, new house, new stepdad, we somehow got it into our heads that it would be so super fun to take them camping. I had never taken the kids camping before. Also, it was July. In Georgia. (As northerners, it’s possible we hadn’t quite processed the whole doesn’t-cool-off-at-night-here thing.) My husband got stung by a wasp while setting up the tent, which meant that my son spent most of the remainder of the trip screaming every time he saw a flying insect. At 11:00 at night it was still hovering around 90 degrees outside, and my daughter’s solution to being too hot was to complain about it—often and loudly—to make sure that no one else could sleep, either. We made it through one night (barely) and I may have suggested that we were simply not “camping people.”

Maybe he knew something I didn’t, or maybe he’s just an incurable optimist, but about a year later, the husband talked me into a small travel trailer. We call it camping-but-not-camping, because yes, we go away from home and plunk ourselves down in the woods or by a lake or whatever, but we also have beds and air conditioning and a functional (if tiny) kitchen. We’ve since all learned the joy of camping—such as it is—and now we have an inexpensive way to zip off for a bit of R&R and family togetherness. Now that my kids are teenagers, the only thing that’s really changed is that we don’t enforce a bedtime. Other than that, camping rules apply. They don’t seem to mind, though.

Here are our Family Camping Rules

We go to campgrounds where we can hook up to water and electricity, and that means we’re usually somewhere with a decent cellular signal, and sometimes even at a campground with its own WiFi. I often need to work while we’re away, so this is a good thing—I can bring my laptop and get stuff done. But I try very hard to limit that work to lunchtime and a few hours in the evening, and the kids are expected to put away their phones and other devices for the majority of the trip, as well. They complain, and we get the occasional, “But you’re online!” (pointing out that I’m working and would much rather be doing something else isn’t always well-received), but everyone survives. I think the kids especially love it when I point out that Laura Ingalls never even had an iPod.

Before we leave on a camping trip, I buy all of the snacks we never have at home. Potato chips? Sure! Preservative-filled cookies? Why not! Neon-colored popsicles? Practically a camper’s birthright. I also plan out our meals (which do tend to be healthy, and I even bring a crock pot in the camper) and do things like stock up on fresh fruit and chop veggies and make dip. But while we’re on the road, if you’re hungry, eat whatever you want. You’re getting plenty of fresh air and exercise; if you want ice cream before dinner, it’s all good.

We tend to do a lot of hiking and swimming and going and doing, but we also view camping trips as a great time to do… not much. At the very least, we tend to hang around the camper for a few hours of downtime after lunch. We bring stacks of books and usually everyone reads, but sometimes we grown-ups sneak a nap then, too. A midday lazy break is good for everyone. Even the dog takes a break from stalking squirrels to have a snooze.

A really nice thing about a camper vs. stuffing gear into your car is that we have a variety of items that just live in the camper and are always on hand once we arrive, like a stack of board games. With the kids’ busy schedules, we’re lucky to have a family game night once a month, at home. While we’re camping, though, there are endless games of Rummikub and Uno and Yahtzee, and every night after dinner there’s an hour or two of Apples to Apples or Qwirkle or Fluxx. Some of my fondest camping memories are about those games around our little table rather than the places we’ve been or cool stuff we’ve seen. Plus, playing games is a great way to pass the time between dinner and….

Unless it’s raining, we have a nightly campfire. And unless the aliens replace me with a pod person, every time we hitch up the camper, we have sufficient supplies to make s’mores for about a hundred people. I’m not even sure everyone in the family likes s’mores. There’s just something sacred about that nighttime semi-circle around the fire with your family, roasting marshmallows. One year we mixed it up with some Jiffy Pop, but it wasn’t the same. Marshmallows are required.

Camping Rule 6: This Is Family Time

Do a couple of teenagers, as a general rule, want to be stuck in the woods with their parents? Don’t answer that. One of the nice things about this camping setup is that we can go for a couple of days on very little notice. We used to do longer trips, but lately it’s a weekend here or there, where we can slot it in-between everyone’s scheduling demands. That’s okay. On the occasions when one kid is off doing something else, we’ll let the other kid bring a friend… but we still do the same sorts of things. The kids get some time on their own, sure, but we all hang out together more often than not. It’s not fancy or extreme or exotic. It’s just all of us being together, in the fresh air, away from most of the demands of everyday life.

I’ve gotta say, the older they get, the more I appreciate being able to drive to somewhere pretty and hold my teens captive there. Uh, I mean, spend quality time with them. While eating potato chips.