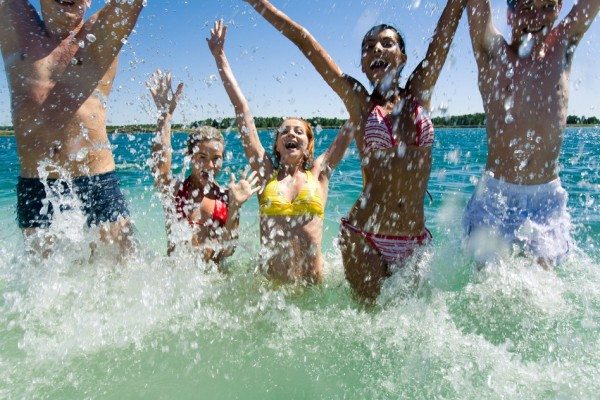 A Summer Manifesto For The Big Kids

There’s a no-man’s land, I think, in those big-tween/young-teen years, when it comes to summer break. The kids are too old to really need supervised care of some sort, but they’re still too young to get a job. Back when I was a kid, I attended camp pretty much full time as soon as school let out, until I was 14—at which point I got a job and worked every summer. But nowadays (at least around here), other than babysitting, jobs for younger teens appear to be a thing of the past. There’s still plenty of ways to keep the kids busy both in and out of the house, of course, and I have a lot of fond memories of my own camp experiences, but I guess I’ve come to view summer differently, over the years.

Call me a sap if you must (you wouldn’t be the first one), but once both my kids hit the teens, it really sank in that yes, they do grow up and aren’t going to be here with me forever. Their childhoods are going to be over in a few short years. This fills me with a mixture of panic over all I still want to instill in them before they’re no longer under my roof and wistfulness for simpler times, when teenagers weren’t expected to spend their summers doing things that will look amazing on their college applications.

Throw in a summer of extreme family stress and medical crises (last year), and years of a vague sense of what I kind of want for my kids has gelled into a manifesto of sorts for the summer months:

I have one child who does best when scheduled to the max and one who does better with a looser schedule, but either way, we tend to place a lot of demands on our kids during the school year, and I know very few kids (or people, for that matter) who don’t benefit from just stepping off the hamster wheel for a bit to recharge. I don’t want it turning into Lord of the Flies ’round here, but the first week or two after school ends, I just let the kids decompress and do as little as possible. For one kid that means sleeping a lot, and I figure it wouldn’t happen if it wasn’t necessary, right? So I try to bite my tongue as the kid who’s been up since 7:00 asks the one who just rolled downstairs for breakfast at 11:00 if she ever gets tired of sleeping. We won’t continue in a complete free-form manner all summer, but I try to remind myself even later on that this is their break, and the goal is to make it different from the rest of the year in the best ways.

I am not by nature a “Yes Mom.” Yes Moms say yes more often than they say no, even when it makes a mess or is less convenient than saying no. For a control freak like me, trying to balance a couple of high needs kids and working full-time from home, I’ll be honest: no is often a lot easier and more natural-feeling to me than yes. But I’m learning that yes is not only better for the kids, it’s better for me, too, because I can’t control everything, and I’m happier when I stop trying. So—within reason—yes it is. Yes, you can go ahead and bake (as long as you clean up when you’re done). Yes, let’s go swimming every day. Yes, you can gather up found objects and make art. Yes, invite your friends over as often as you like. Yes, let’s go for ice cream in the middle of the day. Why not? Better yet, why don’t you make some ice cream?

Despite what my parents (and my husband; we had very different childhoods) may say about summers spent leaving the house in the morning and running around with a pack of kids until dinnertime, I think in general our kids are so booked up with school and activities these days, they actually need to learn how to entertain themselves when presented with large chunks of free time. So… we go to the library every week. We have limits on screen time so that no one ends up watching TV or messing around on Facebook all day long. After the yay-school’s-over decompression period, we agree upon some basic scheduling, like that everyone will be up and have breakfast by 9:00. The kids are encouraged to look at various community schedules online and find things happening around town that they might like to do. And yes, I am the mean mom who still enforces summer bedtimes (albeit ones later than the school-time ones).

My kids have chores all year long, of course, but there are more chores in the summer because they have more free time. I try to balance out the agony of increased responsibility with things which are either 1) fun or 2) paid. (Hey, I’m not above bribery.) For example: both of my kids enjoy cooking, but it can be hard to work that into a homework-and-activity-laden schedule while school’s in session. During the summer, though, each kid is responsible for dinner one night each week. They pick their nights, and know that the meal has to be planned and the shopping list given to me on the weekend, and then on their nights they just have at it. We’ve been doing this for a few years, but I’ve noticed that lately they’re more likely to go beyond a bowl of cereal or a sandwich for breakfasts and lunches, too. And while they do their own laundry and clean their own bathroom during the year, over the summer I may offer an incentive for things like cleaning windows or digging out an overpacked closet. This is also when they do things like help in the garden, and rather than sewing on a button or ironing something for them, I’ll teach them how to do it themselves.

This is the age where we parents wake up one morning to discover we’ve become stupid and embarrassing overnight, and we’re lucky to get a disdainful eyeroll between text messages, sometimes. In spite of this, the counterbalance to saying yes a lot and letting the kids spend extra time with their peers is extra time as a family unit, too. We like to go camping, both because it’s relatively inexpensive and because we seem marginally less stupid to the kids when they’re trapped in the wilderness with us. Last year my husband took my son on a “guys’ road trip;” this year they’ve decided to make it annual event, and so I’m taking my daughter on a “girls’ trip,” too. It doesn’t have to be lavish or long; a few days of one-on-one time is a golden opportunity to reconnect and make memories.

Yep, it’s shaping up to be another perfectly ordinary, extraordinary summer. I can’t wait!

More on Teens and Summer: