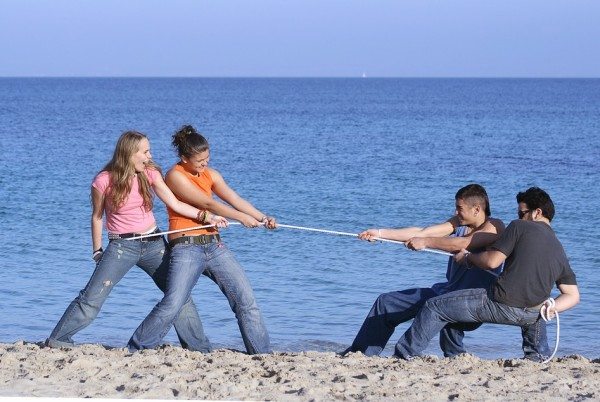 For a number of years, I wrote a weekly column for a parenting site about the joys and tribulations of working from home. I shared about everything from tax brackets to choosing a paint color for my office, from the process of forming an LLC to lamenting that I kept killing the plants on my desk. Every single year, at some point, I’d come around to the Summer Worry post: working from home during the school year is a very different thing than working from home when school’s out.

I think I was about two or three years in when someone commented on my Summer Worry post, “Don’t you go through this every year? How have you not figured it out yet?” The answers were yes, and no, because children—tricksy little developmental whirlwinds that they are—grow and change and need different things at different ages and stages. When the kids were small (really small, like need-constant-supervision small), there was no question that summer needed to include a full-time care plan, whether it be camps or babysitters or some combination thereof. The problem was that when they were quite little, my business was still new, and the cost of full-time care when I’d been managing with just public school and the occasional sitter for most of the year would quickly consume any profit I’d made. Later, I could afford whatever care they might require without it ruining me, but by then they were into those slightly older years where I could often keep them occupied and manage working while we were all in the same house (provided an occasional “I’m bored” or “he’s touching me!” wouldn’t throw me too far off my game).

Then I remarried and moved and my husband happens to be on the faculty of our local university; while I wouldn’t say he doesn’t work during the summers, his schedule is pretty flexible, and we’ve been able to tag-team the kids’ needs during the summer, for the most part. As the kids have gotten older, they’ve been happy to have a few unstructured months, too—there haven’t been any complaints about sleeping late, pursuing their individual hobbies/interests, lazy afternoons around the pool with their friends, etc. It’s been a long time since I worried about “coverage” for the kids the way I used to. Heck, if I needed to leave the house for eight hours a day, I could just leave them to their own devices at this point and they’d be fine. (Mostly. I think.)

I thought the Summer Worry would be a thing of the past, by now, but it turns out that it’s changed rather than vanished. With two teenagers, I no longer have to worry about appropriate childcare, but about “enrichment” and “balance” and “money.” Suddenly my daughter loves nothing more than to remind me that she only has a few summers left before college. I’m not sure what I’m supposed to do with this information. (Panic, maybe? Panic seems appropriate.) There’s a summer enrichment program she’s been begging to attend since middle school, and circumstances and finances have never rendered it possible (it’s in a neighboring state, and is a 3-week stint, so not exactly pocket change), but every year she begins lobbying for it shortly after New Year’s. Then there’s local classes; last year she talked us into paying for a course she wanted to “get out of the way,” and so for five weeks she did math for about six hours/day. Knowing that the enrichment program is probably never going to happen, she’s changed her priorities, a bit. Now she’s talking about getting a job so she has some money. Great idea! If only she was qualified to do… anything, really… or was driving (because I wonder who would have to ferry her back and forth to work…?)… or jobs were plentiful around here in the summer (they aren’t). And it turns out that the old “volunteering looks good on your college applications” thing is totally old-school, because now my kids’ high school actually has a volunteer hours requirement for graduation, so maybe we should be trying to figure out how they can get some of those out of the way over the summer. My daughter—taking after her mother, I’ll admit—pondered the options and declared, “But I hate people, so it seems like this is going to be problematic.”

Hmmmm. Then, of course, there’s my son. Mandatory volunteer hours? He’ll be game as long as it’s something he enjoys. I’m guessing there probably aren’t a lot of openings for volunteer Dungeon Masters (I could be wrong, of course), so I may need to put some extra thought into this one for him. He’s got more time to figure out what he wants/needs to accomplish before college, but he does love his lazy summer. He’d be perfectly content to hang around the house, swim, read books, and game online. (He is never the one who complains of being bored.) He doesn’t want to take a class or work (“Summer is supposed to be vacation!”) or do anything that requires wearing shoes, really.

I went to full-time camp every summer as a kid until I was old enough to take care of myself, at which point I usually angled for an enrichment program of some sort (nerdy theater stuff, mostly) that I could fit in around babysitting and other jobs. I was a full-time camp counselor at my son’s age, which—looking at him, even knowing we’re very different—now seems like a crazy thing, that I was entrusted with a gaggle of preschoolers as a young teen. I taught Sunday School when I was in high school, too. I bought my first car with babysitting money, and headed off to college knowing I could afford gas and the occasional pizza without whining to my parents. Nowadays you can’t even get someone to hire you to babysit unless you’ve got CPR certification, and the age at which I started a booming business (11!) seems dangerously young to me, now.

My kids should volunteer, hopefully not doing things they hate, but not necessarily doing things they love, either. They should also be learning the value of a hard day’s work. At the same time, the “real world” will suck the joy out of those lazy summer days before we know it, and I’m reluctant to take away their childhoods any sooner than is absolutely necessary. There’s a balance to be struck, I’m sure, but hell if I know where it is.

Hi, my name is Mir, and… it’s February, and yes, I am worried about summer.