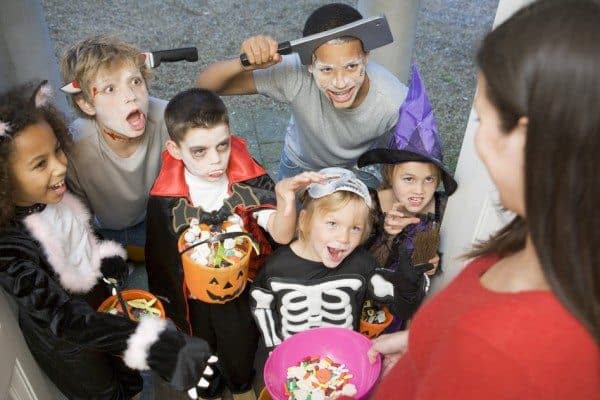 Halloween With The Teens

Halloween is almost here, and that means the Internet is chock-full of both outrage and advice for parents like me about what is good and right and acceptable.

Because… you must make a costume at home! Except what’s with the shaming of people who buy costumes, not everyone is a tailor, y’know! And these costumes are creative but those costumes are offensive and what’s with making kids grow up so fast but is that a teenager trick-or-treating? Unacceptable! Also: Candy! Food allergies! Etiquette!

Honestly. Once upon a time I went out trick-or-treating in a store-bought costume that consisted of a carcinogenic plastic poncho-thing and a mask that covered my face and limited my vision and didn’t make me look like Raggedy Ann so much as it just made me look like a demented paper doll with a sweaty face. I went out alone and took whatever I was offered and simply threw away the unwrapped candy and apples and popcorn balls at the end of the night. I’m not saying it was ideal, but it certainly didn’t include the hand-wringing and outrage that modern Halloween seems to entail.

I think kids should wear what they want (within reason, of course; if every “sexy”/racist costume out there disappeared, that’d be okay with me). If you like making costumes, great. If you want to buy a costume, great. I think anyone who gives out candy is nice, and if you can’t eat it due to dietary issues, here’s an idea—don’t eat it. (Before some allergy sufferer gets all up in my grill, listen: my son used to be anaphylactic to peanuts, even just from skin contact. He wore gloves when we trick-or-treated and either swapped out his unsafe candy with his sister at the end of the night or sold it to us. Problem solved.) I don’t care how old you are when you come begging for candy as long as you put a little effort into it; teenagers in regular clothes annoy me, because the idea is that you dress up, but if you’re wearing a costume? I don’t care if you’re collecting Social Security, I will happily give you some candy.

Halloween is supposed to be fun. I just don’t remember so many rules and self-righteous declarations about the right and wrong ways to dress up, distribute candy, wander the neighborhood, etc., from when I was a kid. (You know, back in the good old days when we didn’t have the Internet to tell us what to be mad about at any given time.)

I’ll never forget the first Halloween my oldest was big enough to go out; she was about 18 months, and her dad took her to maybe three houses before she decided she was done. She had no idea what was going on, but was pretty excited to discover that there was candy in her bucket. Somehow I had gotten it into my head that I could make her a costume, easy-peasy, and I felt like really I should, because already I was heavily pregnant with her little brother and feeling some guilt about cutting short her precious time as an only child. As a still-new mom I was receiving a bunch of parenting magazines every month, and one of them featured “easy to make” costumes for Halloween. I was immediately drawn to the instructions for making a “Little Stinker” outfit—a simple skunk costume fashioned from a hooded black sweatshirt and fake fur. The clincher was the giant skunk tail, stuffed with packing peanuts and suspended with fishing twine so that it would stay upright. So cute! And the instructions promised it was both cheap and easy. Even though I’m not a crafty type, I knew this was the perfect costume for my baby girl, and that even I could make it.

Well. Spoiler: I did finish it in time, and it was ridiculously adorable (the tail was nearly as big as she was), and she got tons of compliments during her short trick-or-treating jaunt. However, the “about an hour” project ended up taking me weeks to complete, as I discovered that fake fur is really, really thick and hard to sew. And don’t even get me started on what this “super-affordable” project ended up costing. At least I’d had the foresight to make it with a too-big sweatshirt, which meant that my daughter wore it for two years in a row, and then my son wore it for two years, and then I felt like I’d gotten my money’s worth out of it. Needless to say, that was the first and last time I opted for a magazine’s “simple DIY” Halloween costume.

Over the years, we’ve bought costumes, we’ve made other (easier!) costumes, and I followed the kids’ lead as best I could in terms of what they wanted. We’ve had a lot of very “punny” costumes—one year my son was a chick magnet (little fuzzy chicks sewed all over his clothes) and another year my daughter was the dog whiskerer (a pun on dog whisperer; she carried a basket of mustachioed stuffed puppies). We’ve canvassed our own neighborhood, gone to friends’ neighborhoods, done trunk-or-treat in church parking lots, and—as the kids grew older (and I grew more tired)—stayed home with bags of candy and watched movies. Sometimes we put out our chattering motion-activated skeleton who heckles visitors, and I wear my multicolored feather wig (festive!) and hand out candy, and sometimes we just put out a bowl of lollipops and call it a day.

Now that both kids are in high school and the world seems to have a lot of opinions about what they can and can’t do, I very much want to tell them to ignore the nay-sayers and do whatever they want, because the reality is that their childhood is nearly over, and Halloween is just supposed to be a good time for kids. On the other hand… when I realized that Halloween fell on a Friday and there’s a football game they’ll be marching at that night… I wasn’t exactly heartbroken. Problem solved!

But maybe there will be some Sour Patch Kids waiting for them when they get home. Just because.

More on Halloween and Parenting: