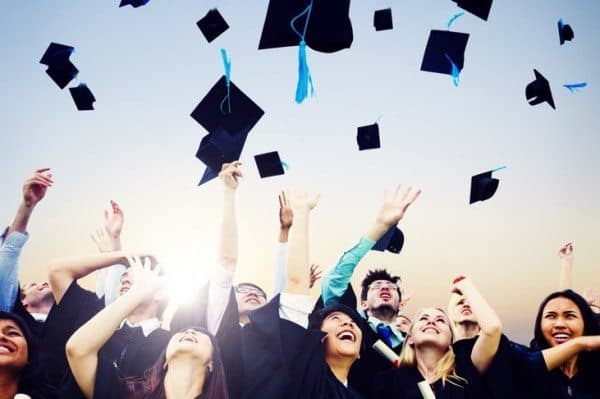 Great Graduation Speeches: Because We All Need A Little Inspiration

There are two kinds of graduation speeches, the ones that inspire you to live your best, boldest life and the ones that cause you to doodle in your program and maybe even nod off for just a moment. And since it’s graduation season, we thought we’d share some of the amazing ones.

I don’t believe there is one list of the absolute greatest graduation speeches of all time. Because for every person, it would be a slightly or very different list. But there are some speeches that seem to resonate with a lot of us. They make us think. They make us laugh.  They hopefully embolden us to be better, more courageous people whether we are 21 or 81. Even if it’s not graduation day for you or your children, these speeches will give a bit of inspiration to the daily grind of life.

The late Steve Jobs (creator of Apple and Pixar) was a genius and his graduation speech is quite uplifting. He may have been a tech guy but he understood the importance of following your heart and intuition. He told the graduates, “You have to trust in something — your gut, destiny, life, karma, whatever. This approach has never let me down, and it has made all the difference in my life.”

Jobs talked about getting fired from Apple (spoiler alert: he would work for them again), as one of the best things that ever happened to him. “The heaviness of being successful was replaced by the lightness of being a beginner again, less sure about everything. It freed me to enter one of the most creative periods of my life.”

And Jobs stressed that all of us must find what we love to do. “Your work is going to fill a large part of your life, and the only way to be truly satisfied is to do what you believe is great work. And the only way to do great work is to love what you do. If you haven’t found it yet, keep looking. Don’t settle.”

Hearing his words made me really wish he was still on this planet creating and motivating all of us to do better.

This is the graduation speech that wasn’t actually a graduation speech. The hypothetical commencement speech, called, “Advice, Like Youth, Probably Just Wasted on the Young,” was writing by columnist Mary Schmich (although it is widely and wrongly rumored to have been given by Kurt Vonnegut at MIT).

The memorable essay went viral via email and gave graduates practical advice like… keep old love letters, throw away bank statements, avoid beauty magazines, do one thing that scares you every day and of course wear sunscreen.  I do! I do!

This guide to life for graduates was written almost 20 years ago and still holds true.

I’m not the biggest Jim Carrey fan. But I love the graduation speech he gave at Maharisha University of Management (in Iowa by the way and obviously big Jim Carrey fans). In one poignant part, he talks about his father who could have been a great comedian but settled for a job as an accountant. Then his father got laid off. Carrey told the students, “I learned many great lessons from my father, not the least of which was that you can fail at what you don’t want, so you might as well take a chance on doing what you love.”

The speech intertwined inspirational moments and lots of humor. “The decisions we make in this moment are based in either love or fear. So many of us chose our path out of fear disguised as practicality. What we really want seems impossibly out of reach and ridiculous to expect so we never ask the universe for it. I’m saying I’m the proof that you can ask the universe for it. And if it doesn’t happen for you right away, it’s only because the universe is so busy fulfilling my order.”

This is a very under the radar convocation speech at Longwood University in Virginia given by Colleen Margiloff, the then President of the Alumni Association.

By the time I finished watching it, I wanted to get drinks with her and be her best  friend.  She’s conversational, funny and just real. She encouraged graduates to always tell loved ones how they feel, recalling how she was running late on 9-11 and never said a proper goodbye to her husband, who was headed off to look at real estate across from the World Trade Center. Thankfully, by late afternoon, she was able to reach him and confirm he was okay.

Margiloff told graduates to be bold, to vote, to get a mentor and never put anything on Facebook you wouldn’t show to your grandmother and your boss. My favorite advice is about tattoos, including a confession that she will have a dolphin tattoo on her ankle for the rest of her life.

When you watch Casey Gerald give the student address at Harvard Business School, you can’t help but think you are watching a future leader of this country. He’s incredibly poised, self confident and inspiring. And he does it without notes.

Gerald talks about a near death experience with gunmen in his home that altered the direction of his life. “A strange thing happened as I accepted that I was about to die – I stopped being afraid.” He made a decision to give his life to a greater cause than himself.

Gerald went on to found a non-profit, MBAs Across America, a movement of MBAs and entrepreneurs working together to revitalize America.

I’m a gradate of Tulane University and man, I wish someone like Maya Rudolph had given the commencement speech. (They got Ellen DeGeneres in 2009 too!). Although Rudolph’s speech is light on advice, it has a lot of laughs and even some familiar impersonations. She also encouraged the graduates to create their own destinies, hold on to their friends, kiss their mamas, work hard and put their damn iPhones away once and awhile.

She also pushed the students to admit their dreams – like when she admitted her dream of being on Saturday Night Live. She encouraged the graduates to say, “yes” and see where it might go – a reference to the rule of improv where you always say, yes and then add to the story.

Rudolph’s father attended Tulane and her cousin was in the 2015 class.

If you need to get motivated to get out there and kick some butt today, this speech is a good one. Sheryl Sandberg, the current COO of Facebook, is well known for her Lean In philosophy (she wrote a book about it) where she encourages women to rise to the top of their professions so females can become an equal voice at the table.  She urged the graduates of this women’s school to help stamp out gender inequality. She said, “We need women at all levels, including the top, to change the dynamic, reshape the conversation, to make sure women’s voices are heard and heeded, not overlooked and ignored.”

Sandberg encouraged the women to think big, believe in themselves and “go home tonight and ask yourselves, “What would I do if I weren’t afraid?”  And then go do it.” We could all follow that advice.

(Update: Here’s Sheryl Sandberg’s commencement speech from at UC Berkley to the 2017 graduating class.  It’s also very notable and memorable as she talks about her personal development after the unexpected death of her husband.)

What commencement address would you put on your list? We’d love to know. Inspire us!