Birthday Parties for the Sensory-Sensitive Child 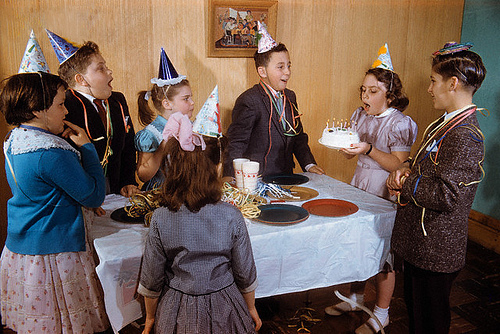 I just found your personal blog and am now reading your Advice Smackdown! My son, too, has sensory issues (all very similar to your son’s issues‚ although‚ I wish my son would chat me up‚ he’s not so back and forth conversational yet) and will be turning 5 soon.

I’m wondering if you have any ideas on throwing a birthday party for my special little man. Last year we kept it family because I thought it would be overwhelming to him to have all the neighborhood kids there‚ but then I had the mom guilt of not having “real” birthday party for him. It wouldn’t be so bad if I didn’t have a younger daughter who is developmentally typical and that I have thrown some pretty fun themed parties for. But alas, my guilt has set in‚ and I’m seeking cool ideas for his birthday this year.

We did the saaaaame thing last September, when Noah turned three. Skipped the birthday party altogether for fear it would overwhelm him (and me, honestly, since I was ’bout two weeks from giving birth at the time). And then the invites from classmates started piling up — all taking place at fun play centers and kiddie gyms — and I momentarily felt kind of guilty. And then we went to a couple parties at those “fun” centers and gyms, and immediately it was painfully obvious that we’d made the right call.

I’ve looked online multiple times for resources and ideas for throwing birthday parties for sensory-sensitive children and come up mostly empty — the majority of results are parents and therapists simply noting that birthday parties in general are a really, really tough experience for special kids like ours. (And before anybody mentions it, yes, we own The Out-of-Sync Child Has Fun. It’s a great resource for at-home OT activities that could certainly be incorporated into a birthday party [obstacle courses or tactile centers, for example] but I wish it addressed the start-to-finish experience of having your child attend a party without getting overwhelmed.)

I did throw a successful friends-and-family party at our home when Noah turned two, when his sensory problems were not quite as pronounced (although his speech was non-existent), and if I do anything for his fourth birthday this fall, I’ll take the lessons I learned from that:

Tips for hosting a party for the sensory-sensitive child

1) Know your child. I think there aren’t a lot of lists and ideas out there because every kid is so different, in so many subtle ways. Some kids will get anxiety from the mere presence of balloons (they could pop, squeak, etc.), some won’t. Some kids can’t blow out candles, can”t deal with organized activities, can’t handle touching things like crinkly paper and tape, can’t deal with drastic changes in their diet like cake and candy and chemicals. If there’s anything your child has a problem with, just…DON’T, no matter what “traditional” birthday party structure suggests.

Our party was successful because we managed (often unknowingly) to avoid the majority of our son’s triggers. We did not attempt ANY organized activities: no games, no &%$# parachute time, no forced opening-of-presents. The party spilled from our house to our backyard and Noah could come and go as he pleased. We had activity “stations” where he could at least play parallel with his friends (just outdoor toys for the most part: a tent, tunnel, inflatable bounce house borrowed from a friends, lots and lots of “aballs”), but we were never like, “AND NOW WE ALL SIT DOWN AND EAT CAKE.” No party hats, no hired entertainment, no pressure from the guests that Noah perform or engage in any particular activity. There were some tears when everybody sang happy birthday (he HATES “real-life” singing) and some drama over taking his shoes off in the grassy backyard for the bounce house (brilliant compromise that took me way too long to figure out: SOCKS), but overall, it was nothing that wouldn’t be expected from a “typical” overstimulated two-year-old.

2) Invite some camouflage. We ended up inviting more adults than children and this REALLY took the pressure off of us to ensure that children were entertained at. all. times. and took the focus off of Noah. Which, I know, it’s his birthday, but he didn’t want to be the focus. He wanted to run around and scream and be chased and then sit by himself for awhile. This is still REALLY true now, as he gets older and sadly a little more aware that he’s not quite like a lot of other kids. Today, I would still invite plenty of adults, a wide variety of ages of children (you know, mix in some two-year-olds so it’s not so apparent if your five-year-old isn’t behaving just like his peer group), and definitely the families we’ve gotten to know during our time in Early Intervention.

3) Don’t kill yourself on the theme. I don’t know if your son is like mine, but Noah’s “obsessions” tend to burn fast and bright. Depending on what day it is, we could throw a Cars party, a Thomas party, a Blue’s Clues party, a Three Little Pigs party, a Windmills party. (Yes, windmills. Boy was nuts about windmills. Carried around a brochure about wind energy for weeks.) Your son might never sit down and absorb the astronaut napkins you special-ordered online (or in our case, the bunches of bananas I tied bunches of balloons to, because by the time the party happened the boy was so. over. monkeys. Mama). Stick with simple ideas, like his favorite color, and keep activities to stuff you already know he’s experienced and comfortable with — party day might not be the best day to break out a brand-new superhero cape or a backyard waterslide.

If you’re looking to assuage mama-guilt over the planning disparity, focus your efforts on things like making really cool invitations (and preserving one in a photo album about the party) or opting for homemade cake and snacks instead of store-bought (generally a good idea for sensory kids anyway, since you can curb the exposure to food coloring and other artificial stuff). It’s just way, WAY more important that the structure of the day doesn’t throw too many curveballs to your son, and that he doesn’t feel like you’re expecting certain behaviors from him (SIT AND WATCH THE SCARY CLOWN, SON!), or that he’ll be disappointing you if he needs to go sit in his room for awhile.

4) Live and die by the schedule. It certainly hasn’t helped that a lot of the parties we’ve gone to have been smack-dab in the middle of naptime, or delay lunchtime until 2 pm, or offer cupcakes at 10 am. “When” the party takes place is just as important as “where.” In the rush of planning and preparing, make sure he eats a good, solid breakfast, offer a snack if you sense lunch will be delayed, commit to a reasonable party end-time and stick to it.

5) Lay off, afterwards. Congratulations! You threw a birthday party. Everybody had fun, only one kid toppled off the trampoline and the dog only ate three cupcakes. Your son had the time of his life playing with the sidewalk chalk. It’s tempting, I know, to get a little too excited by success — after an especially good family outing my husband and I are tempted to constantly quiz Noah on what he saw, how much fun he had, like we’re looking to extend our reign as Greatest Parents Ever. Instead, back off. Plan a quiet family dinner with his favorite food, talking about the day instead of asking questions about it, and introduce the new birthday toys as gradually as possible.

I’d love to hear ideas from other SID or Spectrum parents about their experiences planning and executing birthday parties for their children — what worked, what didn’t, what wildly exceeded their expectations or what exactly caused them to send everybody to bed early and drink copious wine afterwards.