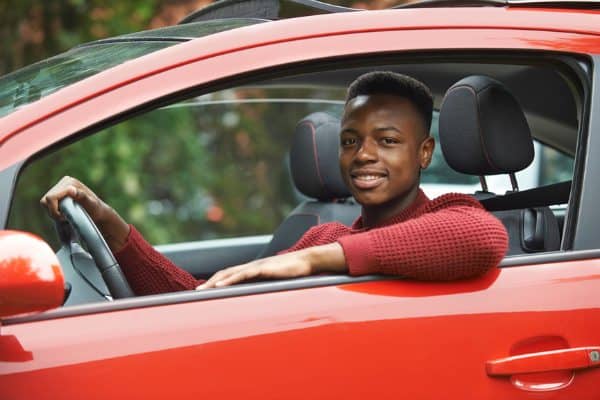 From the short-and-to-the-point files, Kate writes:

My son is signed up to take Driver’s Ed this summer. It’s going to be mostly me driving with him. Any tips or tricks for either one of us?

Because I’m super helpful, when I received this email from Kate I immediately mailed back, “Take tranquilizers.” But I was kidding! (Mostly!)

Teaching your teen to drive is a huge milestone for you both, and when we agreed to start teaching my oldest back at the end of last year, I sat down with my husband and begged him to take the helm. “You’re a better driver than I am, and more patient with her, too,” I said. “You’ll be way better at it than me!” My husband was willing, but the reality ended up being that my schedule is more flexible and I’m usually the one taking the kids places… hence, I’ve done most of the teaching. It was weird back when we started, then it got better, then I realized it was still challenging, and now we’re just a few weeks away from her getting her license. In the end, time flew. She’s a good driver and the learning process was good for both of us.

Different states have different requirements (or not) for formal Driver’s Ed training. While you’re unlikely to have an instructor do all of your son’s training, having a trained professional (in one of those cars with a second set of pedals and great big STUDENT DRIVER stickers) on board is fantastic. My personal opinion is that everyone should take Driver’s Ed. There’s a different dynamic with your parent than with a relative stranger, plus those teachers really know what they’re doing. In our case, my daughter didn’t start Driver’s Ed until she was already a fairly competent driver, so she headed out for each session with a brief conversation about what she felt like she needed to work on (parallel parking, highway merging, whatever) and then they’d go do a comprehensive session but with extra focus on that area. In your son’s case, if this will be the start of his behind-the-wheel training, ask the instructor who takes him out how he’s doing and what areas you should be working on with him, too. (Same concept, but in reverse.) Between you and the instructor, you’ll get a feel pretty quickly as to whether your son is under-confident or over-confident, and you can adjust accordingly.

Discuss the car rules up front

My kid (and hopefully your kid) knows not to text and drive, obviously. But my formerly radio-addicted kid decided very early on that she was not ready to listen to music while learning; she was concerned it would be too distracting. Will your kid find the radio distracting? Will he insist he won’t, but then fiddle with knobs on the road? These are the sorts of things to work out beforehand. Some people like to do a signed contract with their kids, but even a brief discussion about your expectations for safety is sufficient. That may include spelling out that any command you issue from the passenger seat while he’s driving is to be followed immediately and without question or he will lose the right to drive for some specified period of time. Don’t assume he knows the rules.

If your son is progressing well and willing to drive all the time, great! Let him. If he’s struggling with good habits, feel free to (gently!) point out corrections you’d like to see the next time you let him drive. And if he’s hesitant to practice, talk about it, address it, and either urge him along or take a break, depending on what you determine he needs.

When my daughter was first learning, I would tell her what to do and when to do it. It soon became apparent that this was leaving her waiting for my instructions instead of thinking on the fly; I switched to a more Socratic method of teaching, and asked a lot of questions, instead. This meant she both had to verbalize her plans before executing them, and that I was no longer her problem-solver. I would say things like, “Okay, looks like there’s three lanes up here. Which one should you be in?” And I would let her miss turns, too, and determine how to recover, or issue a mild, “Maybe you want to ease back off the shoulder?” if she drifted a little. I just stayed calm and assured her that as long as the car (and we) stayed in one piece, she was figuring it all out just fine.

View this as an exciting privilege

Listen, I know it can be terrifying to get in the passenger seat the first time you decide to let your kid drive out of that big empty parking lot and onto a roadway with other cars on it. I know. But trust me when I tell you that if you are sitting next to him coiled into a giant ball of stress and fear, he’ll follow your lead. Take as much time as you both need in wide-open, abandoned spaces to feel comfortable that he knows how to control the vehicle. And then start letting him drive short distances along easy, low-traffic routes, and act like you have been waiting your entire life for this moment. Learning to drive—and all it represents to young adults—really is an exciting time in our kids’ lives. You can be instructive and alert and cheerful and not scared at all, assuming you’ve done the preparation necessary and you’re both ready to hit the road. If your attitude says “You’ve got this,” chances are, he will.

Good luck to both of you! If I could survive teaching my teen to drive, anyone can, I’m sure.