Twitter Facebook Pin It Email Article
Prev Lonely Teen After a Move: Time to Intervene? Next Not Found in the Baby Book: Teen’s First Fender-Bender 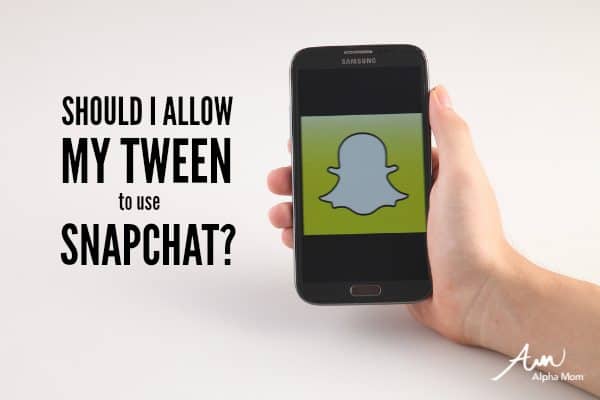 Should You Allow Your Tween or Teen to Use Snapchat?

My oldest daughter’s apps are killing me. How did this mother perish, they will someday ask? Oh, she just collapsed under the weight of trying to decide which apps were appropriate for her kid. Poor lady. I think it was Snapchat that finally did her in.

Before my tween (age 11) started begging me daily for Snapchat, her heart was set on Instagram. And despite the fact that Instagram is for kids 13 and older, most of her 5th grade friends have it and I finally relented. I made her set up a private account and only her friends and family can follow her.

But I barely had time to relax on my couch and peruse her Instagram feed before she was groveling for Snapchat.

Snapchat is a messaging app where users can share photos, videos, drawings and text.  It became well known because messages (known as “Snaps”) disappear a short time (one to 10 seconds) after being viewed or within 24 hours on an individual’s “Storyline.” Of course, we all know in the world of screenshots and servers – nothing really ever seems to disappear on the Internet.

If you want to understand the allure of Snapchat or has much as you can if you’re not a tween or teen, check out Buzzfeed’s very funny article, My Little Sister Taught Me How to “Snapchat” Like the Tweens. You will laugh but you will also be a bit concerned by how much time some young people are spending on apps like Snapchat. It consumes them and their time. You’ll also learn how to take a screenshot on Snapchat without anybody knowing about it (for realz).

So what’s good about Snapchat? Kids can express their creativity by picking filters and drawing on their photos and videos.  Also, there are no “like” buttons to press so there is no obsession over how many Likes you are getting as can be the case on apps like Instagram and Musical.ly.

Nancy Jo Sales, author of “American Girls: Social Media And The Secret Lives Of Teenagers,” told NPR’s Terry Gross that when it comes to social media, the number of likes and followers has taken teen popularity contests to a whole new level. She says, “What is new is that there’s now a number, there’s now an actual number of people or followers or likes that you can get to quantify how good you are, how interesting you are, how popular you are, and this is a new thing.”

So far, I’ve only allowed my kids to have private accounts on both Instagram and Musical.ly so they can’t amass a lot of likes anyway. But my oldest daughter is already begging me for a public Musical.ly account so she can acquire more likes.

What else is good about Snapchat? It presents a less polished image of people’s lives than Instagram does. Which is one of the things our own Mir Kamin liked about it when she tried Snapchat with her 17 year old daughter. Instead of creating some kind of high glossy, perfect storyline of your life, it’s more raw and real.  As author Rachel Simmons says on the New York Times Motherlode, “The short shelf life of these images lets teenagers abandon the need to emulate the perfectly posed celebrity, or to represent life as more fabulous than it really is.”

And for parents, who of course want to protect their kids from online predators, Snapchat feels safer because in order to exchange messages,  you need someone’s cellphone number, username, or scan their badge in person. Other messaging apps like Kik allow users to register without providing a telephone number and provide greater anonymity.  (Kik has been linked to some child exploitation cases including the death of a 13 year old girl.)

So far it sounds like Snapchat is pretty good so what is the concern? High school guidance counselor and mother Julie Savitz is not a fan of the popular app.  Savitz says, “It is dangerous – there is no way to track messages coming and going.”

Savitz says students use the app to bully other kids. It’s easy to do because the messages just disappear. “The information is lost but for students who are bullied, it’s a stamp on their self worth and it stays with them for years.”

The app has also been criticized for encouraging young people to sext or send inappropriate photos because of the perception that anything you send just disappears. This disappearing feature can also make it difficult for parents who want the ability to monitor what their children are sending and receiving.

And all social media comes with the famous FOMO (fear of missing out). You see photos of people at a party. You are not at that party. You feel very sad.

But that’s not a Snapchat problem, that’s with every social media platform which is why when my daughter recently went to a very small sleepover, I told her to not post photos of the gathering. “You can enjoy your friends without sharing it on social media.” She seemed unconvinced but followed my rule.

There is a version for kids under 13 called Snapkidz. Snapkidz allows users to snap, caption and draw but you can’t send or receive messages so as far as my 11 year old is concerned, she’s not interested. She wants to be communicating on Snapchat with her friends.

There are a few privacy settings on Snapchat. You can use a setting to only allow friends (those you have added to your list of Friends) to send you snaps.  This is under settings.  Change the option from “Everyone” to “My Friends.” You can also block someone from sending you snaps. Find them on your friends list, click and hold their name and you’ll find options that allow you to block them.

For now, I won’t let my 11 year old get Snapchat. I think she is too young to have Snapchat, despite the fact that some of her 5th grade friends do have it. Thankfully some do not and selfishly, I’m hoping the parents hold strong – at least until middle school.

But I’ve also learned something important about any app. Whatever you let your tween or teen have, the key is teaching them how to use it. What’s appropriate to post, what’s not. When you post, when you don’t. And this is an ongoing education because technology is always advancing and kids brains are still developing. I only have to think about all the dumb things I did as a kid and young adult (goldfish shots anybody?), to know that kids are prone to do very not so smart things.

I really love this article at Mashable about teaching your kids about online etiquette (No, nothing horrifying will happen if you don’t send that super annoying chain email to your 10 best friends) and social media rules for your kids.

And quite often I tell my kids, shut off the phones, put them in a drawer and find something creative to do that doesn’t involve a screen. And yes, for a moment, they will look at me blankly and then they’ll let out a deep sigh and within a few minutes, they are drawing or reading or playing with one of their siblings or building a fort or playing a card game or something else very old school and kid-like. There are no snaps, chats, likes or postings. And it’s a pretty beautiful thing.

Does your child use Snapchat? What are you feelings on this popular app?